Sheridyn Runs After’s poem “I Killed It” is a Topical Winner in the 2019 Live Poetry Society of NJ’s “Inside of Me” contest. Runs After will have her poem published in an anthology of poems submitted for the contest.

Runs After is a freshman at Cheyenne-Eagle Butte High School and the daughter of Gordan Runs After and Ashley Peterson.

The young poet looked for possible contests online for which her poem would qualify and submitted her poem to that contest. When she learned that she placed and would be published, she said she was surprised.

Writing poetry “helps me express feelings I didn’t even know I that I had,” Runs After said, which is a sentiment of many great writers who consider writing as much a process of discovery as it is a process of creation.

Runs After believes she wrote her first poem for a class assignment in elementary school and has been writing ever since.

It will find you, it always does

Is useless, it will always be in the comments

I sit in the dark

I made up my mind

I walked to the kitchen

It followed, thinking he had won

I grabbed the knife

Turned, and did what had to be done

I beat it at his own game

Before society could kill me 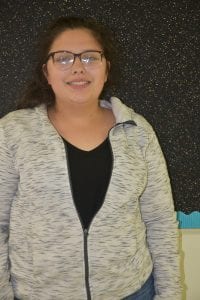