Hypnosis… Is it real? 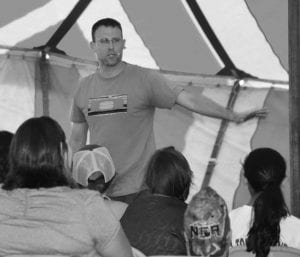 Hypnotist Kellen Marson explaining his instructions to the volunteers.

After the hot dog eating contest was over, Kellen Marson, a hypnotist out of Sioux Falls put on a show under the tent. 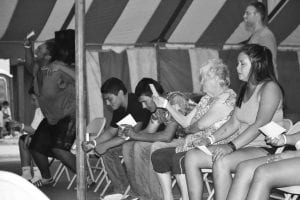 One of the volunteers was overwhelmed with joy once he was handed a “winning lottery ticket” worth one million dollars. 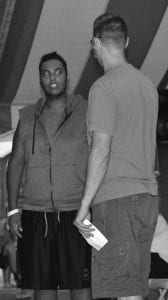 Only to find out that he donated all of the money shortly after winning.

Look out!! Susie Payne, Evanna Dupris, and Sunni Dupris braced themselves as Kellen Marson told them a boomerang had hit them. 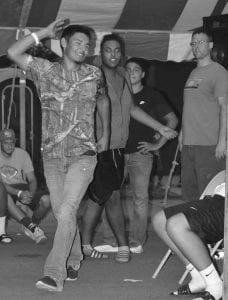 While everyone else was “sleeping”, Kellen told the guys that they are now models on the runway. They strutted their moves for a while before he woke up the rest of the volunteers. Kellen told them they will awake at the hypnotist show… only to be stuck to their chairs!!

According to kellenmarson.com, Kellen has done well over 1,200 comedy hypnosis shows and has put to “sleep” more than 15,000 people.

The “best of the best” volunteers for a Stage Hypnosis Show have the following qualities: