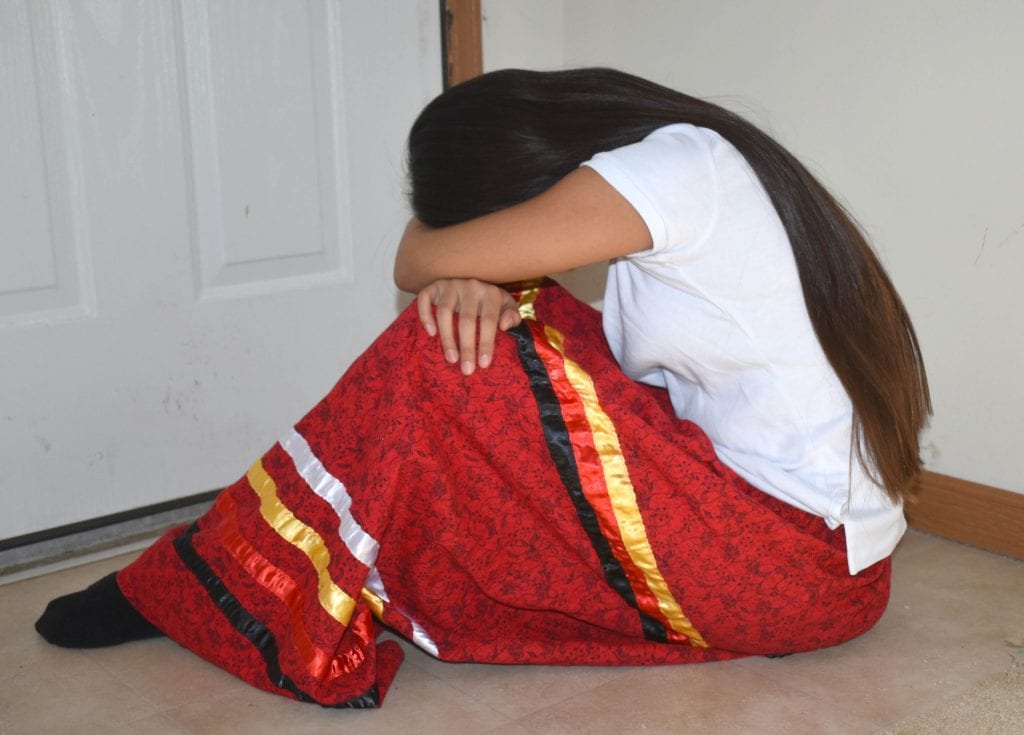 EAGLE PHOTO BY ALAINA BEAUTIFUL BALD EAGLE
The victims of human trafficking and violence often feel alone and helpless. The Sacred Heart Center wants people to know that they are here to help, 24 hours a day, 7 days a week. The center also offers a women’s group and free counseling services.

According to Human Trafficking Search, “Human trafficking is a form of modern-day slavery, in which human beings are controlled and exploited for profit. Perpetrators use force, fraud, or coercion to manipulate and establish control over individuals.”

And it is happening on Cheyenne River. Since becoming the Sacred Heart Center Coordinator and Sexual Assault Advocate last year, Jessica Ashley has worked with three victims of human trafficking.

The Sacred Heart Center began in 1982, providing a soup kitchen, second-hand clothing, and offering shelter for battered women and children. Since then, their services expanded to individual and family counseling, emergency shelters for domestic violence victims, and providing sexual assault and advocacy services.

Lately, the topic of human trafficking has gained national and international attention, and advocacy and awareness campaigns have increased on Cheyenne River. The Keystone XL Pipeline and the impending man camps are of particular concern for many advocacy groups, including Sacred Heart Center.

With the amplified attention on human trafficking, SHC has increased the amount of training their employees receive regarding human trafficking. They are also working on bringing awareness to Cheyenne River.

“We’ve not only stepped up training, we are working on getting more grants to do more awareness projects. We also plan to do outreach at schools, especially at Takini where the pipeline is going to be so nearby,” Ashley said.

Poverty and human trafficking go hand-in-hand, and often, perpetrators target areas with high poverty rates. And on Cheyenne River, the poverty rate is shocking. According to the Tribal Ventures Voices Report, the median income for families is $18,156, and after annual expenses, families are left with $4,101 per year of discretionary income.

“Because we live in an area with many families living poverty, human trafficking is so easy. Trafficking is trading for goods and favors, than it is more for money. It’s very prevalent here on the reservation,” Ashley said.

A 2017 report from the Institute for Women’s Policy Research, corroborated Ashley’s concerns.

Decades of poor data collection when it comes to the Native American population have resulted in inaccurate data and more often than not, very little data.

“We don’t have a lot of numbers and data available. This is something Sacred Heart is working on,” Ashley said.

Proper and adequate data collection begins with partnerships, and that is what SHC is working on. The data collected by the center is shared with state agencies, local law enforcement and the Cheyenne River Health Center. Ashley explained that this network is vital not only to all organizations involved, but is important for bringing resources to CRST.

Many victims do not know that they were experiencing trafficking, and more alarming, is that the perpetrators are often someone that victim knows and trusts.

“In most cases, the victims don’t know that they are being trafficked until they learn what human trafficking is. And violence goes hand-in-hand with it. There is emotional and physical abuse. The victims can become submissive, confused and disconnected from their family and friends. They are controlled by the perpetrators, who will do anything to have power over the victims,” Ashley said.

This control includes exploitation of alcohol dependency and addiction to drugs and opioids. The escalation of meth use has reached epidemic levels, and in response, some tribal nations such as Oglala and Standing Rock have declared states of emergency.

Below is information about human trafficking from the Sacred Heart Center:

Signs of human trafficking when someone is victimized:

• Not free to come and go at will

• Individuals have few or no personal possessions

• Is not in control of personal identification documents

• Are you being controlled by threats and deception?

• Are you earning money that you can’t keep?

• Are you being isolated from friends and family?

• Is your family unaware of your location?

• Does someone else have control of your identification?

If you or someone you know might be a victim of human trafficking, there is help. You can notify law enforcement by calling 911, or you can call the National Human Trafficking Hotline at 1-888-373-7888. You can also talk with someone at the Sacred Heart Center in Eagle Butte.

“There is always someone here. For anyone who thinks they may be a victim, or if you need someone to talk to, we offer a women’s group that meets four times a week, and we offer counseling where we listen without judgement. Sometimes victims who are exploited use drugs and alcohol- it does not matter to us, we are here to help you,” Ashley said.