The average age of Lakota and Dakota speakers is 70. We are running out of time to save them.

Published in the New York Times

Ms. Archambault is a Hunkpapa and Oglala Lakota woman and former special assistant to the president for Native American affairs under President Barack Obama.

CANNONBALL, N.D. — Over four centuries, nine out of 10 Native Americans perished from war or disease. Now our people are dying from Covid-19 at extraordinarily high rates across the country. North and South Dakota, home to the Lakota reservations, lead the United States for coronavirus rates per capita. We are losing more than friends and family members; we are losing the language spoken by our elders, the lifeblood of our people and the very essence of who we are.

Last year I lost my uncle Jesse (Jay) Taken Alive and his wife, Cheryl, to the virus. My uncle, a former chairman of the Standing Rock Sioux Tribe, was a leading proponent of efforts to revitalize the Lakota and Dakota language. Lakota and Dakota are dialects of the same language; if you speak one, it is easy to understand the other, though some words and accents are different. After he retired from politics, he taught our language to public-school children.

The task is urgent. In 2020, there were only 230 native Dakota and Lakota speakers on the Standing Rock Reservation. Two hundred and thirty speakers — down from 350 in 2006, according to the tribe’s surveys. There are only a couple of thousand speakers, in total, in the United States and Canada.

As Covid-19 takes a fearsome toll on our people, it also threatens the progress we have made to save our languages. The average age of our speakers — our treasured elders who have the greatest knowledge and depth of the language — is 70. They are also those who are at most risk of dying from Covid-19.

Before the pandemic, we had been making progress. Cultural warriors young and old had created immersion schools, including on the Standing Rock, Pine Ridge, and Rosebud Reservations. The Lakota language program at Sitting Bull College in Fort Yates, N.D. — Lakȟól’iyapi Wahóȟpi/Wičhákini Owáyawa — pairs young children with adult speakers.

Now we are mourning the loss of instructors who helped revitalize the language at Sitting Bull College — Paulette High Elk, Delores Taken Alive and Richard Ramsey, all of whom died of the virus last year. We celebrate when others recover: Thomas Red Bird, Earl Bullhead.

That we still have Lakota speakers at all is a miracle. Earlier generations were removed from their land and families, to boarding schools that beat children for speaking their native tongue, and more recently, to classrooms that nearly erased their Lakota culture.

We cherish Lakota speakers, because the language they speak embodies a beautiful worldview — alive and harmonious — based on a harmonious relationship to one another and to Mother Earth. Lakota speakers live by the values hard-wired into that language.

The reach of our languages has been felt far beyond North and South Dakota. Global sustainability movements have adopted Lakota concepts like “Water is life” (Mni Wichoni), the understanding that life does not exist without water; “We are all related” (Mitakuye Oyasin), the interconnectedness of all energy in the universe, including humans; and planning for the future (Thokatakiya awoyukcan etan oyuhapi), the idea that we must care for future generations in all our actions.

The cultural richness our languages contribute to the world is no less vital to life on this planet than biodiversity. Nor is it any less valuable than the cultural contributions of the rich or descendants of people from Europe.

On Standing Rock, Lakota elders who are fluent in our language will be prioritized for the vaccine. I exhaled a breath of relief when Grace Draskovic and Ruby Shoestring, fluent elders and teachers at the immersion nest who have remained free of the virus, received their first dose of the vaccine. Other tribal nations should do the same.

We are running out of time. We are losing the links that bind thousands of generations to the present day. We are losing our chance to inherit their understanding of what it means to be human.

This is why it is critical that we have a coordinated federal Covid-19 response. The governments of North and South Dakota have failed us. President Biden now has an opportunity to help. That means providing the highest quality health care and preventive measures on reservations, and a top-down reform of the Indian Health Service, a long-neglected treaty right. Finally, the next federal budget must fully fund tribal language restoration programs; we are asking for $750 million a year — a pittance compared with the resources expended over the centuries to destroy our languages and cultures.

Rather than dwelling on our suffering, consider the extraordinary resilience of my people. Covid-19 has only strengthened our resolve to honor and protect our elders, the languages they speak, and the wisdom they carry. I believe that if Americans knew what we’re facing, they would help us. If history has taught us anything, it is that generations to come will need that wisdom more than we can imagine.

My uncle Jay used to perform a ceremony to welcome the thunders back in the spring. He is gone, but we will welcome back the thunders. If not this spring then the next. 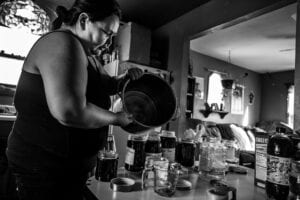 From the Editorial BoardFrom the Interim EditorHome Improvement and Garden Tips