(Editor’s Note: The following story is being reprinted with the permission of Stars and Stripes, which retains all rights. The story originally ran on June 25, 2019 on www.stripes.com)

A bill introduced Tuesday would rescind 20 Medals of Honor awarded to soldiers who received them for actions during the Wounded Knee Massacre in 1890, when hundreds of Native Americans were killed by U.S. cavalry soldiers.

“I believe the introduction of this bill today shows the continued work and strength of the Native American people who have fought for over a century for the United States to acknowledge the genocide of our people that has taken place on this soil,” Haaland, the daughter of a Marine and one of the first Native American women elected to Congress, said during a news conference on Capitol Hill.

Tuesday was the anniversary of the Battle of the Little Bighorn, where Lakota and other Native American tribes defeated the 7th Cavalry, which 14 years later fought at Wounded Knee.

The massacre happened Dec. 29, 1890, on what is now the Pine Ridge Indian Reservation in South Dakota. Soldiers with the 7th Cavalry attacked a camp of Native Americans, killing hundreds of men, women, and children.

The Cheyenne River Sioux Tribe passed a resolution in 2001 asking for the Medals of Honor to be rescinded and the National Congress of American Indians has also requested the medals be rescinded, according to a news release about the bill announcement.

The Medal of Honor is the nation’s highest award given for valor in action by the military against an enemy. Later Tuesday, President Donald Trump is to award the medal to former Army Staff Sgt. David Bellavia, the first living American to receive it for actions during the Iraq War.

Heck pointed out that only 23 Medals of Honor, to include Bellavia, have been awarded for the Global War on Terrorism, whereas Wounded Knee had 20 alone. He said he was at the news conference Tuesday because he honors servicemembers who have earned the medal, but the 20 medals from Wounded Knee do not belong with the other recipients.

Also in attendance were descendants of survivors from the massacre, including Marcella LeBeau, 99, a member of the Cheyenne River Sioux Tribe who served as an Army nurse during World War II including the D-Day invasion. She was awarded the French Legion of Honor for her service during the war. She said on her reservation there is a “pervasive sadness that exists there because of unresolved grief” and she was there Tuesday because healing needed to happen.

“So we are here today to ask that you revoke those Medals of Honor,” she said.

Manny Iron Hawk, chairman of Heartbeat At Wounded Knee 1890 and a member of the Cheyenne River Sioux Tribe, described how his 12-year-old grandmother survived the massacre and others who were attacked were shot at such close range that it caused powder burn marks on them.

“So, there was no honor in these murders. And the Lakota, we live with these traumas to this day,” he said. “Our lives are reminders of our courage, strength, and the will to survive in the 21st century.”

At the end of the news conference, the descendants of survivors of the massacre gave gifts of blankets and jewelry to the representatives. Haaland was also given an eagle feather plume and a Lakota name, Defender of the Wounded Knee People, for being a voice for the Lakota Nation.

Emotional from the honor, Haaland said, with tears in her eyes, she “will do everything in my power to live up to this name.” 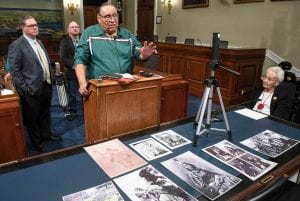 With ancestral pictures in front of him, Manny Iron Hawk of the Cheyenne River Sioux Tribe speaks at a Capitol Hill press conference on the Remove the Stain Act on June 25, 2019. At left is Rep. Denny Heck, D-Wash., one of the bill’s sponsors; behind them is Oliver “OJ” Semans, a Navy veteran and member of the Rosebud Sioux Tribe. At right is 99-year-old Marcella LeBeau, a member of the Cheyenne River Sioux Tribe who was a 1st lieutenant in the Army Nurse Corps during World War II. The bill would rescind the Medals of Honor awarded to soldiers involved in the 1890 Wounded Knee Massacre. Photo by Joe Gromelski / Courtesy of Stars and Stripes, All Rights Reserved 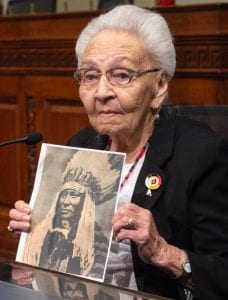 Holding a picture of Rain In The Face, a relative who fought in the Little Bighorn battle, 99-year-old Marcella LeBeau speaks at a Capitol Hill press conference on the Remove the Stain Act on June 25, 2019. LeBeau, a member of the Cheyenne River Sioux Tribe, was a 1st lieutenant in the Army Nurse Corps during World War II. The bill would rescind the Medals of Honor awarded to soldiers involved in the 1890 Wounded Knee Massacre. Photo by Joe Gromelski / Courtesy of Stars and Stripes, All Rights Reserved