The Homeless Shelter in Eagle Butte is growing their own food right outside their door.

Austin Reddog, the New Hope Therapeutic Garden coordinator, says having the close connection with mother nature is therapeutic and encourages compassion among those that help with the garden.

The shelter employees encourage people who stay there to help maintain the garden, and in return they earn incentives. The more hours they put in, the closer they are to receiving their incentives, which are work clothes or anything they might need in order to get a job.

They grow their own food because they want to be self sustainable and have food security. After everything’s grown and harvested, they plan on selling whatever extra food they have in the Farmers Market in August – September. 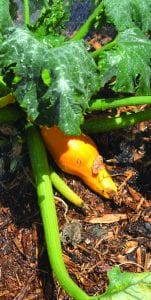 One of the items grown are delicious summer squash.

They want to incorporate traditional and cultural preservation, which involves showing compassion for plants and people — all living things.

The shelter also has a greenhouse they are trying to put together, but it was not built for the wind we get in South Dakota, so they had to reinforce it with wood.

Reddog said that they plan on getting glass plates for it and want to grow year round.

Funding is through the TECA program and approved through the USDA along with Partnership with Native Americans located in Rapid City.