Greta Thunberg visits Cheyenne River with the message to “Be unafraid”

16-year old Swedish climate activist Greta Thunberg visited Takini School on Monday evening, October 7. The teenage phenomenon has been on a cross country tour of the United States, sharing her message about the global climate crisis and devastating impacts of climate change. Earlier this month, she gained international attention when she condemned world leaders at the United Nations Climate Summit in New York City.

As part of her national tour, Greta’s schedule included visits to the Pine Ridge, Cheyenne River, and Standing Rock Sioux Reservations to see for herself the lands and people impacted by the proposed-Keystone XL Pipeline and the now-complete Dakota Access Pipeline. Her plans include visits to oilfields in North Dakota and the Tar Sands in Canada. 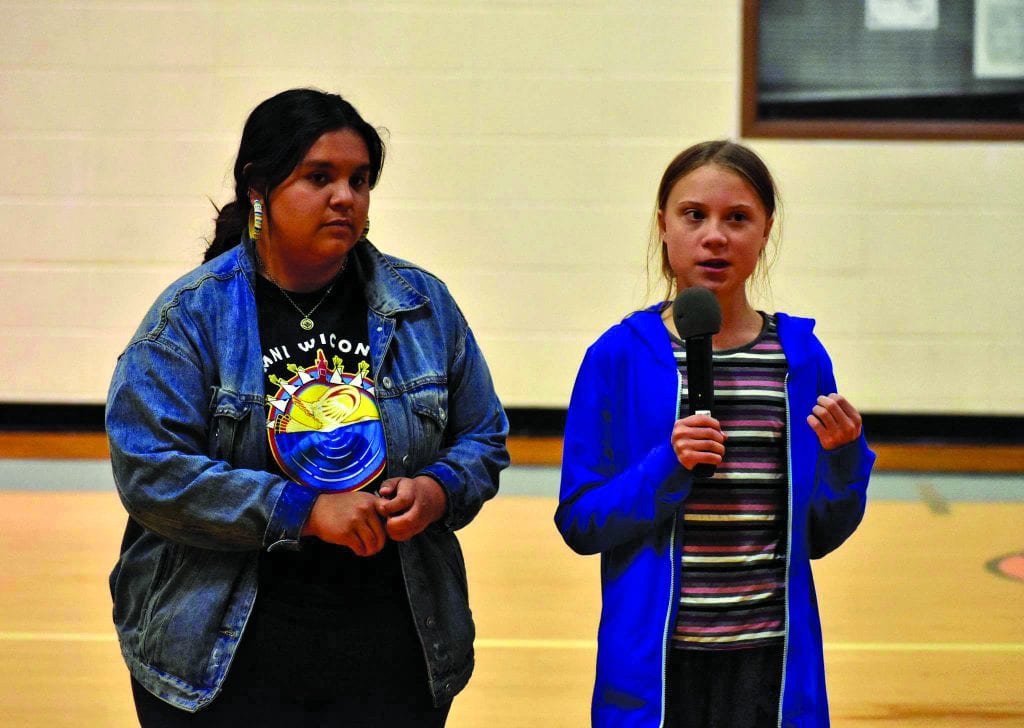 EAGLE PHOTO BY ALAINA BEAUTIFUL BALD EAGLE
Tokata Iron Eyes and Greta Thunberg made a stop at the Takini School on Monday, October 7. Thunberg is on a cross-country national tour to raise awareness about the global climate crisis.

Her first stop in the Dakotas was on Sunday, October 6 on the Pine Ridge reservation where she was joined by well-known climate and indigenous rights activist Tokata Iron Eyes. Both young women sat on a panel and discussed topics about the climate crisis and the importance of listening to the indigenous people impacted by the crisis.

The next day, the pair traveled to Rapid City where they were joined by hundreds of people who marched with them to the mayor’s office, demanding immediate action to address climate change. According to a Rapid City Journal report, Greta spoke out about the KXL Pipeline, saying that it was “not morally defensible” and that “its construction would be counter to the United Nations Paris Agreement’s goal of preventing a 2.7-degree temperature rise — an increase that scientists say would lead to catastrophic climate damage.”

After the rally, the young women, along with their delegation which included Greta’s father, a team of journalists, and Tokata’s father, Chase Iron Eyes, began their drive to the Standing Rock Sioux Reservation, where Greta and Tokata were scheduled to stop for a panel discussion on Tuesday, October 8.

With meticulous planning, and with the school schedule in mind, plans were made to stop at Takini School to meet with students. Chase said the stop was of great significance because of the importance of the community, both historically and in modern times. Takini is home to many descendants of the survivors of the Wounded Knee Massacre, and is located just miles from where the proposed KXL Pipeline is scheduled for construction, said Chase.

EAGLE PHOTO BY ALAINA BEAUTIFUL BALD EAGLE
Students and community members gather together for a group photo after Greta Thunberg and Tokata Iron Eyes’ presentation at the Takini School gymnasium on Monday, October 7. Greta was presented with a blue Takini School sweatshirt as a gift of thanks from the school.

Around 5:30 pm, Greta and her group arrived at the school to meet with students who stayed for after-school activities and a large group of community members who gathered in the gymnasium.

Takini School Superintendent Kit Veit greeted them and first introduced Remi Bald Eagle, who performed the welcome address before turning over the floor to Dana Dupris, who conducted a prayer to open the session.

Greta and Tokata took center stage and introduced themselves, explaining to the assembly their work and projects they have taken on. They also talked about being young voices in the world.

“You’re just never just one person and you’re never too young to make a difference in any way. Even though we might live in small places and we might come from places that a lot people don’t hear about, you have the power of your ancestors and a global community around the world who wants to stand up with you,” said Tokata.

Greta said that there have been many critics who have used her age to try to discredit her and her message, but that behavior did not discourage her and should not discourage young people from taking a stand.

“We refused to be silenced. We will always speak out. Speak up for what you think is right. Let your voice be heard. Be unafraid,” said Greta.

Tokata added that indigenous people are working together with non-native activists like Greta to bring awareness to climate change and environmental injustices around the world, particularly among indigenous people. She then encouraged the students to educate themselves about environmental issues that are impacting their communities, such as the KXL Pipeline.