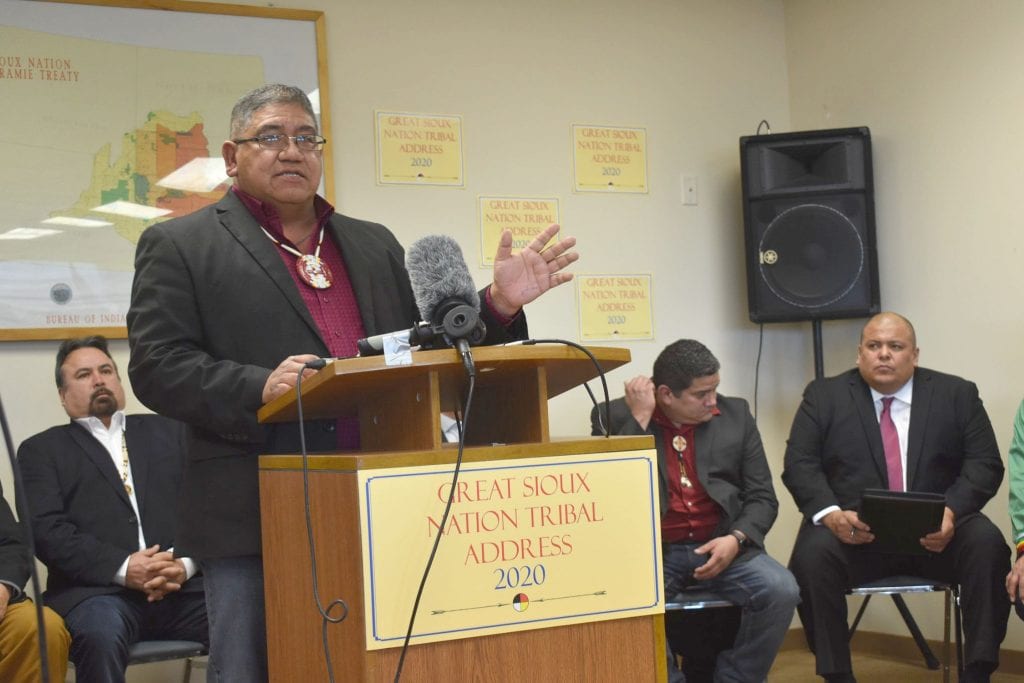 The historic gathering was a chance for the leaders to discuss important issues that impact their nations. Over 60 people packed the room to capacity and many news outlets were in attendance when CRST Historic Preservation Officer Dana Dupris gave the opening remarks. Arvol Looking Horse then conducted the prayer before the eagle staff and colors were brought in.

The gathering lasted over two hours as the 10 tribal leaders each presented information pertinent to their nation.

CRST Chairman Harold Frazier spoke first, addressing the crowd in Lakota before explaining that the gathering was not meant as a competition with anyone, rather, it was the tribes’ sovereign right to assemble on their ancestral lands.

“We didn’t draw these lines on these lands and call them South Dakota, North Dakota, Nebraska- they did. The Lakota people, the Dakota people, we have our own way of life that is still here. Our ancestors shed blood, gave their lives to protect that way of life for us. So, we need to honor them by living and practicing their ways,” Frazier said.

In his speech, Chairman Frazier also discussed missing and murdered indigenous women and tied in his concerns about man camps with the proposed Keystone XL Pipeline. The chairman asked how the United States would ensure the safety of Native women with the influx of men which pipelines and man camp brings.

“How are they going to be controlled so they will leave our women and children alone?” he asked.

The next speaker was Fort Peck Tribal Councilman Jestin Dupree from Montana. He discussed his tribes’ concerns with the KXL pipeline and the lack of meaningful consultation from the corporation. He said his tribe has submitted a letter asking the State Department to facilitate a meeting between the tribes and TC Energy (formerly TransCanada). 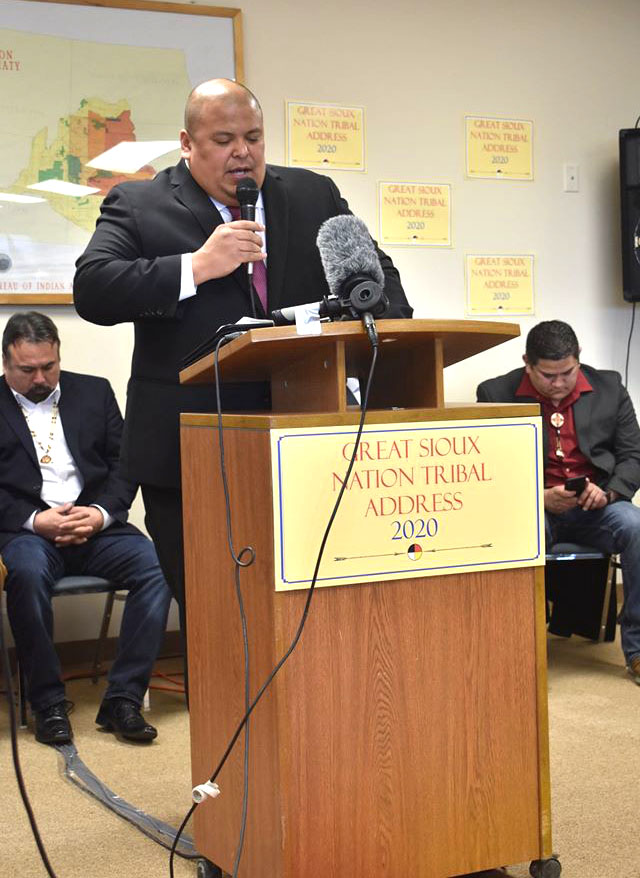 “We will continue to oppose the KXL Pipeline and we stand in support of fellow tribes facing similar situations,” Dupree said.

The councilman also discussed the drug epidemic on the Fort Peck Indian Reservation, stating that an in-patient treatment in Poplar is in the final stages of construction. He also conferred the challenges of providing adequate mental health care because of the rural location of his reservation, and said it was a priority for his tribe.

The next speaker was Rosebud President Rodney Bordeaux who stressed unity among the tribes before explaining how the methamphetamine epidemic has affected his people. Although there is a 40-bed treatment facility operating on Rosebud, Bordeaux said his tribe plans to create two more facilities, as well as a detox center with the goal to address alcohol and opioid dependency. 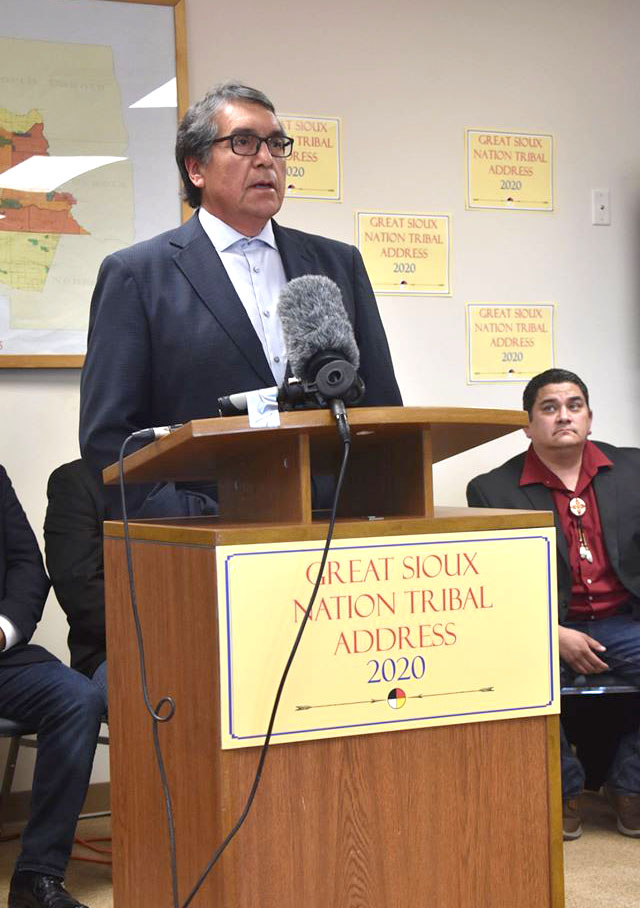 As far as mental health the chairman explained that there is poor service in rural areas, and that his tribe is working on expanding telehealth services for those regions.

KXL was also an important subject, with Bordeaux explaining that his tribe continues its legal case against the pipeline.

“We not only have to protect our environment, we got to protect our water. We are looking at seven generations forward, not only for our citizens, for all the citizens in our area,” he said.

Next was Lower Brule Sioux Tribal Chairman Boyd Gorneau, stating that meth has caused a strain on the tribe’s judicial system, law enforcement, and detention facilities. The chairman commended other tribes who have declared states of emergency due to the meth epidemic, calling the moves “much needed”. 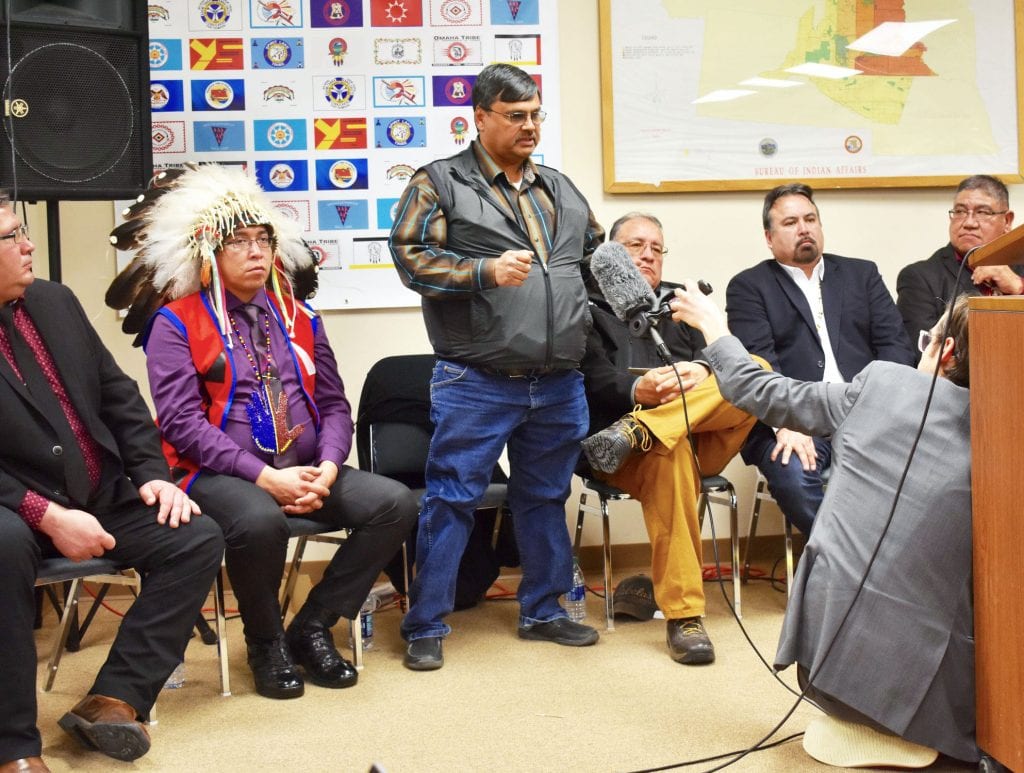 The chairman also brought up human trafficking and the high rates of missing Native Americans within the state.

“We must protect those who cannot protect themselves. I’ve seen way too many missing persons posters. It tugs at my heart. We cannot have any more missing brothers and sisters, children, mothers,” Gorneau said before stating that the Great Sioux Nation as a collective, must declare a state of emergency against meth and human trafficking.

Regarding the proposed KXL Pipeline, Gorneau said his tribe is “unequivocally against the project” and that he “will not consult or compromise with big oil” before adding, “we do have to protect the water protectors.”

Gorneau then shifted to education and asked the state to provide tuition-free education for all tribal members attending state educational institutions.

Speaking next was Yankton Sioux Tribal Chairman Robert Flying Hawk, who spoke for several minutes in Dakota before addressing the crowd in. 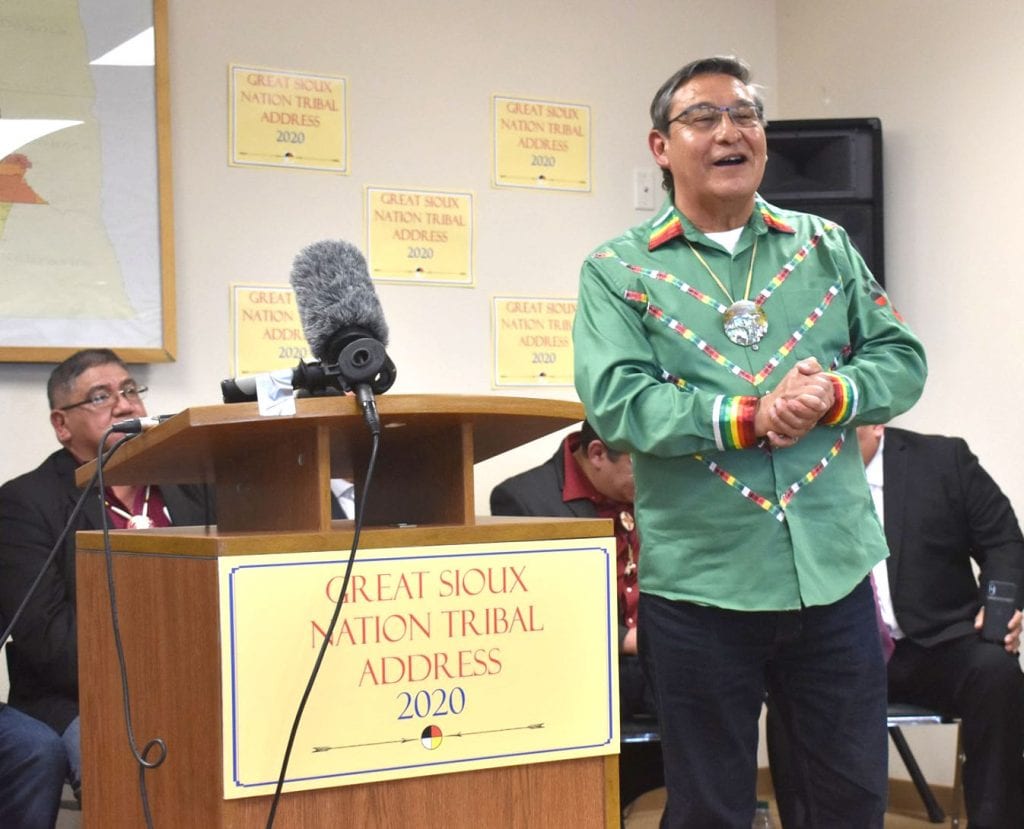 Flying Hawk shared that he frequently thinks about the ancestors and how they agreed to treaties with the government in exchange for what they were told would be protection of lands and freedom to live peacefully; however, those treaties were often broken with the Indian on the losing end.

“For us as a people, we have been taken advantage of. We are a straight forward, honest and true people,” he said.

The Dakota leader also expounded upon the devastating floods that occurred on his reservation, sharing his frustrations about the failed requests for assistance with government agencies.

Flying Hawk asked for unity and compassion between tribes and government officials before turning the floor over to Sisseton-Wahpeton Sioux Tribe Chairman Donovan White. 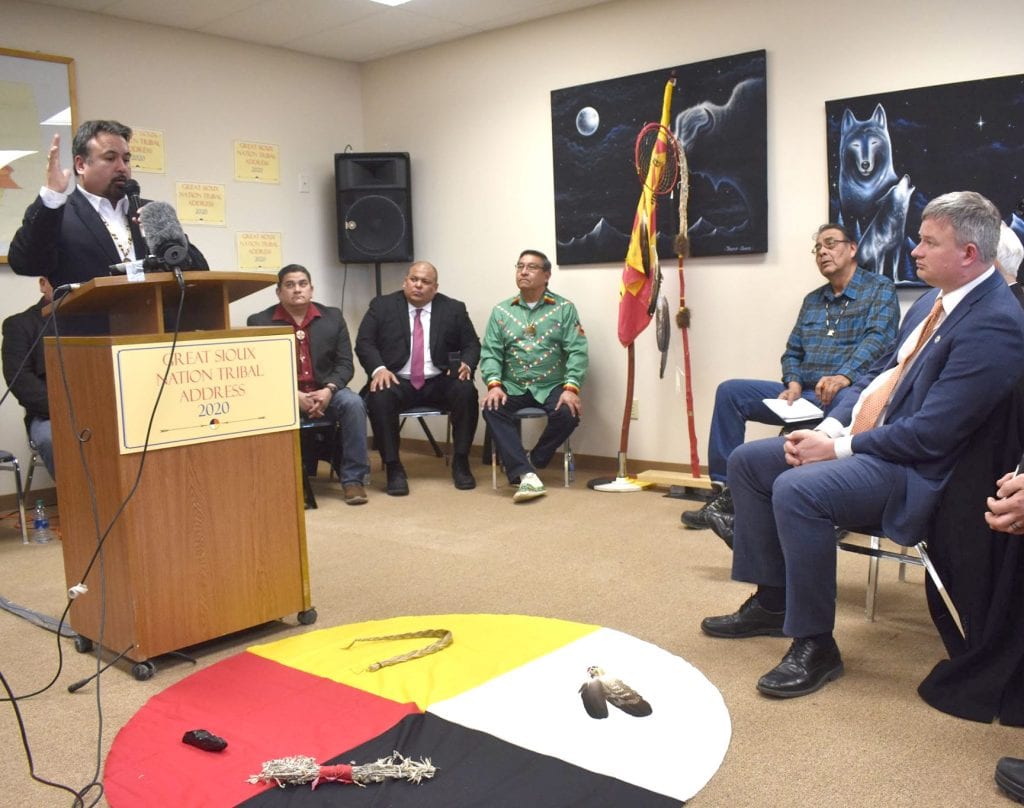 White said the tribes need to move into litigation and suing the federal government for failing to uphold their trust responsibilities.

“We are done talking about these things. We need to move forward…we need to start litigating and stop pointing fingers and start fighting. We gave up a lot. And all we’re asking for is a little dignity, what’s obligated to us through these treaties,” White said.

Just the day prior, Chairman White met with North Dakota Governor Doug Burgum and the State Legislature about concerns affecting his tribe, including the epidemic of meth use. White then directly addressed Attorney General Jason Ravnsborg, who was seated near the front row.

“There is not no walls around our reservation, so our problems with meth are also your problems, attorney general,” said White who then requested funding for treatment centers, as well as long-term aftercare. 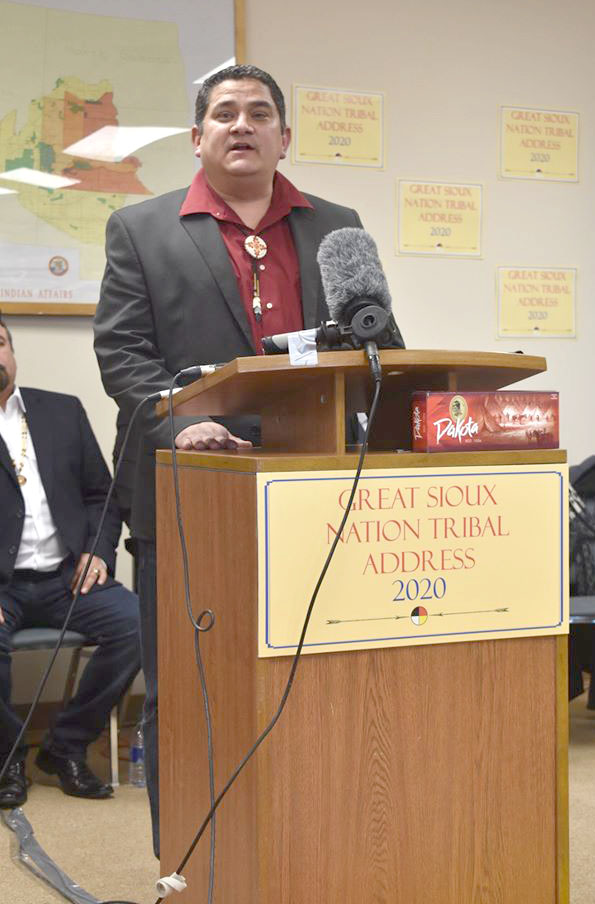 Flandreau Sioux Tribe Chairman Tony Reider spoke, asking for unity among the Canadian and Minnesota Sioux tribes. Reider said his tribe faces many similar challenges that the previous chairmen discussed, but that he was optimistic about his nation’s new venture in growing industrial hemp, and encouraged other tribal nations to do so as well. 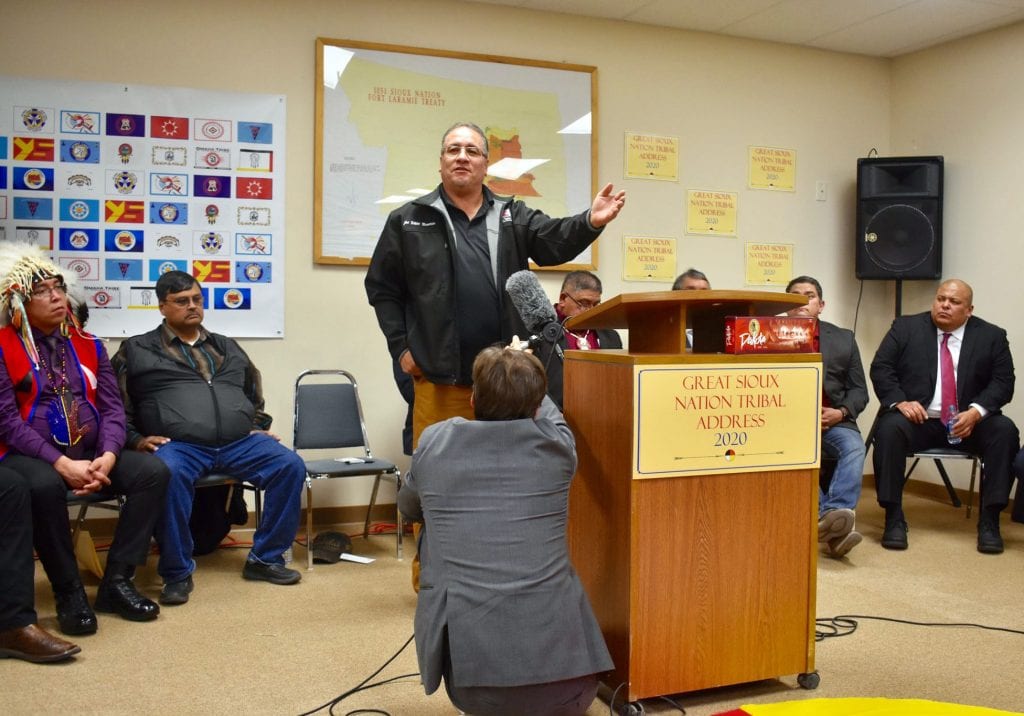 Standing Rock Sioux Tribe Bear Soldier Councilman Joe White Mountain spoke next and said his Oyate (nation) is also facing similar challenges that the previous tribal leaders discussed. He added that his tribe is working to create better the Child Protective Services in his area. Between 180-200 students are placed in foster homes, in large part, due to the devastating effects of alcohol and substance abuse.

The councilman explained that the tribe is working with the state to secure funding for the tribe’s CPS, and that the tribal council recently passed a resolution to license foster homes off the reservation within a hundred-mile radius. 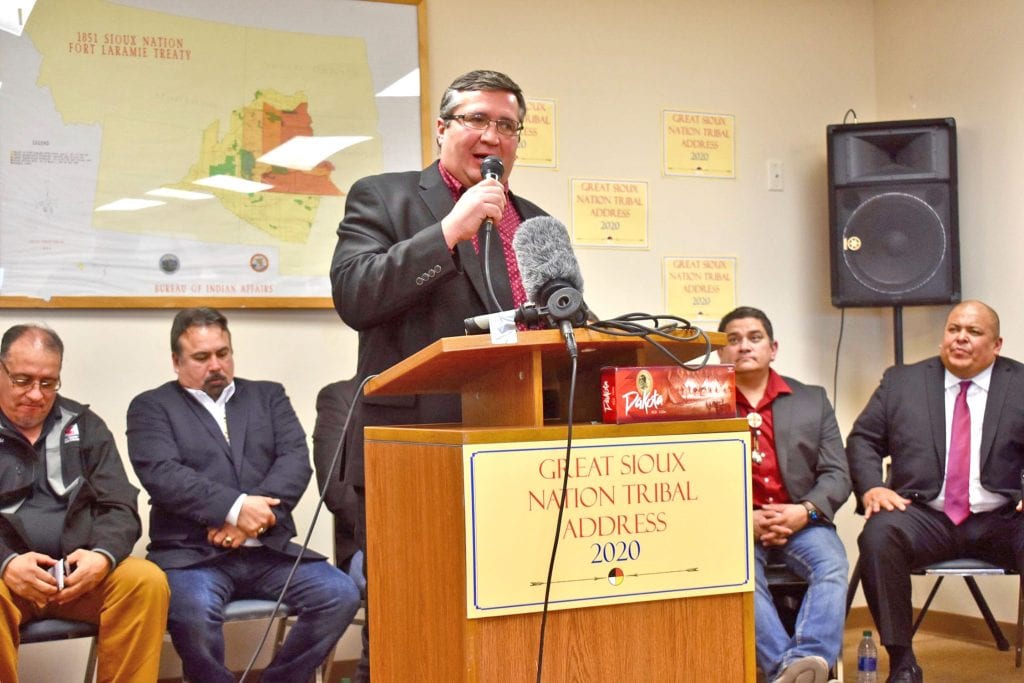 Crow Creek Chairman Lester Thompson Sr. then took to the podium and said that unity among the tribe is vital and emphasized the importance of communication as well. Thompson recalled a time when he worked with Chairman Gorneau to help catch a known-drug dealer. Thompson, who had delivered the State of the Tribes Address earlier that day, kept his speech short before giving the floor to Oglala Sioux Tribe President Julian Bear Runner. 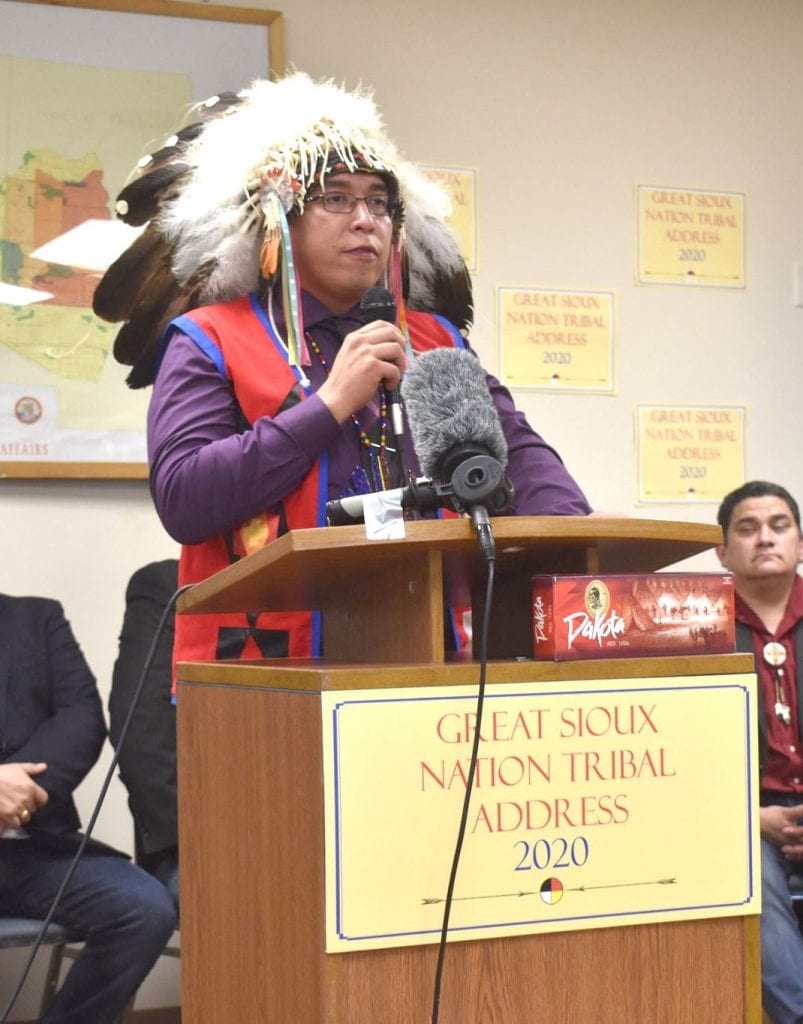 The Oglala President took the microphone and called for remembrance of the traditional leadership, lineal descendants, and traditional chiefs, stating, “It’s unfortunate that today, we are only recognized by our IRA government.”

Bear Runner also called for unity among the tribes and encouraged leaders to continue fighting for treaty and inherit rights of the Sioux nations.

Dana Dupris announced the floor was open for the media to ask their questions. One reporter asked the leaders their thoughts on the new “riot boosting laws” introduced by Governor Noem.

Chairman Frazier said that before the arrival of the Europeans the people followed natural laws which were guided by the canupa, and that man-made laws came about after treaties were introduced to the people.

“Their [the government] law says they will protect the resources from depredation. It should be the government defending great Sioux nation and all these illegal laws hurting our rights and our resources,” said Frazier.

“If our civil liberties are violated again, we’re going to fight it,” said Bordeaux.

The tribal leaders answered more questions from the media before ending with a prayer and meal.

No one could recall the last time the tribes gathered together on this scale, and the chairmen expressed desire to continue in the unification of their nations.

“The reunification will just make us stronger in terms of getting what we need to get done serving our people…We just laid the ground work for it again. A lot of my ancestors who’ve gone before me wanted to do this, so I’m just playing a small part in making this happen. It’s going to happen,” said Chairman Boredeaux.