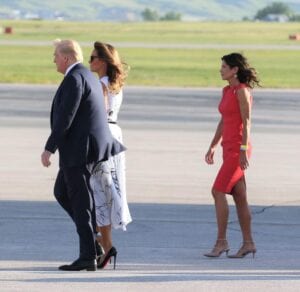 Shortly after fireworks display above Mount Rushmore on Friday, Gov. Kristi Noem accompanied President Trump aboard Air Force One despite having had close contact with Donald Trump Jr.’s girlfriend, Kimberly Guilfoyle, the day before.

Guilfoyle, a top fundraiser for the Trump campaign, tested positive for coronavirus in South Dakota before she was set to attend the fireworks display at Mount Rushmore.

The evening before, Guilfoyle was at a Trump campaign fundraiser called the “Rapid City Roundup Retreat” in Rapid City. Photos from the event show that she was not wearing a mask and that she hugged Gov. Noem before posing for photos with her.

According to Noem’s spokesperson, Maggie Seidel, the governor did not wear a mask on Air Force One and chatted with the president as the flight returned to Washington, D.C.

The governor tested negative for coronavirus shortly before welcoming Trump to South Dakota on Friday.

Ian Fury, another spokesperson from the governor’s office, said Monday on Twitter that the governor “conferred with the White House doctor immediately before boarding Air Force One, and he confirmed it was safe for her to travel” with the president.

Dr. Shankar Kurra, vice president of medical affairs at Monument Health, told the Rapid City Journal that for those exposed to COVID-19, symptoms typically take three to five days after exposure to appear.

“If you have no symptoms testing for COVID-19 probably won’t show positive results until three days after exposure,” Kurra told the Journal.

According to the Center for Disease Control guidelines, when a person is exposed to a someone who has tested positive for COVID-19, they should stay home until 14 days after the last exposure, maintain social distance, and self-monitor for symptoms.