At this year’s annual CRST Powwow, a dance occurred which many people on Cheyenne River had never seen before – the gourd dance. Considered a warrior’s dance, the gourd dance originated long ago from the Kiowa people, and spread to the Comanche and the Cheyenne.

In modern times, gourd dances are a common occurrence in the southwestern region of the United States, and are oftentimes their own affair, organized by gourd dance societies such as the renowned Kiowa Tia-Piah Society. It is also common practice for gourd dances to occur during breaks in powwows, before grand entries. 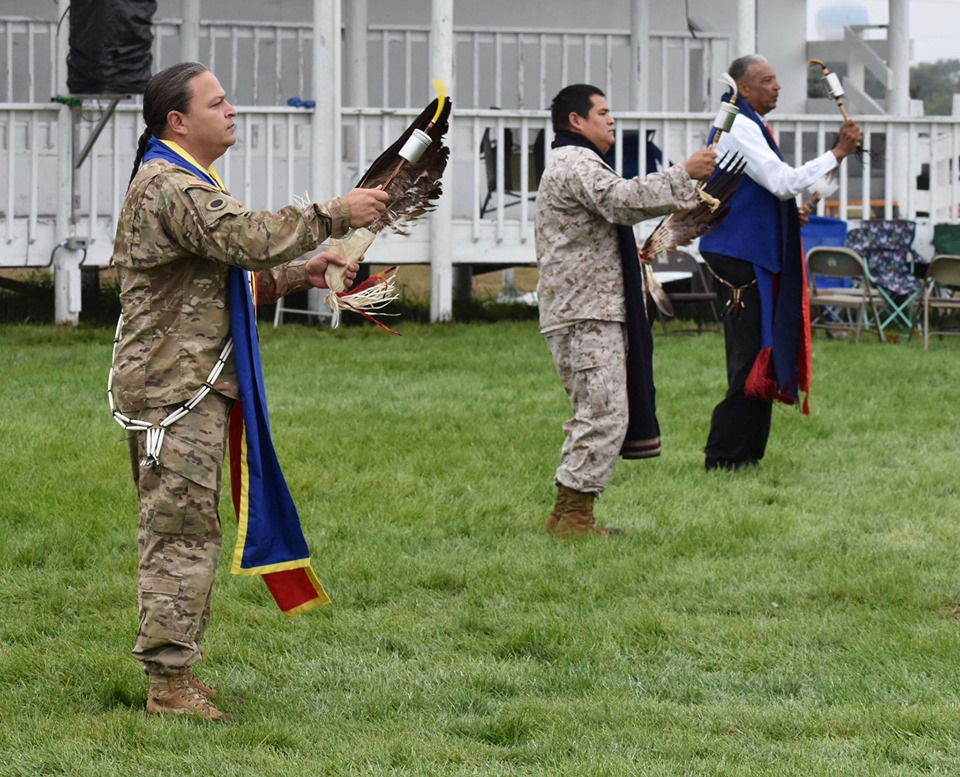 The gourd dance is a men’s dance, sometimes  referred to as a gentleman’s dance, that requires different regalia than what one would normally expect to see at local powwows. The men dress in slacks, buckskin leggings, button-up or ribbon shirts, and sometimes military uniform. They also wear a red and blue gourd blanket over the shoulders, or a long stole that drapes over their neck and hangs down the chest.

According to powwows.com, “The blanket is made of red and blue wool and represents day and night. A bandolier made from mescal beans is worn across the chest from one shoulder to below the waist. Gourd Dancers either wear boots or moccasins.”

The dancers carry a stainless-steel or natural gourd in one hand and a fan or set of feathers in the other. To open the dance session, the “Calling Song” is first performed, with the dancers standing in place, shaking their gourd to the beat of the song. The head gourd dancer will begin to dance, at a slow tempo, moving his feet and his gourd to the rhythm of the song. The other dancers join in and begin to make their way around the dance circle, all while shaking their gourd. As the song changes to a louder beat, the dancers stop in place and lift up their heels as they shake their gourds harder.

The women, typically draped in fringed-shawls, dance in place, on the outside perimeter of the dance circle.

A gourd dance session will normally consist of four sets, with four songs in each set. At the end of each song, the dancers howl and shake their gourd to honor the wolf, from whom the Kiowa tell the dance is from.

Origin, decline and revival of the gourd dance

In a 2017 interview on Native America Calling, Kiowa Gourd Clan President Tim Soodle (Kiowa), said the oral history of the gourd dance tells a story that long ago, there was a Kiowa man who got lost from his people, and after days of wandering alone, thirst and hungry had beat the man down until he was ready to give up.

The man went to a hill in preparation of his imminent death, but then he heard something in the distance — upon investigating where the sounds came from, the man saw a wolf singing and dancing with a gourd. The man approached the wolf and it was then he was given the gifts of the songs, gourd and dancing, and was instructed to carry the knowledge to his people.

According to Soodle, in the 1800s, the U.S. Army forced the Kiowa people onto the reservations and outlawed their dance and ceremonies, nearly exterminating the people’s traditional knowledge and participation. However, in 1957, at the American Indian Exposition in Anadarko, Oklahoma, a Kiowa man named Fred Tsoodle gathered up five of his elderly tribesmen, and dressed in traditional clothing, they sang and performed two gourd dances, a rare event that gained the support of the community and tribal members. Not long after that, the first modern-day gourd dance society was created, and thus, the gourd dance was revived, said Soodle.

So just how did the gourd dance come to Cheyenne River? The idea sprang from a conversation between two CRST veterans, U.S. Marine Corps veteran Duane Curley and U.S. Army veteran Remi Bald Eagle. Both had previous gourd dancing experience, Curley during his time stationed in Camp Pendleton, California, and Bald Eagle during his visits to the Southwest.

Both members of the Akicita Okolakiciye, the Warrior Society, and the Tokala Kit Fox Society, the men approached the idea with their fellow Tokala members, U.S. Army veterans and Tokala Vice-Commander Dale Picotte, and Tokala Secretary/Treasurer Chris Duesing.

After a consensus was reached to dance, the group submitted a request to CRST Powwow Committee for times to gourd dance. Three sessions were approved for Saturday morning, Sunday afternoon and again on Monday morning, each before grand entry.

The group then began organizing and planning the gourd dance, and as luck would have it, this year’s host drum was a southern drum who knew gourd dance songs and agreed to perform them.

American Indian Warrior Association President and Purple Heart recipient William Buchanan, of San Diego, was invited to be the Head Gourd Dancer. Curley knew Buchanan from his time stationed in California, and had a history of gourd dancing with him.

“l first experienced gourd dancing in 2011. I met a gentleman [Buchanan] who introduced me and brought me into the gourd dance circle. The first powwow I danced at was Pechanga Powwow,” said Curley.

Buchanan accepted the head dancer role and traveled to Eagle Butte with not only extra regalia, gourds and feathers, but his willingness to share knowledge of the dance. Buchanan was prepared to face the fact that gourd dancing was foreign to the area, and he would be teaching people the meaning and ways of the dance.

The first session occurred on Saturday morning, with unfavorable weather conditions — fog, cold, and slight rain. Except for the host drum, the MC, three dancers, Buchanan, Curley, and Bald Eagle, and a few of their family members present, the powwow stands were completely empty. The gourd dance proceeded, with the MC explaining the Calling Song and Buchanan opening the session with his initial dance steps.

As the session progressed, a handful of curious campers from the nearby campground began to make their way to the powwow arbor. Some, bundled in blankets, sat in the bleachers, interested to what was occurring in the dance circle.

Another gourd dancer joined in, bringing the number of dancers to four. The session ended uneventfully, with a total of 16 songs performed.

The next day, however, was a different story. It was a much bigger affair, with over 20 dancers joining in, with many veterans from Akicita Okolakiciye Warrior Society, American Legion Post 308, and the CRST Veterans Association taking part. Many people sat in the bleachers with their phones recording the event, and more women danced on the outside perimeter.

“The people who were gathered around witnessed what was happening the first day, and they went and told others about it. News about the gourd dance spread quickly through word-of mouth-spread and more people were prepared to attend and participate on the second day,” said Bald Eagle.

Indeed, some veterans who had, at some point in their lives, gourd danced before, took out gourds and regalia that had been packed away for years. One such veteran was Army veteran Lyle Cook, who brought a gourd that was passed to him after the original owner, his wife’s uncle, had passed away. Cook said he had gourd danced before while living in Denver, but that it had been over five years since he danced.

“It was good to have that experience refreshed and to get that guidance from the head gourd dancer. It was really good to dance with my nephews, DJ and Duane, and with Remi, and the other veterans,” said Cook.

So moved by the event was Cook that he donated a star quilt to the Cheyenne River Veterans Association to be presented to Buchanan in appreciation for his role and bringing the gourd dance to the people.

As the last song of the gourd dance was performed, participants shared their thoughts and emotions about what had occurred:

“Some veterans danced for the first time. Watching them dance and react to the gourd dance was healing and encouraging. The gourd dance was an opportunity to develop a sense of community with my fellow veterans and tribal members. It was a great time to sing, dance and reflect on how I can better serve my tribe. I hope that we can do more gourd dancing in the future,” said Bald Eagle.

“I thought it was amazing to see the Tokala and gourd dance societies come together in front of the people. I was excited to take part in it and experience several cultures working together. It was a lot of fun and I look forward to doing it again in the future. I would like to see gourd dancing continue on CRST and to see more veterans take part,” said Duesing.

“The dance is easy to learn, since the music is very uplifting and raises your spirits in a positive way. The gourd dance was a good turnout. The head gourd dancer was very welcoming and eager to learn how we do things here. I heard a lot of positive feedback. A few suggested to ask for it again next year. My hopes for gourd dance is to make it a couple times a year event and invite more veterans to participate,” said Curley.

It is uncertain how a gourd dance society will be implemented on Cheyenne River, but the seeds were planted at this year’s powwow, and for the veterans who participated, it brought healing, a sense of belonging and unity.