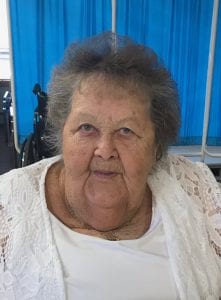 Funeral services for Gloria “Joan” Webb, 85, of Eagle Butte were at 10 AM, Friday, March 13, 2020, at the All Saints Catholic Church in Eagle Butte. Ken Ripley was officiating. Burial was at the Eagle Butte Cemetery under the direction of Kesling Funeral Home of Mobridge. Visitation started at 6 PM with a prayer service at 7 PM Thursday at St. John’s Episcopal Church in Eagle Butte. Joan passed away Saturday, March 7, 2020, at the Avera St. Mary’s Hospital in Pierre.

Gloria Joan (Hunt) Webb was born on June 13, 1934, at the Old Cheyenne Agency to Jack and Jennie (Annis) Hunt. She was the third oldest of eleven children. Her dad never liked any of his children’s name so he called her Jo. The kids in school always called her Hunts a Bear! She grew up on the family ranch southwest of Eagle Butte. It was four miles to the country school Joan and her siblings attended. They rode horseback to get there and back. After country school she went to high school in Eagle Butte and graduated in 1952. Following high school, she attended summer college in Spearfish and received her teacher’s certificate. She began teaching in Gillette, WY, at a country school. She spent two years there before returning home.

On March 5, 1955, Joan married Martin “Honey” Webb in Pierre, SD.  Following their marriage, they partnered with Joan’s dad, Jack Hunt, on some sheep and began their married life. That summer they trailed those sheep nearly one hundred miles ending up north of Isabel, SD, where they summered, moving each time with the sheep to new grazing.  In 1957, they ventured out to Armstrong County where they were one of the first people to establish a ranch in that area.  With just 3 cows and a few sheep they began years of successful ranching. Joan ran the ranch side by side with Honey all those years. In 2009, Joan had heart surgery and she began to spend time between the ranch and Eagle Butte. While in Eagle Butte she was able to spend a lot of time with her lifelong friend, Faye Longbrake. They enjoyed going to rodeos, family gatherings, Dupree for lunch and going to sunrise services for Easter each year in Dupree.

There always seemed to be a few “extra” kids around the ranch, something both she and Honey enjoyed. She enjoyed traveling, going to rodeos or any other activities to support her children and grandchildren plus any other friends or family members. Joan loved fishing and taking the grandkids to spend the day at the river swimming, playing in the mud and making mud potatoes. Over the years Joan enjoyed knitting, making many sweaters for family and friends. These were not just regular sweaters; they were the most beautiful custom western cardigans you ever seen. Her grandmother, Molly Rivers, taught her to do beadwork and how to make star quilts. She did a lot of sewing throughout her life but she enjoyed making the star quilts for family and friends the most. She was working on one the day she passed away. She loved making jelly for her family and friends and was planning on returning to do just that. She also enjoyed watching old westerns and Molly B. Polka. She was proud of her yard and garden and had quite a collection of clowns and pretty dishes.

She is preceded in death by her parents, husband, Honey, sister, Lurene Rabern, and nephew, Charlie Lake.