Students and families from Dupree bridged the gap from here to Europe when they recently hosted German exchange students and three of their teachers for nine days. The visiting students arrived in Rapid City the first week of October where they were greeted by Dupree students. The group then spent three days in the Black Hills doing many touristy things such as visiting Mount Rushmore, Crazy Horse Monument, Cosmos, Badlands and Wall Drug.

After arriving to Dupree on October 7, the students enjoyed a potluck dinner after which, similar to the orphan trains of the old west, each host family took one or two exchange students home with them.

Just how did this exciting program come to fruition? It all started last winter, when Marion Blue Arm began working with a friend of hers from Germany to arrange for ten German students to come to America and stay with Dupree families, with plans for ten DHS students to go to Germany in May 2020. This first visit was the first phase of their plan.

The visiting students attended school for a couple days before the blizzard hit last week, and among the many new American customs they were introduced to, they got to experience snow days. Like their American friends, they felt the thrill of the call that school was canceled, and took advantage of getting to hang out with their new families.

When they weren’t snowed in, they got to rest, try new foods, help with farm chores,  watch movies, bake cookies, play hours of board games, have bonfires, attend church with their families, listen to Lakota history from local elders, and some got to go out of town and see things like the State Capitol and Cultural Heritage Museum. There were some firsts as well, when some students got the chance to eat smores and carve pumpkins for the first time.

The students also enjoyed the snowfall with snowball fights, experienced the thrill of driving on icy roads, wore winter clothing supplied by others, rode snowmobiles, and got to eat a blizzard from Dairy Queen during an actual blizzard.

In addition, the hours spent with their host families meant that they had a lot more time to answer questions about their home country and compare their homeland with ours. In their home country, the German students, ranging from 14-16 years old and in the tenth grade, all attend private school. In May, they will be making major life choices because that is when they decide to either continue on with two more years of high school before moving on to university, or they can choose to begin a three-year apprentice program to be trained in a trade. This educational system has resulted in Germans having virtually no dropout issue because many students opt to do the apprentice program if they are not into school.

When asked how DHS compares to their schools, the students said they were surprised by how much technology DHS students have and just how big Dupree School is. Their classrooms are more crowded, they said. Classwork was similar and most kept up, not surprising because they start taking English as a weekly class in kindergarten. One difference for the students was having the same class schedule five days a week — most said they preferred a varied schedule. Some of the German students who went to the NWAS CTE Graphic Design class said they really enjoyed it and would like to see something like that at their school.

Education aside, while they missed some school experiences and going to a football game as a result of the snow days, when they were asked what they liked about America/Dupree, a few comments included:

“The American food, even the bread, was sweeter, and the girls are sweeter too.”

“Your WIFI is so much faster!”

“Everyone here is so happy and funny. Many Germans are not very nice and are so serious.”

As for comparisons of things that are different from Germany, the first answers dealt with food portions and the types of breakfasts. The food portions in America are much bigger, and a typical German breakfast primarily consists of bread and jams, while breakfast here consists of many types of food choices.

Also, they said they enjoyed pretty much all the food that they tried during their stay. A couple of the students tried new flavor combinations such as dipping pizza in ranch, dipping French fries in ice cream, and eating baked pumpkin seeds. As great as their food experiences were, one thing that wasn’t as good here was the chocolate. As one student put it, “The chocolate is much better in Germany.”

When asked if any had eaten American kuchen to compare to German kuchen, they were puzzled. Apparently, the word kuchen means cake and not the dessert that we eat in our state. When the dried fruit custard kuchen pie was described to them, they knew what it was, but they used a different word for it. None of the students had tried the American version during their stay.

Differences in political systems were shared from the students who said that Germany has 42 political parties with six bigger and stronger parties than the rest. There are also no term limits for president and a politician can lead indefinitely if they are re-elected every five years. Their current president has been in office for 14 years.

Overall, the students said they felt very welcomed by their Dupree host families and the community, and said they had an excellent adventure during their visit. They also said they look forward to hosting Dupree students next year, and a couple of them mentioned that one day they hope to return to South Dakota to visit their host families again. Bonds and friendships were created through this exchange program. 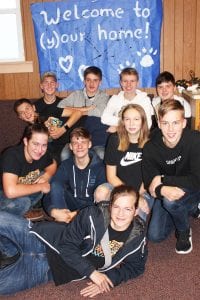 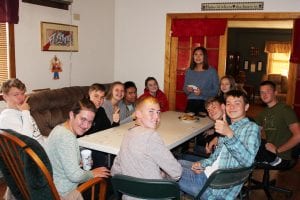 EAGLE PHOTO BY PATTY PEACOCK A handful of visiting students from Germany and Dupree students enjoy snow day with board games at the Peacock home. Left to right starting with those seated on the couch: Luca, Malory Peacock, Khalius In The Woods, Chessa McDaniel, Valerie Janis, Lilly, Maxwell Peacock, Paul, Clifton Birkeland, Sacha, Jannis, and Louis.