The 81st Annual Dupree Fireman’s Ball, which was held on Saturday, October 26, and was a success, attracting partygoers from as far away as Pierre.

Three divisions were held for costumed attendees, which with their own flair and creativity. The results for the costume contests are below:

0-6 year old division winners: Braxton Big Eagle as “Mario” for Most Humorous, Carver Vrooman, as the “Grinch”, won Scariest/Ugliest, CJ Farlee as a “lumberjack” won Most Original, and Most Adorable went to Lacie Ler for her Minnie Mouse costume.

Adult division winners: For those 13 years and older, the winning costumes for Scariest/Ugliest went to Katelyn Hump, Kristen Stambach, and Kayla Spiel who dressed as the “Hocus Pocus” Sanderson sister witch trio, Scott Sugar won Most Original as “Fat Thor”, and Most Humorous went to Jaci Etzkorn’s version of Mrs. Doubtfire’s moment when she had a ‘hot flash’. 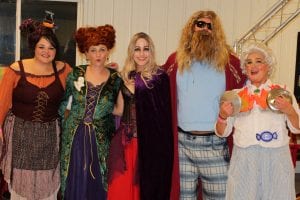 EAGLE PHOTO BY PATTY PEACOCK Hollywood blockbuster films was a common theme during Saturday night’s masquerade ball at the Firemen’s Hall in Dupree. Attending the star-studded event were the Sanderson Sisters who put a spell on party goers, while the God of Thunder showed up to the event in potato couch-casual attire, and lastly, Mrs. Doubtfire relived her iconic “hot flash” moment when she attempted to cook a dish to bring to the party. 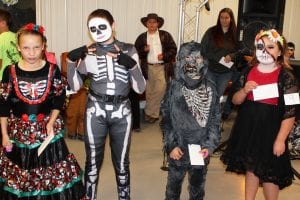 EAGLE PHOTO BY PATTY PEACOCK Taking home cash in the 7-12 costume division were (left to right): Taralynn Rudloff winning “Most Adorable”, Michael Donovan’s skeleton and his dancing in the outfit won “Most Humorous”, Dayton Stambach took home “Scariest/Ugliest” and “Most Original” went to Aliaunna White Wolf with her face paint and outfit. 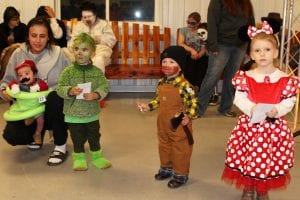 EAGLE PHOTO BY PATTY PEACOCK The costumes winning prizes in the 0-6 years old division were: Braxton Big Eagle as Mario won the “Most Humorous” with his mom, Makenzie Dupree, “Scariest/Ugliest” went to Carver Vrooman as the Grinch, CJ Farlee as a lumberjack who won “Most Original” and “Most Adorable” went to Lacie Ler in her Minnie Mouse costume. 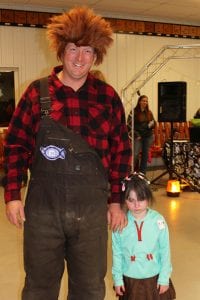 EAGLE PHOTO BY PATTY PEACOCK Boyd Stambach and his daughter as Wreck It Ralph and Vanellope.