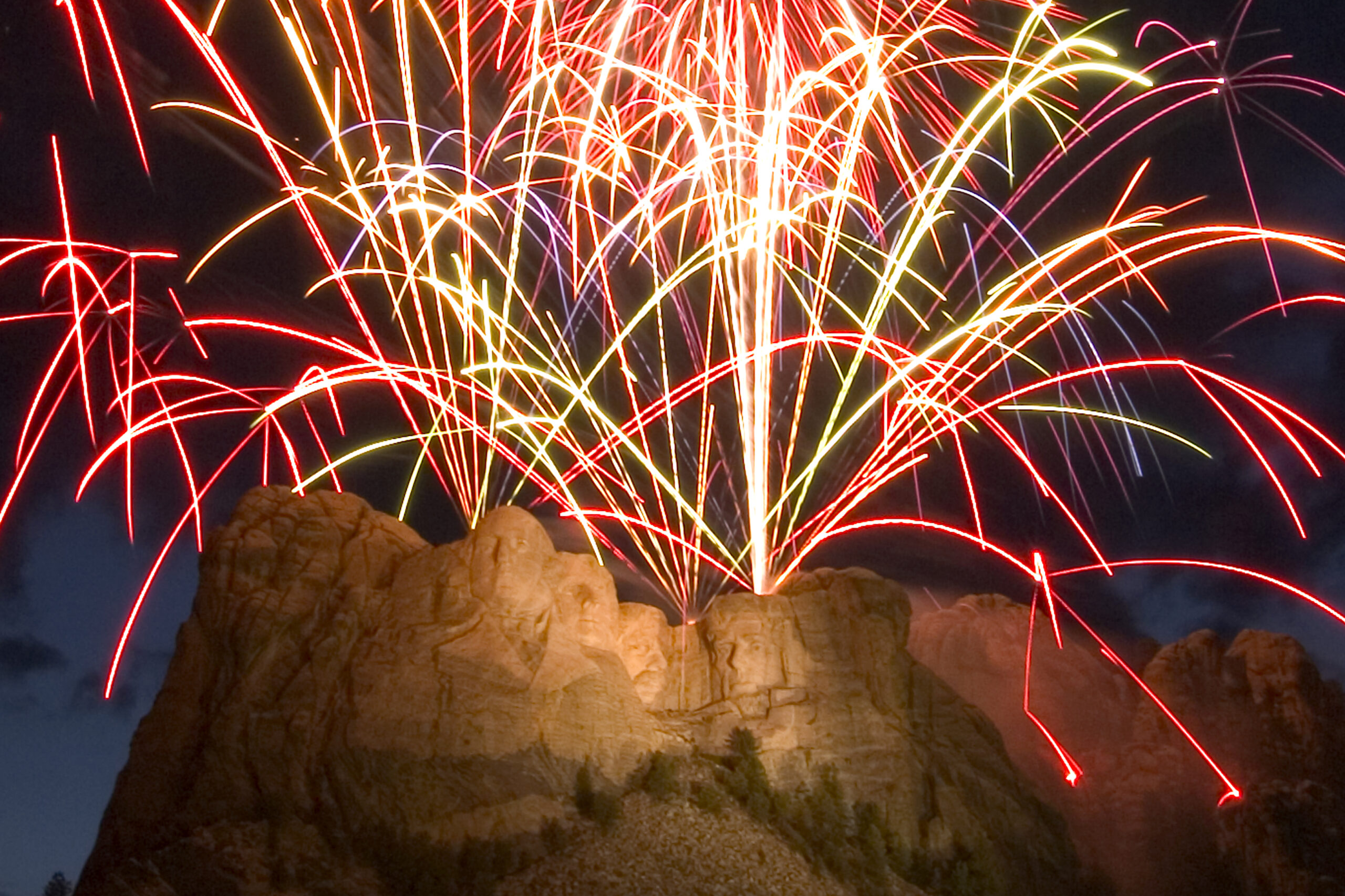 Rushmore fireworks show images
The state has taken safety measures to try to ensure the fireworks at Mount Rushmore on July 3 can be held without incident. Photo: South Dakota Department of Tourism

(Editor’s note: Just one week before President Trump’s visit, a wildfire (Mine Draw Fire) began on June 24, six miles south of Mount Rushmore. The State estimated the fire to be approximately 60 acres and 25% contained as of June 25. The cause remains under investigation.)

Abnormally dry conditions and a persistent risk of summer wildfires in the Black Hills of South Dakota make the fireworks display planned for July 3 at the Mount Rushmore National Memorial an unnecessary, potentially devastating and expensive event, according to one fire expert with intimate knowledge of the region.

Bill Gabbert, former fire management officer for Mount Rushmore and six other national parks in the region, said the controversial fireworks show that could attract 7,500 people, possibly including President Donald Trump, would be “ill advised” even when conditions are not as dry as they are now.

In April and May of 2020, the Black Hills fell 30% to 50% short of moisture compared to the long-term precipitation average for the region. Long range forecasts for June indicate that hotter and drier-than-average conditions will continue until July. On June 4, the U.S. Drought Monitor labeled nearly all of southwestern South Dakota, including most of the Black Hills, as “abnormally dry.”

“The critical thing is, this is the time of the year when we get most of our rain. And so when we’re starting to see precipitation deficits during the time period when we get all the rain, it does become quite concerning looking forward to our fire season,” Clabo said.

The Black Hills and the area around the monument are dominated by fire-prone ponderosa pine forests, according to the U.S. Forest Service. Homes and businesses in and around the town of Keystone, about three miles northeast of Mount Rushmore, have a 95% greater risk from wildfire than communities in all other parts of South Dakota, according to the forest service “Wildfire and Risk to Communities” mapping tool.

The South Dakota legislature recognized the serious threat to life and property decades ago when it passed a law banning fireworks sales and use within the Black Hills Forest Fire Protection District.

The National Park Service, which manages the memorial, has determined that launching fireworks at Mount Rushmore would pose only a slight fire risk. In an environmental assessment conducted as part of the 2020 fireworks planning process, NPS staff estimated that, under normal conditions, there was a .02% chance of a 15- to 30-minute display igniting a wildfire that could threaten nearby homes, businesses or campgrounds.

However, the assessment said the risk of sparking a major fire would rise if the region were to be abnormally dry. Meanwhile, the chance of sparking a smaller fire that only affects the forest within the memorial was estimated at 60% if conditions were normal. 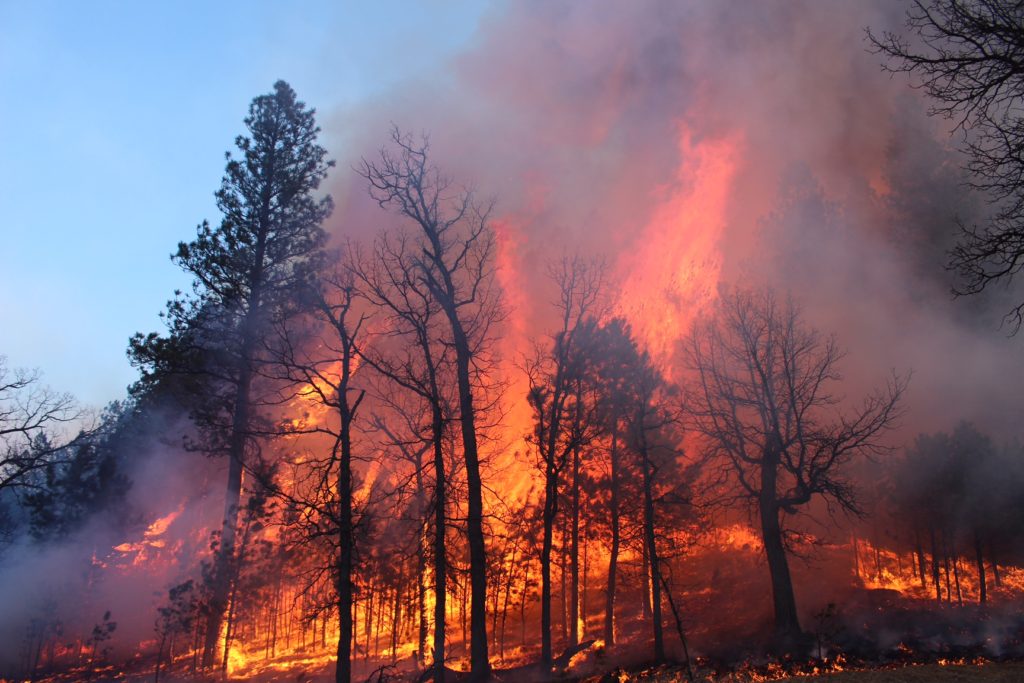 Legion Lake Fire image
The Legion Lake Fire in December 2017 ignited from a downed power line and was discovered within 10 minutes of ignition but could not be contained for five days. The fire about 20 miles southeast of Mount Rushmore burned more than 54,000 acres. Photo: South Dakota Wildland Fire

The Black Hills have been home to several major fires over the years, the most recent coming in December 2017 when the Legion Lake Fire about 20 miles southeast of Mount Rushmore burned more than 54,000 acres over five days and required 350 personnel and $2.5 million in costs to extinguish. That fire started from a downed power line and was discovered within 10 minutes of ignition.

Gov. Kristi Noem’s communications director Ian Fury said the park service has taken several precautions, including performing an environmental assessment, conducting a large controlled burn within the memorial’s borders in April and creating a safety “Go/ No-Go” checklist to determine whether to continue the event as planned.

“The Go/No-Go checklist for the event was developed in collaboration with several state, local, and federal agencies. This checklist is based primarily on forecasted and current weather and fuels conditions that are used to predict fire behavior as well as the availability of fire suppression resources,” Fury said in an emailed statement.

A 2016 U.S. Geological Survey found that several chemicals in fireworks, most prominently perchlorate, had leached into Mouth Rushmore’s groundwater. Perchlorate, when ingested at high levels, has been known to affect human thyroid function, the environmental assessment said.

State officials have said that COVID-19 safety measures recommended by the federal Centers for Disease Control and Prevention — such as limiting large gatherings, requiring people to be six feet apart and the wearing of masks — will not be required of attendees at the Rushmore show.

Mount Rushmore firework displays present firefighters with unique challenges, Gabbert said. The terrain is steep and broken and firefighters can’t move in to put out smoldering debris until the display is finished, meaning they must hike around in the dark looking for fires in broken terrain.

Of the 21 fires Mount Rushmore fireworks displays have set off in the past, none got out of control.

After 2009, though, the risk of wildfire became too high and the park service stopped hosting fireworks. At the time, a mountain pine beetle infestation in the Black Hills killed thousands of trees and created significant dry fuels. The beetle infestation was declared over in 2016 and almost immediately leaders in the tourism industry began calling for a return of the Mount Rushmore fireworks. In May 2019, the National Park Service, at the urging of President Trump, began working with Noem and the state tourism department to bring the event back.

On May 1, 2020, President Trump said in an interview with a conservative podcast host that he planned to attend the event.

The state of South Dakota, which is paying a majority of the event costs, has contracted with the California-based company Pyro Spectaculars for the fireworks. The display is expected to last 18 minutes and cost $350,000.