Fair softball tournament knows “it” out of the park

This year’s fair softball tournaments ran smoothly, thanks to the cooperation and understanding of the teams who participated, the use of ASA certified umps from Pierre, and the organizers’ adherence to the policies they promised.

Organizers Kim Claymore-Knight and Bernita In the Woods shared methods in the approach. Games started on time, and the women stuck to the same time limit for the women’s games that the Pierre league hosts to keep the schedule from stretching into the night on a field with no lights.

In the Men’s games, players were able to buy home runs for $10 for each over-the-fence slam, and with the money earned, Claymore-Knight was able to offer two sportsmanship awards to the tournament honors.

One aspect of the game that has had some long-time local players worried is that there are not as much local interest in playing softball as their once was from younger generations, but Claymore-Knight said this year showed some hope for the future of local teams.

“It was very memorable that our local team of young players, Wild Mnicoujous, played well and beat some of the legends of the game. This team was dedicated to playing in our local league all summer, including clearing the water holes with buckets emptying the water outside the field so they could play even after all the rain,” Claymore-Knight said.

The local league was held Mondays and Thursdays and the younger players learned a lot, prepping them for the tournament, she said. 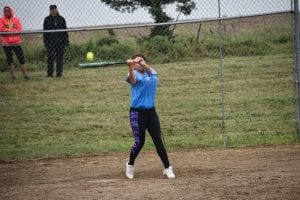 Responses to the tournament from players were positive, according to Claymore-Knight.

“The tournament is getting bigger with many of the teams/players saying they always look forward to this tournament and will definitely be back next year. We had two new teams come this year, and they said they would be back too. They really enjoyed themselves,” she said.

The champions of the men’s competition were the Roosters, and the Siderz took second, both teams based in  Rapid City. Third place for the men were the local Wild Mnicoujous.

Before the women’s championship, Claymore-Knight and In the Woods wished one another luck.

“We were warming up to play each other in championship so I called Bernita over to wish her luck. I also told her I hate playing against her, which you can tell by the look on my face. We also always say ‘love you’,” Claymore-Knight said of a photo captured of her and In the Woods meeting over one of the bases.

All-Tourney Awards and Individual Awards were unavailable at press time for the women’s games.