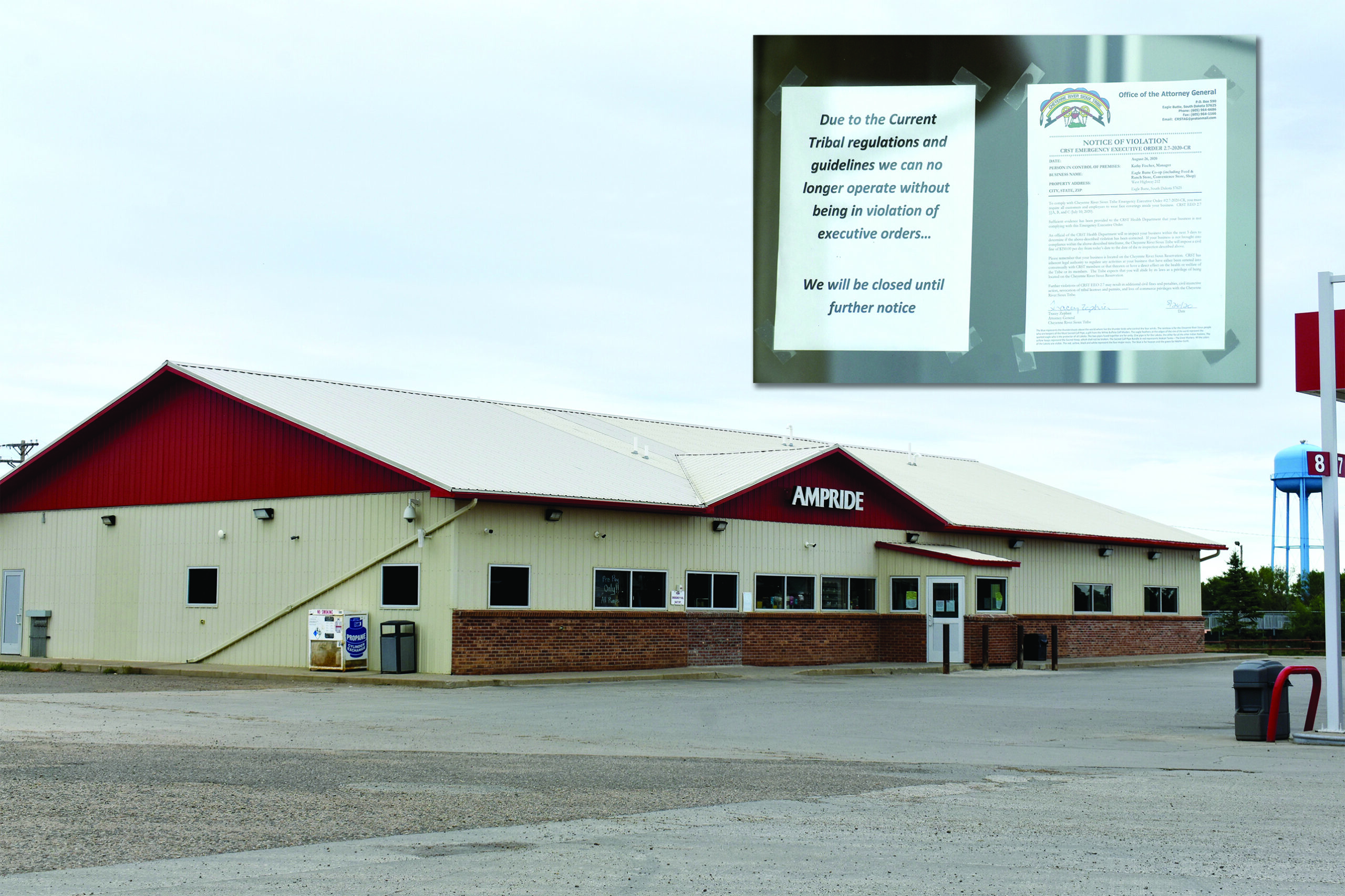 On Aug. 26, the CRST Office of Attorney General issued a Notice of Violation of Emergency Executive Order #2.7-2020-CR to several businesses on the Cheyenne River Sioux Reservation. The tribal executive order, known as the “face mask mandate” was passed by the Tribe on July 10 and a copy of the order was delivered to each business.

(Editor’s note: On Tuesday afternoon, the Eagle Butte Co-Op Association announced they would open the Ampride convenience story, and will open their auto shop and feed store at later dates.)

One such notice of violation was issued to the Eagle Butte Co-Op Association, which comprises of the Feed and Ranch Store, convenience store, and auto shop in Eagle Butte.

“To comply with Cheyenne River Sioux Tribe Emergency Executive Order #2.7-2020-CR, you must require all customers and employees to wear face coverings inside your business,” stated the notice.

The executive order was passed as preventative measure to help stem the spread of COVID-19 on the reservation.

“No business within the Cheyenne River Sioux Reservation may operate unless its employees wear a face covering and gloves at all times while working,” stated the order; however, this did not not apply when an employee is working alone in the building or when the job involves no in-person (customer or co-worker) interaction in the building.

Since issuing the order, the Tribe has been providing face masks and gloves to any business that requested supplies, free of charge, according to CRST Chairman Harold Frazier.

The notice given to the Co-Op on Aug. 26 stated that “sufficient evidence” was “provided to the CRST Health Department that your business is not complying with this Emergency Executive Order.”

The co-op was notified that a tribal health department official would re-inspect the business within three days of issuance “to determine if the above-describe violation has been corrected” and that failure to comply would result in a fine of $250 per day from Aug. 26 to the date of re-inspection.

“Please remember that your business is located on the Cheyenne River Sioux Reservation. CRST has inherent legal authority to regulate any activities at your business that have either been entered into consensually with CRST members or that threaten or have a direct effect on the health or welfare of the Tribe or its members. The Tribe expects that you will abide by its laws as a privilege of being located on the Cheyenne River Sioux Reservation,” stated the notice.

On Aug. 27, the Eagle Butte Co-op Association posted a photo response on their social media which read, “Due to the Current Tribal regulations and guidelines we can no longer operate without being in violation of executive orders… we will be closed until further notice.”

During his daily address on Aug. 30, CRST Chairman Harold Frazier stated that the Tribe did not close down the co-op, and that the Tribe informed them that they were out of compliance and what was needed to fix that. The organization decided to close on their own, explained the chairman.

Messages left with the co-op were not returned by press time.