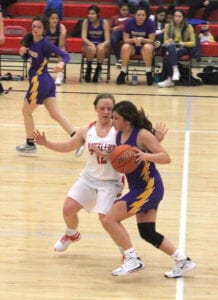 PHOTO BY WARREN LEBEAU Dupree’s Daci Lends His Horse brings the ball down the court against a Lady Battler defender. 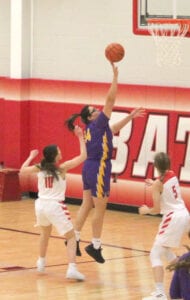 PHOTO BY WARREN LEBEAU Jay’ellen Red Fox goes up for a jumper to score two points for the Lady Tigers.

The Lady Tigers took their 3-3 record across the Big Mo Thursday night, January 7th, to take on the Lady Battlers of Potter County. With the Battlers having won their last game and playing in the Gettysburg High School gymnasium, the Tigers knew they would have their hands full with this 2-4 team.

Coach Clint Holmes had his team focused and with the Tigers’ two-prong sophomore attack of Daci Lends His Horse and Chloe Dupree, they started off hot – Red Hot. These two electrifying players commenced their carnage immediately by both scoring 7 points apiece in the first quarter. Whereas, Lends His Horse was flying down the court to score, Dupree was cleaning up inside. But Dupree also quickly proved that she was just not an inside player because she bombed in a 3-pointer to-boot. With Taylee Jewett and Jay’Ellen Red Fox adding baskets as well, the Dupree Tigers closed out the first quarter with 18 points.

Whereas the Tigers were hot and flying around, the Battlers plodded along. Potter County guards, Haylie Ahlemeier and Kirstie Lake, worked hard to get buckets, but it was their point guard, Ashlee Kaup, who looked like the Energizer Bunny because through all her attempts to do whatever it took to score, she finally managed to drain a shot from the floor and get two more points from the line due to her hustle. Thus, the Battlers played a more methodical and slower type of game, which was good enough for them to earn 8 points when the first period expired.

The first quarter of play clearly indicated that the key to victory for both teams was in the hands of their sophomore point guards – Daci Lends His Horse for the Tigers and Ashlee Kaup for the Battlers. These two young athletes knew it as well because they locked up for battle from the very tip-off. Besides being the same height, they have the same speed, finesse, and shooting ability; which made for a great show between these two fierce competitors throughout the entire game.

In the second quarter, the Battlers’ defense tightened up and they held the Tigers to only 8 points in this frame. Whereas Potter County did tally 11 points in this second frame, it was Taylee Jewett’s and Lynda Charger’s turn to step up to keep the Battlers from totally taking over. Taylee added 4 points and Lynda dropped in a basket too, as Daci contributed a bucket herself. It wasn’t as substantial of an offensive barrage as they did in the first quarter, but still more than enough to end the first half in favor of the Tigers – 26 to 19.

In the third quarter, Daci Lends His Horse and Ashlee Kaup basically nullified each other but Daci did add to her overall score by making 2 free-throws; whereas Kaup, try as she might, just could not get the ball through the hoop. Overall, the Battlers did outscore the Tigers again 11 to 8 in this quarter but doing her best to keep Potter County at bay was Chloe Dupree, who scored 5 points, with 3 coming from one shot behind the arch. Also, helping out was Shawnee Lawrence who got a point from the free-throw stripe to make the score 34 to 30 when the horn blew to end the third period.

The fourth quarter started off like the baskets on both ends of the court were as shrunken as the baskets at any two-bit carny booth set up to steal your money. Neither team could make a basket and it was more like a tennis match where one just watches the ball go back and forth without anybody scoring a point. Both teams threw up a multitude of shots, but nothing dropped. It seemed like the scoreboard stayed at 34 to 30 forever. When Kashlin Bettelyoun, Jay’Ellen Red Fox, and Chloe Dupree finally dropped shots in it looked like the Tigers secured the win. But suddenly Ashlee Kaup for Potter County sank a long 3-pointer, which sparked a surge for the Battlers. Teammate Kirstie Lake followed suit and banged in a 3-pointer and Tyler Simon added a point too. With a very serious threat being levied it finally looked like the Lady Battlers might do it – make a comeback. When Ashlee Kaup hit another big straight away 3-point shot to get the score to 40 to 42 with seconds left to play the gym was rocking as if it was a So-Dak 16 playoff game. But when Chloe Dupree finally secured a loose ball that could have tied the match and tore down court to make a basket with 3.3 seconds left to play it put an end to Potter County’s threat. That layup not only got the win for the Tigers, but it completely took the air out of the gym for anyone cheering on the Battlers. When the final buzzer went off it was 44 to 40 in favor of girls wearing purple and gold.

If there was a Player of the Game, it would have had to gone to Chloe Dupree. Chloe not only stopped the surge from the Battlers but was high scorer of the game with 16.