The cast of “Orientation” came in third in the regional one-act play competition held in Timber Lake on January 20 behind Faulkton School in first place and Newell in second. They were directed by Patty and Mark Peacock. The top two plays go on to compete at the state level which this year will be held at SDSU in Brookings during the first weekend in February. Dupree is the alternate. 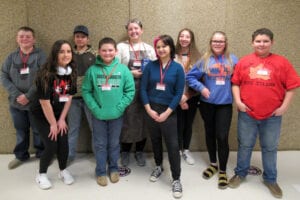 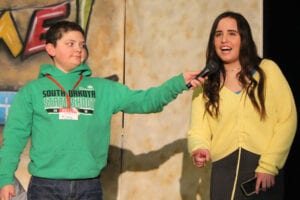 PHOTO BY PATTY PEACOCK Maverick Lemke plays young podcaster Riley who is trying to get Hellen, a homesick Rhode Islander played by Shayna Farlee, to share personal information with him for his podcast. 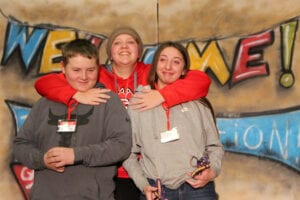 PHOTO BY PATTY PEACOCK Malory Peacock hugs Baxter Schrempp and Zoey DeLaRosa who play RAs trying to match up “the right weirdo with the right weirdo” to be good roommates in college. Malory plays “no boundaries” character Sofia who is constantly touching people. 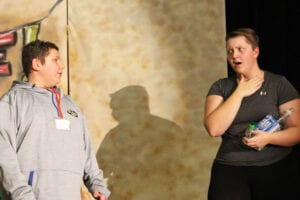 PHOTO BY PATTY PEACOCK Malory Peacock as extreme germaphobe Brianne who is appalled that outgoing Dan from Alaska, played by Wyatt Lemke, is so excited to be at college that he doesn’t want to miss a single thing. Dan doesn’t even plan to shower some weekends because that could be time lost from fun!