Door-to-door Census to end a month earlier than planned 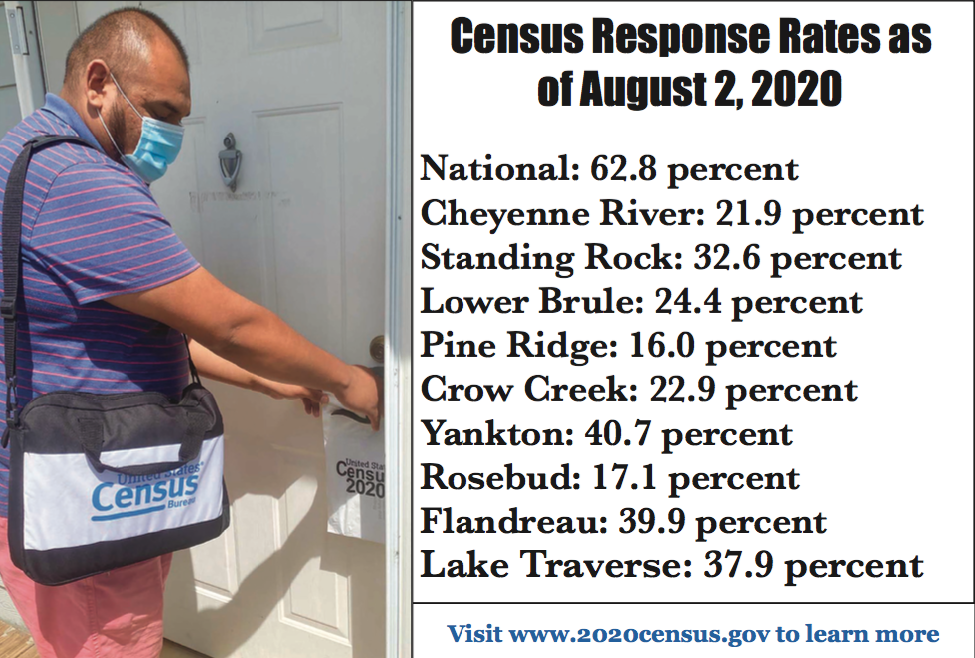 PHOTO FROM THE CENSUS BUREAU
Census workers were originally scheduled to conduct door-knocking operations until Oct. 31, but under the Census Bureau announced this week that it would cut short its nationwide count by a full month. 40 percent of households nationwide have not yet completed the Census.

Door-knocking census activities will end an entire month earlier than planned on Cheyenne River and across the nation as a result of pressure from President Trump.

In April, the Census Bureau announced it would extend the self-response deadline to Oct. 31 as a result of COVID-19. In person visits to non-responding households were originally planned from May-July, 2020. These door-to-door activities were also extended to Oct. 31. That deadline abruptly changed last week.

Door-to-door census activities are specifically designed to get the maximum count of people in extremely rural areas, those who would not otherwise respond, and indigenous or minority communities. All of these apply to Cheyenne River.

In places like Cheyenne River most census collection is done door-to-door. This move will have significant impact on tribal funding for the next decade. The results stretch into the lifetimes of today’s children. The census influences education, healthcare, housing, transportation, economic development, access to grant dollars, legislative power, land and water rights, and self-determination.

“That’s really going to have a bad impact on us. It’s going to hurt us more than anything. I just want to encourage everybody, when you get the forms to fill them out and send them back in, because this will impact us for the next ten years,” said CRST Chairman Harold Frazier.

“I know the way they throw numbers around has never been in favor of the large tribes, particularly large land-based tribes. I haven’t had a chance to talk to any of the other chairman in our area about how they’re doing it, how things are going on their reservations. I was looking at some numbers and it really looked like us, Pine Ridge and Rosebud have had very low responses,” Frazier said.

“It’s very important that Cheyenne River really gets on your computer, or call somebody and finish it. There’s three different ways of completing the census this year. We just got to be able to encourage more people to respond,” Eagle Staff said.

In an email to her team on July 31, Vicki McIntire, Deputy Regional Director for the Denver/Dallas Regional Census Center confirmed the team counting on Cheyenne River would end its work early. She reiterated the mission to “count everyone that resides in the U.S., once, only once and in the right place.”

McIntire said going door-to-door can start on Cheyenne River earlier than Aug. 11 as originally planned. Residents should be on the lookout for Census enumerators. All enumerators will have PPE and responding to the census is no-contact.

The Importance of Self-Response

Census workers will leave information at each house so residents can self-respond online or by phone. Given the shortened timeline for door-to-door data collection, self-response is even more important. Packets will have a census ID for each household. This ID can be used online or on the phone. There are only nine questions and it takes about 10 minutes to complete.

The Census Bureau has a mandate in Article 1, Section 2 of the Constitution to count every person in the United States every ten years. Each person in the country is legally required to respond. The census does not exclude anyone based on citizenship, immigration status, or homelessness. Some hesitate to respond for reasons of mistrust, lack of access to technology, fear about immigration status, or large households. Going door-to-door fills in these gaps. Workers take an oath and census data is never shared so no one can be penalized for their answer.