The Dupree Athletic Boosters sponsored the second annual DHS Athletic Banquet and Awards Ceremony on Monday, April 29.  The evening is set aside to honor and recognize the Varsity and Junior Varsity athletes in each program.  Junior High students that played either JV or Varsity were welcome to attend.  However, JH athletes will be honored at the Activities Award Night that will be held on Thursday, May 9 at 7 pm at DHS.

The Dupree Boosters furnished a prime rib meal with the sides and the TRIO organization furnished cake for dessert.  After enjoying their meal, the awards ceremony was held and Kim McDaniel, Dupree Athletic Boosters Club president, was the emcee for the evening and then each coach presented their own awards.

Mrs. Deal presented cross country (XC) awards and did their parents night during the ceremony.  At the end of the evening, the recipients of the Dupree Athletic Booster Club Scholarships were announced and they were CL Pederson and Tayla Thorstenson. 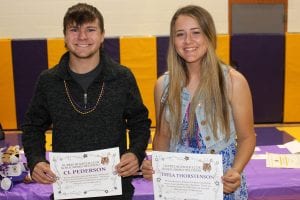 CL Pederson and Tayla Thorstenson each receive a $500 scholarship from the Dupree Athletic Booster Club. Photos by Patty Peacock 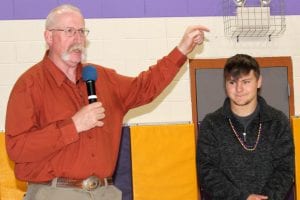 Powerlifting Coach Shannon Hinrichs talks about CL Pederson’s accomplishments this year- it was the first year Pederson joined and he won the state champion in his weight class. He also qualified for a national tournament, but the state and national tourney were held just days days apart, Pederson participated in state; however, the amount he lifted would have earned him a national title. 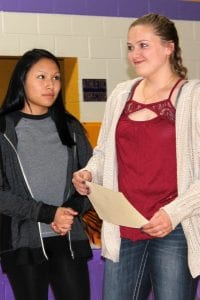 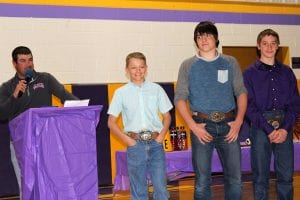 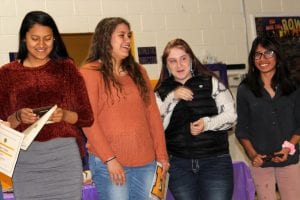