There has been a great deal of activity in the Howes area lately, which has caught the attention of many area residents who have voiced concerns over the possibility that Keystone XL pipeline-related activities may be occurring.

At Howes Lake, a water pump was stationed near the highway with water lines feeding into the lake and running along Highway 34 for about half a mile before the pipe maneuvered north into fenced land.

South Dakota Department of Environment and Natural Resources Environmental Scientist Manager Brian J. Walsh said that a Temporary Permit to Use Public Waters was issued on September 24, 2019 to Knife River – Yellowstone Division for county road construction activities on a 4.7 mile section of Four Corners Road. The permit expired on October 31, 2019.

According to another DENR official, it is cost-efficient and normal procedure for companies to use water from lakes for road construction.

As of Monday, November 4, the water pump was not present and there was no road construction activity in the area.

In a separate region just a few miles north of the Howes intersection, there is a drilling rig which has been positioned at different areas near Highway 73.

“DENR is not aware of drilling activities north of Howes. However, it could be for a domestic well which would not require a permit from DENR. Well drillers are required to submit a well-completion report to DENR once a well is completed,” said Walsh.

In a separate interview, a DENR official said he did not think the road construction and the drilling were related.

Lastly, Walsh confirmed that “Wink Cattle Company has an application pending to use their existing, permitted well as a back-up water source for a number of workforce camps associated with the construction of the proposed TransCanada Keystone XL pipeline.”

A Water Management Board meeting was held on October 29 in Pierre during which arguments were presented from Dakota Rural Action, Great Plains Tribal Water Alliance, the Yankton Sioux Tribe and Elizabeth Lone Eagle opposing the application. There is no updated info on the DENR website about future proceedings regarding this case.

Documents related to Wink’s application can be viewed at denr.sd.gov/contested.aspx. 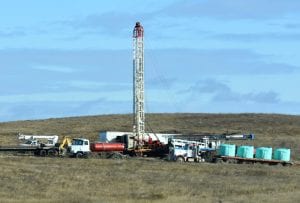 EAGLE PHOTO BY ALAINA BEAUTIFUL BALD EAGLE Above: Drilling activity has been occurring near Howes intersection for the past few weeks, and was observed on Monday, November 4. An official from the South Dakota Department of Environment and Natural Resources said they were unaware of drilling in the area; however, if the drilling is for domestic use of water, a permit is not required through the DENR.