Deb Haaland, first Native American to be nominated as Sect’y of the Interior

Deb Haaland has been nominated by President-Elect Joe Biden to serve as the first Native American Secretary of the Interior, the department which also oversees the Bureau of Indian Affairs. In the role, she will oversee the Department’s responsibility for over 500 million acres of public lands which include national parks, oil and gas drilling sites and endangered species habitat. 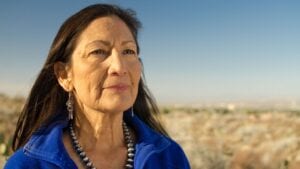 In her acceptance speech for the nomination, Haaland was visibly moved. She said decisions at the Department of the Interior are not simply about conservation, that they are woven in with justice, good jobs, and closing the racial, wealth and health gaps. “I will be fierce for all of us, for our planet and all of our protected land.”

She began her comments with a land acknowledgement to the ancestral lands of the Lenape tribal nation. She said, “The president-elect and vice president-elect are committed to a diverse cabinet and I’m honored and humbled to accept their nomination.”

She continued, “This moment is profound when we consider that a former Secretary of the Interior once proclaimed his goal to, quote, civilize us or exterminate us. I’m the living testament to the failure of that horrific ideology. I also stand on the shoulders of my ancestors and all the people who have sacrificed so that I can be here.”

She spoke of the need to respect the earth and value its resources. “I carry those values with me everywhere.” She continued, “We will ensure that the decisions made at Interior will once again be driven by science. We know that climate change can only be solved with participation from every department and of every community. Coming together in a common purpose, this country can and will tackle this challenge.”

Haaland has connections on Cheyenne River as well. She and Marcella LeBeau met at the Native American Presidential Forum in January, 2020, and in 2019 when LeBeau presented Haaland with an eagle feather plume and a Lakota name in honor of Haaland’s work on the Remove the Stain Act. 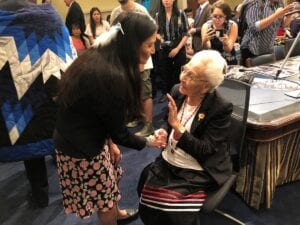 Representative Deb Haaland (D-NM) speaking with Marcella LeBeau of Eagle Butte at a meeting in Washington, DC in 2019 to promote the “Remove the Stain Act” to strip the Congressional Medal of Honor from members of the 7th Cavalry who participated in the Massacre at Wounded Knee. Photo Indianz.com

Says LeBeau of Haaland’s nomination, “That is so awesome! I just can’t imagine the honor that we are given to have her as a leader for the Native Americans. She knows all about us. She understands us and knows what we’ve been through. So she has an in already before she gets here. She has an understanding.”

LeBeau remembered, “I was given the honor and privilege of tying the eagle feather plume on her after the hearing.” Haaland was given a Lakota name at that time, Tȟakini Wichacinzin Wín/Defender of the Survivors. 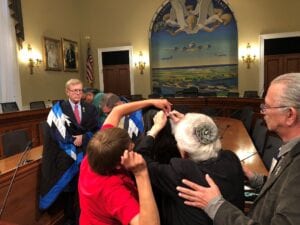 Manny Iron Hawk of Cheyenne River was also present at the hearing in 2019. He says her nomination is long in coming. “I think her nominations means that some of our land would be restored, meaning there would be no more drilling with our mother earth, like the way it should be. And a great healing will take place with our mother earth.” He remembered that Haaland participated at Standing Rock in 2016 and made food for people. 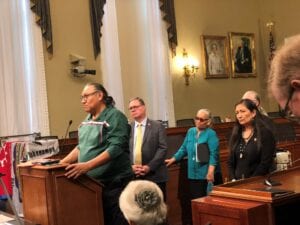 Manny Iron Hawk, a descendant of survivors of the 1890 Massacre at Wounded Knee, speaking with Rep. Haaland in Washington, DC in 2019 in favor of the “Remove the Stain” Act. Photo, Indianz.com.