Dances With Wolves: Stories and memories from local folks

With the 30th anniversary of the filming of Dances With Wolves, we asked local folks to share stories and memories that had about the production, which was a huge news around the area. Here are stories that were shared with us, with some good and not-so-good memories:

My late grandmother and her husband, Clarence and Loretta Runs After, acted in the movie Dances with Wolves, plus my grandmother’s son, Bobby Red Bear. I have one photo of them with Kevin Costner.  – Buffy Handboy

I was helping my dad drill a well and we stopped in Lantry, SD at the gas station to get a drink and a snack. We were muddy and tired. Kevin Costner was there. My dad said, “Sherry, this is a real life actor. Say hello.” He [Kevin Costner] wouldn’t shake my hand and was very rude. At 17, that left a big impression on me. Just because you’re famous doesn’t mean you’re a good person. Lesson learned, but I did like the movie. – Sherry Lou Higdon

My dad, Dave Bald Eagle, worked on set and constantly traveled to wherever they filmed for the movie. Because of his work with Kevin Costner, my dad was later hired to narrate the voiceovers at the Tatanka Museum in Deadwood, which Kevin built. – Remi Bald Eagle 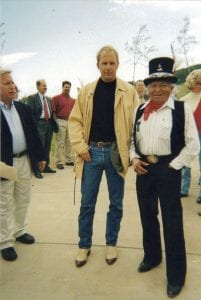