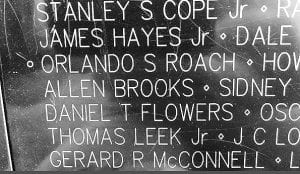 The Wall That Heals Vietnam memorial was on display in Chamberlain, SD from August 8 to August 13. The memorial, also known as the traveling wall, is a half-scale replica of the Vietnam Veterans Memorial that is located in Washington DC.

According to the Vietnam Veterans Memorial Fund website, The Wall That Heals “provides thousands of veterans who have been unable to cope with the prospect of facing The Wall to find the strength and courage to do so within their own communities, thus allowing the healing process to begin.”

Cheyenne River Sioux Tribal member Orlando Silas Roach is one of 58,000 men and women whose names are listed on the memorial.

Roach was a U.S. Army Specialist, assigned to 919th Engineering Company, 11th Armored Calvary Regiment. He was killed in action on October 27, 1966.

Roach is interred at the All Saints Catholic Cemetery in Eagle Butte. He was buried with full military honors and was posthumously awarded the Purple Heart.

The Wall That Heals will be on display in Billings, MT from August 17 to August 20. A mobile education center accompanies the memorial and provides information about service members who are listed on the memorial.