The Army Corps of Engineers has increased the flow from the dam to help decrease the back flow of water in the Cheyenne River.

It is now anticipated that the river will continue to rise due to melting snows upriver and continued local rainfall all along the Cheyenne River watershed.

Emergency crews are being dispatched to assist in Bridger and Cherry Creek communities. Sandbagging operations have begun in these communities. Crews assisted one family in evacuating their residence and are standing by to assist other families as calls come to the command center. Emergency Command Center is in operation and can be reached at 964-6559 or 964-6558 with any questions or calls for assistance. If there is a life-threatening emergency please call 911.

They are working quickly as possible to assess and assist, please avoid travel to these areas.

The Bureau of Indian Affairs Route 8 has been closed until further notice.

“For Emergency Safety reasons the following PSA is issued until further notice on BIA Route 8 everyone west of (Jeremy Means ) will have to exit to the west to Route 19 to highway 212 there is a culvert that is washed out and road caving west of Jeremy Means. Everyone including Jeremy Means to Route 8 east /north east will have to exit north to high 212 by swift bird day school. The Road will be closed at approximately 16.8 miles from highway 212 east on route 8. Please do not attempt to move road closed signs. Please call 964-6559 with any questions, thank you,” stated the Cheyenne River Sioux Tribe Emergency Command Center, which is responsible for emergency operations on the reservation.

While residents along BIA route 8 can still access routes to improved highways this road closure effectively divides the population as to which direction they can travel and adds additional mileage as well as drive time.

The road closure will disrupt school bus runs to the area adding additional vehicles and cost to local schools. This road closure will also add additional time for emergency service response to the remote areas serviced by the road. Response time and distance will increase dramatically all along the route due to the closure.

There are other roads on the reservation that should be considered for safety reasons but are the only routes that service those areas and are required to be open. 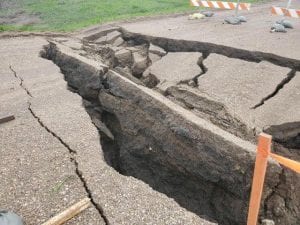 Erosion caused by snow and rainfall caused BIA Route 8 to collapse thereby causing the road to be closed until further notice. Submitted photo 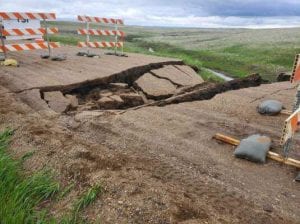 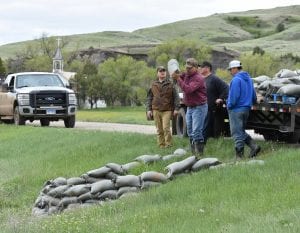 Crews from the CRST Game, Fish, and Parks unload sandbags in Cherry Creek. A culvert was dammed with sandbags to prevent spillage from the flooded Cheyenne River. Photo by Alaina Beautiful Bald Eagle 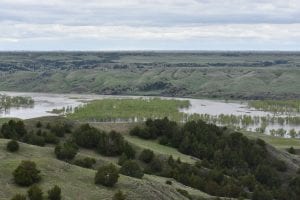 The Cheyenne River Valley is inundated with overflow after continuous heavy rainfall. Road conditions worsened across CRST and some homes were flooded and people were evacuated. Photo by Alaina Beautiful Bald Eagle 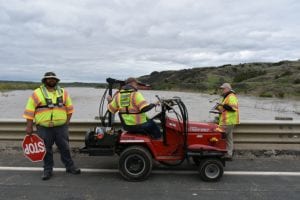