Cook of the Month: Evelyn Anderson 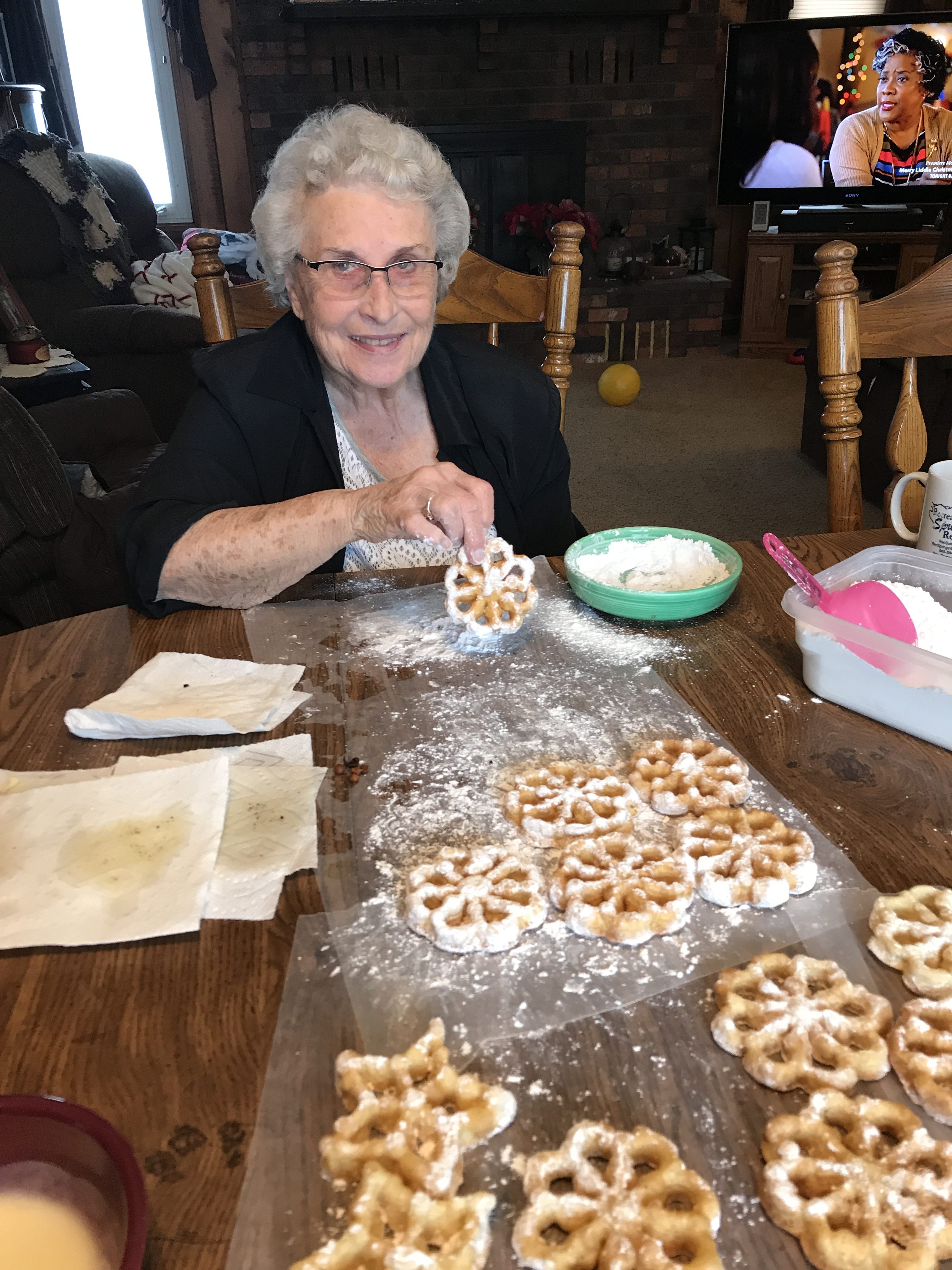 PHOTO SUBMITTD BY VICKI SHILLING
A scrumptious treat: Evelyn Anderson dusts her delicious rosette cookies with powdered sugar before serving them to her family and guests. The sweet treat was one of several recipes that Evelyn shared with us.

Talking with Evelyn Anderson is like speaking to an encyclopedia of 20th century American cooking. She loves to cook and bake and specializes in the kind of cooking that our mothers and grandmothers and most church ladies would recognize.

Evelyn Rae Thomas was born in 1936 in the Kramer Community Hospital in Dupree, South Dakota. She was last of eight children, a miracle baby born 10 years after her next oldest sibling. Her parents, George William Thomas and Josephine Anna Marie Thomas lived on a farm two and half miles east of Dupree where her father was also a blacksmith.

As a newborn, she was so small her siblings could fit her in a shoe box with the lid on it. To keep her warm, her mother and her older sister, who had come home to help with the baby, would set her on the open door of the cast iron cookstove in the kitchen. Wonderfully, her older sister is still living in Spearfish today and is 102 years old. She and Evelyn are the only two siblings left.

Since the older kids were grown and gone, Evelyn and her mother came to rely on each other around the farm. As a child Evelyn remembers learning how to fry eggs first, then hamburgers. It was when she started on pancakes that she began to realize she loved to cook and bake. She moved on to cookies and cakes, which was quite a challenge. When Evelyn was 13 years old her mother had a heart attack and Evelyn took over the housework, cooking and baking even more.

“Back in those times you didn’t waste any food and made things out of things you’d never guess,” Evelyn said.

She and her mother made the most of their root cellar since they did not have refrigeration. They kept cream, milk, potatoes and anything else they made in the cellar. Since they did a lot of butchering, she and her mother would also can pork and beef. Food would keep all winter long and in the summer they might have to get a 2 x 2 foot block of ice to cool the food in the cellar.

Evelyn says head cheese was incredibly delicious. Her mother would clean the whole head of a hog, hand grind the meat, cook the meat and pack it into the small cotton bags saved from sacks of sugar. The cheese would go in the cellar and when it was time to serve, the bag would be cut and the cheese served in slices, just like a little loaf of bread.

“It made such good sandwiches. They were delicious. It’s a lot of work but Mother was very, very particular in cleaning it up and putting in seasonings. There was hardly any fat. It was good nice tender meat. It was a delicacy that we didn’t have all the time,” she said.

The old cook stove was great for baking and griddling. Evelyn said they often fueled the stove with cow chips, which gave wonderful, even heat. The oven temperature was measured with a thermometer and fuel added to keep an even heat. The stove had a reservoir for hot water and open shelves for storage. They even used it to heat the old-fashioned flat irons to do the family ironing.

In 1950 when Evelyn was in 8th grade, her mother got a new stove and electricity came to the farm. There was so much excitement about the new stove. Her father put in a separate wind charger and generator.

“It was magnificent to have lights in the house, and an electric iron with steam. It was just like heaven to have electricity,” Evelyn recalled.

The family even got a new refrigerator.

After completing high school in Dupree in 1954, Evelyn went to work babysitting for a couple who were teachers at the high school. A year later she married Calvin Anderson. The couple got to know each other through family gatherings since one of Calvin’s sisters married Evelyn’s older brother. The newlyweds moved to his family homestead and over the years raised three children, Lonnie, Vicki, and Perry, who have their own families. She is proud to have six grandchildren and seven great-grandchildren.

The family lost their house to fire in 1989. When asked what she missed most from the kitchen where she raised her family, Evelyn said it was her stove. Her husband, Calvin, bought her an electric stove at an estate auction in Faith a few years earlier. It was black with stainless trim, which initially caused some consternation since the rest of the kitchen appliances were white. But Evelyn came to love it especially since it had French doors on the oven which opened from the center.

“It was the handiest thing, to have oven doors that opened in the front. I’ve looked many times and haven’t seen one since,” said Evelyn.

The stove also had a built-in roasting pan in the bottom drawer. She said, “It was wonderful for baking but also for making jerky from deer or antelope when someone had been hunting. We hung the seasoned strips of meat from the highest rack in the oven.”

After the fire, the couple moved into town. Not long after Evelyn began work as the newspaper editor of the West River Progress in Dupree. She retired the first time in February 2007. Sadly, Calvin died two months later. She eventually went back to work at the Isabel Dakotan newspaper and retired again at the age of 75.

Reflecting on her long life Evelyn said, “I love to cook and bake! I give my mother a lot of credit for having the patience to teach me how to be a good cook and baker. I have to be honest, sometimes it was fun and other times it was a lot of work. But most of the time it was appreciated. Now I am a pie baker for family gatherings and fundraisers, church auctions and friends. I also can beet pickles, tomato juice, salsa, jams and jellies, and apple butter. I have shared my recipes and expertise over the years with my family. I have lots of company and I love to share with my friends.”

Whip cream cheese, powdered sugar and 1 1/2 cups Cool Whip together and spread evenly on crust. Keep cool in fridge. Prepare pudding with milk. Beat for 2 1/12 minutes on high. Let set in fridge for five minutes then spread over cream cheese layer. Final layer is the rest of the container of Cool Whip, spread evenly over the pudding layer. Top with chopped nuts and chill or freeze.

You will need a double boiler or a metal or glass mixing bowl that fits tightly over a medium sauce pan, a large colander or strainer, a trifle dish or decorative serving bowl.

Place eggs, sugar, lemon juice and butter in a double boiler or mixing bowl over boiling water. Stir constantly and cook until thickened. Remove from heat and set aside to cool. (While cooling, drain fruit, below.) When cool, fold in whipped cream and marshmallows.

Drain canned fruit for an hour. Fold all fruit into custard mixture. Turn into trifle bowl or serving dish. Chill overnight or for 24 hours.

Note: You will need a rosette iron which is a wooden two-prong handle with three cast aluminum molds. The handle only holds two molds at a time but you have three to choose from. This recipe is easy to make & fun to do! Makes approximately 40 cookies.

Add oil and preheat Fry Daddy to 375° as directed. Alternately, add an inch or more of oil to small saucepan wide enough to fit rosette iron. Heat to 375°.

Heat rosette iron in hot oil for 2 minutes. Drain excess oil from iron. Dip in batter to ¼ inch from the top of the iron, then dip iron immediately into hot oil. Fry rosette until golden, about 30 seconds. Lift out and tip to drain excess oil. With fork, push rosette off iron onto a cooling rack placed over paper towels. Reheat iron 1 minute and continue.

You will need two large saucepans and a two-quart baking dish.

Add cheese sauce to cauliflower mix and toss to coat. Transfer to a greased two-quart baking dish. Combine topping ingredients and sprinkle over casserole. Bake uncovered at 350° degrees for 40 to 45 minutes.

Pour batter in to a greased 9×13 cake pan. Bake at 350° for 45 minutes. Test cake with toothpick before removing from oven to be sure it is done.

Are your kids bored? “Be an Explorer” series uses Facebook Live to introduce them to scienceSouth Dakota beef producers reeling from COVID-19 epidemic and price irregularitiesUSDA calls for peer reviewers for proposals to help socially disadvantaged and veteran farmers and ranchers
You have 1 more free access views left