A win for Indigenous representation in Rapid City

Last Wednesday, members of both the South Dakota Senate and House approved a redistricting map that was viewed as a compromise between differing interests. The new map, referred to as the Sparrow map, was backed by the Senate and had supporters in the House that led to its passage.

Far-right conservative Republicans in the House viewed the Sparrow map as an attempt to undermine their ability to win elections in parts of South Dakota like Brown County, the Sioux Falls area and Rapid City. Their position slowed the special session as House Republicans held multiple closed-door caucus meetings to garner opposition against the Senate’s original proposed Blackbird and the new Sparrow map. They wanted to push a map that would have kept legislative district lines similar to their current positions.

Yet, the state’s population has shifted towards urban areas in the last decade as reflected in the U.S. Census data and a new map is needed to reflect that change. District lines in Rapid City and Sioux Falls, among other areas, continued to be a sticking point going into Wednesday’s session. In a crucial win for Indigenous representation, the northern area of Rapid City was included in a single legislative district with the eastern part of the city.

Senators who pushed the Sparrow map described it as a compromise that had to be made to reflect shifts in the state’s population over the last ten years. Lawmakers also pointed out that the voting rights of their Indigenous constituents had to be protected as directed by federal law.

The final hours of deliberation for lawmakers did not include House Majority Leader Kent Peterson, R-Salem, who suffered an unknown medical episode Tuesday night. The House GOP was deliberating over Sparrow, which a group of legislators from northeast South Dakota had ironed out with the help of House and Senate leaders, when Peterson collapsed.

He was escorted from the Capitol building via stretcher and taken to a Pierre hospital. While he was not physically present Wednesday morning, Peterson did attend the floor session remotely, voting in favor of the Sparrow map.

Under the new boundaries, legislators said they would be working to win votes in unfamiliar territory, and several could be pitted against each other in next year’s primaries. In the end, the process over the past several months was riddled with self-interest among lawmakers.

With passage of House Bill 1001, the vehicle by which Sparrow was carried, the legislation now awaits Gov. Kristi Noem’s signature. 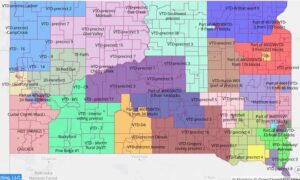 PHOTO COURTESY OF THE SOUTH DAKOTA SECRETARY OF STATE Sparrow map was approved by the Legislature.