A reminder of this protection was sent out by the Associated School Boards of South Dakota a month prior to the graduation ceremonies in May for SD schools.

The school’s policy prohibits adorning caps with any decorations, but the state law protects the rights for Native students to wear culturally significant objects or items on graduation items.

Apparently, this discrepancy was not one that BHS Principal Paul Von Fischer and his staff members were aware of, according to Livermont.

In an Argus Leader interview with Reporter Trevor Mitchell, Livermont said Von Fischer “helped me in my academic career. He’s not a racist or a bigot. He was just trying to enforce a school policy, and he infringed on state law.”

“When we gave him the feather, it was a proud moment for us. Miles has worked hard throughout high school to reach his goals.  With the law passed last year, I didn’t think there would be any problem with him wearing a feather whatsoever. It’s maddening that we had to force the issue when there shouldn’t have been any issue to begin with, but that’s par for the course for native people everywhere,” said Livermont’s father, Ross DuBray.

Livermont’s mother, Tasiyagnunpa Livermont Barondeau, expressed similar sentiments. She said the pedanctic following of policy betrays a problem not so much with the people personally, but with the institution, and said educators should be better educated about the law.

Barondeau said the Native American community is invisible outside the college campus programs and initiatives. The attention to cultural diversity and education on the South Dakota State University campus does not adequately transfer to the community of blue collar workers, Barondeau said.

This incident “didn’t open Pandora’s Box,” Barondeau said, “it’s been open, and you can’t shove it all back in.”

Barondeau was referring to the issues, concerns and contentions between non-Natives and Natives in and around Brookings.

She said that in places like Eagle Butte, traditional honorings and wearing traditional regalia or items is the norm. East river has smaller tribes and that fact may contribute to the idea that many non-natives east river consider Native Americans and their interests as an after-thought or think of them in historical terms, but not as a living people with an actively vibrant culture.

In a two-hour meeting Barondeau had with school administrators, Principal Von Fischer expressed concern about being fair. Barondeau said Von Fischer asked, “What about all of the other cultures?”

Barondeau said he also expressed concern about distinguishing from individual family preferences or traditions, and cultural traditions when he asked, “How do you make sure people are not making things up?”

Barondeau said she was tired of having to educate people about her Native American culture, and even though she is on the Brookings Reconciliation Council, established under Governor Mickelson created the Century of Reconciliation and the Revolving Economic Development and Initiative Fund.

Barondeau serves on the Council, which has been working for decades to educate the public about Native American cultures and concerns.

“We can educate an individual, but nothing changes institutionally,” Barondea said. “People need to quit acting like we’re the vanishing noble savage.”

In a petition Barondeau posted on Change.org, she requested an immediate public apology for the incident, and requested the following in an effort to ensure this kind of situation does not happen again:

Call for a special meeting of the school board to address the following:

According to the Argus Leader, the school issued a public apology stating, “On behalf of the Brookings School District, I want to offer a sincere apology for events that transpired at the graduation ceremony for the class of 2019,” which was also published in a statement in the Brookings Register on Tuesday, May 27.

He added that the district “regrets the misapplication of its longstanding practice of denying modified mortarboards and gowns at graduation” and will “take the necessary steps to ensure students are allowed to express pride in their tribal heritage at future school honorings and graduation ceremonies.”

The Argus leader also reported that Livermont said von Fischer also personally apologized to him during a meeting Wednesday morning, although he said the public apology coming from someone not involved with the incident felt sort of like “a parent apologizing for their son.”

After the long meeting Barondeau had with the administration, she was able to get on the school board agenda for a discussion with board members about moving forward and ensuring that what happened to her son would not happen to others.

“We need to figure this out,” Barondeau said, “What happens if a woman wearing a hijab” graduates from Brookings, Barondea asked.

“We’re trying to raise global thinkers in a global community,” she said.

As of June 4, the petition Barondeau posted received 6,681 signatures, and she said she has received multiple calls from people of different tribes in support of her efforts because of their own concerns for their own children growing up in the Brookings school system.

Barondeau expressed respect for the schools on Cheyenne River, where these kinds of cultural sensitivity issues are minimal if they exist at all. 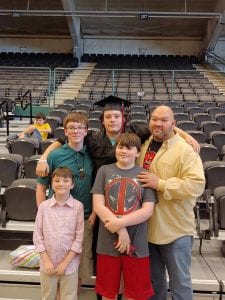