Concerns arise over merger of S.D. agricultural and environmental agencies 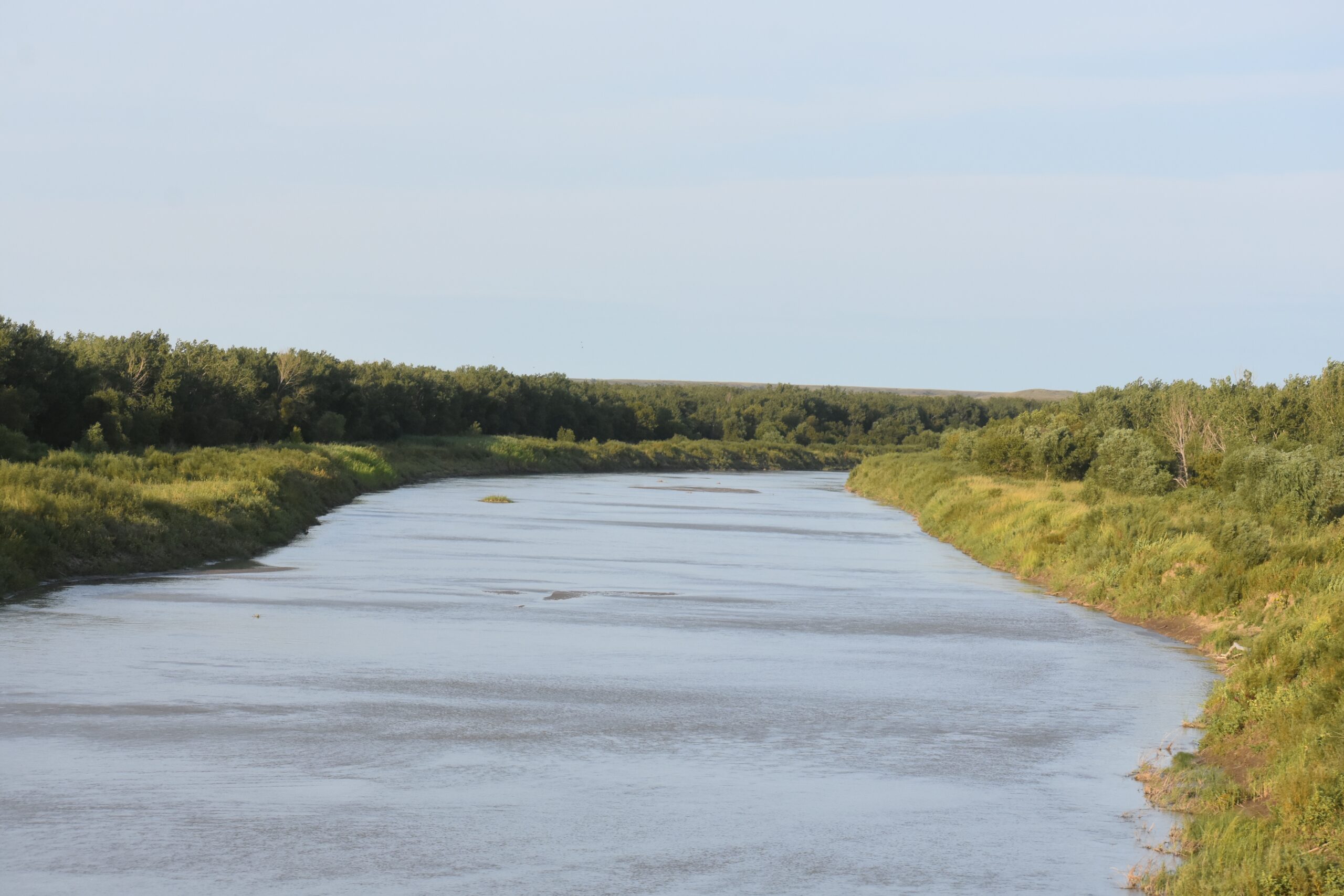 PHOTO BY ALAINA BEAUTIFUL BALD EAGLE
Some environmentalists are worried that waterways such as the Cheyenne River, shown here, could see less protection from agricultural wastes if creation of a new state agency reduces regulation of farming operations.

Some South Dakota farmers, ranchers and environmental advocates are concerned about Gov. Kristi Noem’s plan to combine the state Department of Agriculture and Department of Environment and Natural Resources into a single agency and are wondering what the new agency could mean for the state’s largest industry and the regulation of agricultural practices and pollution.

So far, almost no details have been released about the merger and the new agency that will result, causing concern among many whose lives and livelihoods depend on agriculture and the successful regulation of the industry.

Based on a News Watch analysis of surrounding states, South Dakota would become the only state in the Great Plains region that does not separate its environmental protection agency from its department of agriculture.

The planned merger has the potential to profoundly reshape the complex relationship between agriculture, the environment, and the people charged with promoting and regulating the industry. But the governor’s office has not yet released a plan on how the new agency will work, what the merger will cost or save in terms of tax dollars, if state employees will lose their jobs, what its budget will be or how regulation may be affected.

Some South Dakota agricultural leaders are concerned that the current Department of Agriculture’s mission to “promote, protect and preserve” the industry could be diminished under the new department.

Environmental advocates, meanwhile, say they are worried that the DENR’s mission to protect public health and the environment will be undermined, given the Noem administration’s support for the agricultural industry, including her push to expand the number of concentrated animal feeding operations, or CAFOs.

“Without knowing all the details, it’s hard to say exactly what might happen,” said Jay Gilbertson, the manager of the East Dakota Water Management District who is a staunch advocate for water quality and strict regulation. “It’s hard for me to imagine what the advantage of this merger is.”

The concerns of farmers and ranchers is that even though the Noem administration has been supportive of the agricultural industry, future governors may take a different approach, said Scott VanderWal, president of the South Dakota Farm Bureau Federation. If a future governor appoints a department secretary who favors tougher environmental regulation of agriculture, there won’t be someone of equal rank to push back, he said.

“Historically, there have been some issues that come up where the Department of Ag and the Department of Environment and Natural Resources have not met on the same side,” VanderWal said. “Most of the concern would be that the ag department would turn more toward regulation, and maybe have a lack of understanding of what [farming] operations need.”

VanderWal said the farm bureau will wait until the group’s members have a chance to discuss the merger before taking a formal position for or against the plan.

Details on the merger are hard to come by because they don’t exist yet, said Maggie Seidel, senior adviser and policy director for Gov. Noem. The merger, announced in an Aug. 27 news release, calls for current Department of Environment and Natural Resources Secretary Hunter Roberts to take the top job at the Department of Agriculture on Sept. 8 and officially begin the process of merging the two disparate departments. The stated goal for the merger is to streamline the functions of both departments and make more efficient use of tax dollars.

The new department will be known as the Department of Agriculture and Natural Resources. Beyond the name and who will be in charge of the new department, most details still need to be ironed out, Seidel said.

“There have been some initial conversations that have already taken place, but Secretary Roberts will lead a lot of those efforts,” she said.

If current budget and staffing levels are maintained, the new Department of Agriculture and Natural Resources would have roughly 405 employees and a budget of about $73.4 million. At 405 employees, the new department would be similar in size to the Department of Public Safety, which includes the state highway patrol and Office of Emergency Management and is budgeted to have around 428 full-time employees.

Seidel would not say how long the governor has been contemplating the merger. The plan, though, is to have the new Department of Agriculture and Natural Resources budget set before Noem delivers her annual budget address to the Legislature in early December, Seidel said. Roberts would have roughly three months to devise a budget and plan the merger.

Even after the merger plan is finalized, the South Dakota constitution requires Noem to submit an executive order outlining the merger to the Legislature within five days of the start of the 2021 legislative session on Jan. 12. Legislators would then have the opportunity to pass a resolution disapproving the merger. If no such resolution is passed within 90 days, the merger would go into effect.

Early critics of the merger plan say they struggle to think of any scenario in which the merger would lead to improved outcomes for the environment. At least one Democratic state senator has indicated his willingness to push back against the merger.

Industry a source of waterway pollution

“What’s the old saying, ‘Out of sight, out of mind?’” said Kelly Kistner, president of the South Dakota division of the national conservation organization the Izaak Walton League. “You can support a clean environment, healthy natural resources and agriculture, but there will be times and some issues, where it will be very difficult to support both.”

Kistner said in an email to News Watch that the new combined department could reduce the environmental watchdog role now played by the DENR. “The division believes the people of South Dakota need a department to be their watchdog for our water, air, and natural resources.”

Agriculture is one of the biggest sources of pollution in South Dakota, largely because it is the state’s biggest industry but also because it uses land and consumes natural resources. Runoff from farm fields and pastures carries sediment containing fertilizer residue into lakes and rivers, which can cause blooms of toxic, blue-green algae. Livestock with unfettered access to rivers and streams, meanwhile, can leave waste on and around a river’s banks and cause elevated levels of e.coli and other fecal coliform bacteria in the water. Individual CAFOs that house thousands of hogs or cattle and in some cases more than a million birds can each generate millions of gallons of animal waste annually.

More than three quarters of the river and stream miles the DENR monitored for water quality between 2014 and 2019 were found to be impaired for at least one of the intended uses, such as fishing or swimming. The Big Sioux River, which runs through numerous farm fields and through downtown Sioux Falls, is considered impaired for immersion recreation, which is any activity that includes human contact with the river water.

Part of DENR’s role is to both monitor water quality and to prevent too much pollution from entering rivers and lakes. Effective regulation is difficult even under the best conditions in South Dakota, given the state’s relatively lax rules regarding farm runoff, Gilbertson said. Combining the agency that regulates farm pollution with the organization that promotes farming could make the job more difficult.

“In an ag state, where many of our water quality issues are related to agriculture,  and that’s not because ag is inherently bad, it’s because it’s all we have, putting ag promotion in the same group as the folks who are charged with protecting the resource, protecting our water, protecting our air and all the rest, would seem to present a conflict,” Gilbertson said. “You know, you can’t both promote an activity and then regulate that activity effectively.”

Noem downplayed those concerns during an Aug. 31 interview hosted by the Sioux Falls Rotary Club.

“Some of the best stewards of our land are farmers and ranchers. They’re going to pass this on to their children, grandchildren, great grandchildren so they’re very interested in keeping it as pristine as it is today,” Noem said.

“Also, within agriculture and the Department of Environment and Natural Resources, there’s all kinds of checks and balances and partnerships and federal government requirements that make sure that we are doing due diligence and protecting the environment,” the governor added.

Seidel said there is no significance to dropping the word “environment” from the new department’s name. Cutting the word from the Department of Agriculture and Natural Resources’ name was about keeping the name short, she said. Plus, the federal government requires and pays for a substantial portion of the environmental protection and monitoring work that DENR currently does, Seidel said, so it will happen regardless of an agency’s name.

About 43%, or $10.5 million, of the DENR’s roughly $26 million annual budget comes from the federal government.

“This merger doesn’t, in any way, reduce or limit the long-standing environmental regulations and authority that DENR has,” Seidel said.

Still, there is reason to worry about merging two major state government departments that have such different and often competing missions, said David Osterberg, a senior researcher focusing on environmental policy at Common Good Iowa, a public policy group in Iowa. In states whose economies are dominated by agriculture, including in South Dakota and Iowa, governments tend to favor policies that make agriculture as profitable as it can be, even if the profits come at the expense of environmental protection, Osterberg said.

“If you put these agencies together, your ag establishment, your corn growers and soybean people and your cattlemen, will just have a way in which they will keep anything approaching regulation away from them,” he said. “Because that’s what departments of Ag do; they protect agriculture.”