The youth, young adults and adults gathered in Eagle Butte Saturday morning May 11, 2019 to remember Happy (Carmen Charger) a Cheyenne River Member and resident whose death was suspicious.

“We remember Happy and all our murder, missing and stolen indigenous people today. Allowing our youth to lead we can build them a brighter future,” said Waniya Locke of Standing Rock.

Marchers also gathered to bring attention to all Missing and Murdered cases involving indigenous people all over Turtle Island and beyond.

Cheyenne River members were joined by tribal members from Lower Brule, Standing Rock and a sole member of the Aleut Nation of Sandpoint Alaska.

“As Indigenous people it is up to us to protect and take care of our environment. This includes protecting our women to ensure our survival and to keep our spirituality strong. That’s how sacred our women are to us, they are the keepers of our future,” said Danny Grassrope of Lower Brule.

Marchers wore red, carried signs and chanted as they marched from the Upper Elementary down Main Street for an end to these crimes against indigenous nations escorted by Cheyenne River Police.

When they came to the intersection of Hwy 212 and Main Street, the group held space and had a round dance. They then moved to a nearby vacant lot where people spoke, and a prayer was given.

The rain and cold did not dampen the marchers’ spirits or resolve. Several marchers said the rain was a reminder that “our relatives are with us right now.”

The March continued to the No Heart neighborhood, where a prayer was said by Joye Braun, Front Line Community Organizer, Indigenous Environmental Network and a CRST tribal member, at the sight where Charger was found. The group then continued to a host residence where a meal was provided, and survivors and family talked and reflected on the day, mindful of others who have been lost to violent crimes and human trafficking.

“What we know is 84% of Indigenous women will experience violence in their lifetime. We know resources are limited and legal jurisdiction is convoluted. However, that is exactly why we must work harder to find solutions and we must move quickly. We don’t have accurate statistics for Cheyenne River. But we hear the stories. It’s true also that should the three man-camps be built in South Dakota, two of those are close to our homelands on CRST; our women and children will be put in danger. We cannot let that happen. It takes all of us to be part of the solution. To not judge our fellow tribal members, but to stand behind them and protect each other. Love is stronger than hate. Not one more stolen sister, not one more,” said Braun.

UNICEF released a report on Forbes Magazine reporting that as of the end of 2018, 21 million people were victims of trafficking and over 4000 of those were in the U.S. Traffickers profited over 32 billion dollars as of 2018. 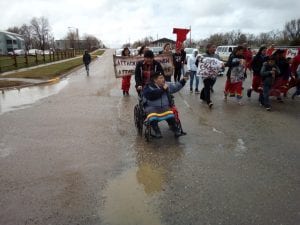 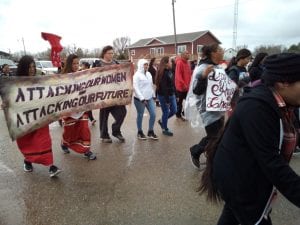 Marchers make their way down Main Street despite the rainy conditions to raise awareness and recognize missing and murdered indigenous women. Photo by Floyd Braun