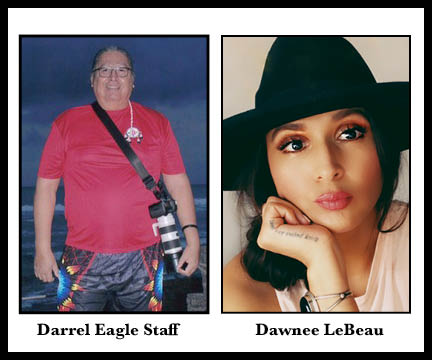 “We deeply believe in the transformative power of artists and culture bearers to strengthen and uplift communities,” said First Peoples Fund President Lori Pourier (Oglala Lakota). “No matter their medium, each artist is sharing a story that reflects the incredible range of Indigenous cultures across the United States. Whether growing their entrepreneurial spirit or revitalizing, reconnecting, and reclaiming ancient Indigenous practices, their work illuminates what is possible and inspires others. Their success creates a ripple effect that impacts their community and beyond.”

LeBeau’s project is to create a photography camp in the summer of 2020. She will invite different people in the community to come together for five days to learn the basics of documentary photography. The purpose of the camp is to bring awareness to how modern media, such as cell phones and video, function as documentation of current Indigenous culture. She aims to place participants, and particularly youth, in historical context, stating, “We are the documentarians of our own society.”

Her work brings together all aspects of cultural preservation: photography, oral tradition, writing and pictorial images. She will seek the input and participation of Lakota culture bearers, those people who strengthen Indigenous communities and all generations with their traditional knowledge. LeBeau is a part of Natives Photograph (nativesphotograph.com), a space to “elevate the work of Indigenous visual journalists and bring balance to the way we tell stories about Indigenous people and spaces.”

“I want the youth to know that every photo they are capturing right now on their devices is a form of data preservation for their family. They can tell a story to the next generation after them. They are already doing the preservation work to document our families and our communities in the present day. I want the youth to organize how they can showcase that in their families,” said LeBeau, who shared that she hopes the experience of working in the arts will build a stepping stone for further internships in the art realm.

The emphasis of the First People’s Fund to strengthen understanding and connection to the past is part of the work of Darrel Eagle Staff as well. According to the First Peoples Fund, “Inaccurate narratives and pervasive stereotypes perpetuate harmful mentalities about Native communities. Uplifting the wide range of expressions in our communities helps illuminate a more accurate and nuanced understanding of who we are.”

Eagle Staff’s project will use photography to explore and transform the narrative of the Wounded Knee Massacre in the minds of residents of the Cheyenne River reservation by creating an installation at the Lakota Cultural Center in Eagle Butte. In the summer of 2019, a visitor came in to the center asking for images related to Wounded Knee in addition to the existing mural of Chief Spotted Elk. Eagle Staff’s mother, a volunteer, knew he had some photographs and shared them. That gave Eagle Staff the germ of the idea to find out and document more about the role of the people of Cheyenne River in the Wounded Knee Massacre.

Eagle Staff knew that people from Cheyenne River went down to Wounded Knee and there are descendants of those who were wounded and killed.

“Our tribe should know our own history. We’ve been losing elders and our oral history,” he said as he pointed out that there’s a need to increase awareness in tribal youth and others.

“We get December 29 off for a holiday but people don’t know why,” he said.

Eagle Staff recently attended the final feed of the 2019 Chief Spotted Elk Memorial Ride and asked for stories from the massacre. He’d previously discovered that women and children are buried in the mass graves along with the men. He asked if the riders knew where the mass graves were. “Where are the women and children buried? If the riders don’t know, who does?” he wondered.

The installation will include photographs of artifacts that are currently held by the tribe but cannot be displayed for fear of decay or theft. It will also include images of the Wounded Knee area. In his research, Eagle Staff found the original application for the Wounded Knee historical landmark which tells the Army’s side of the story.

The project will include a book of photographs and interviews with culture bearers who carry stories from Wounded Knee. Eagle Staff hopes to get video of elders telling their stories, but acknowledges that “people are shy.” He hopes to interview his relatives in Red Scaffold to get their stories and to record them while there’s still time. He will also display photographs of ledger art drawn in the winter of the massacre.

“A long time ago everybody was scared of the government. People never told their side of the stories. It’s our time to find these stories,” Eagle Staff said.

Eagle Staff draws inspiration from the works of fellow photographers Tom Murphy and Cindy Geoddel, and from his former wife, who did a calendar years ago for Indian Health Services in Aberdeen. Seeing response to those images encouraged him to capture positive moments in the lives of tribal members. He’s been practicing photography since 2010 when he took a class from Geoddel, and has worked more intensively since he retired from the BIA in 2018. His work includes wedding pictures, senior portraits, sports photography (especially basketball, a sport he knows well from playing in high school and college), rodeos and Indian relays.