Cheyenne River artist says destruction of art will not stop her 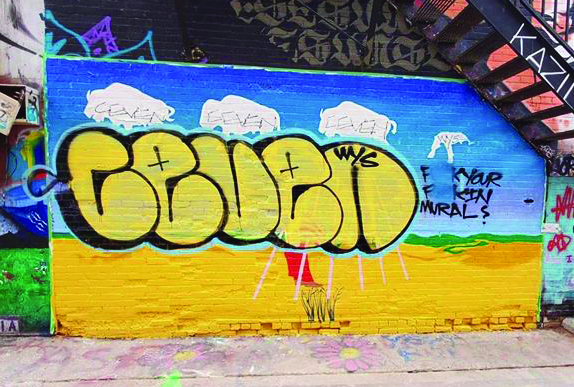 Graffiti and a message containing expletives deface the mural painted by Delaena Uses Knife in commemoration of October’s Breast Cancer Awareness Month. The expletives are partially blurred by the West River Eagle.

Mnicoujou artist Delaena Uses Knife has been cast in news headlines with her award-winning artwork depicting a Lakota woman as a breast cancer survivor and the subsequent and unwanted controversy that came with it.

In September, Delaena won the Regional Health Art Alley Mural Contest which commemorates October’s Breast Cancer Awareness Month. Her art submission depicted a Lakota woman as the backbone of a nation, putting up a tipi by herself with a child in a cradle board strapped to her back. The iconic pink breast cancer awareness ribbon was drawn on the blanket that enveloped the child. Delaena explained that women, no matter what obstacles they face in life, live life in strength. Four white buffalo that floated overhead in the sky above the woman, symbolized clouds of prayer and served as witnesses of the woman’s strength, said Delaena.

Regional Health posted her drawing, along with other submissions from various contestants, explaining that the artists with the most likes would win the chance to paint a mural based on their submitted piece. Delaena’s submission received over 700 votes, and she was announced as the contest winner. She was given a blank wall in Art Alley located in downtown Rapid City, for her mural.

Uses Knife began and assembled a team of volunteers to assist her with the mural, including her dad, Matt, a renowned artist in his own right, who created murals at the Lakota Cultural Center in Eagle Butte.

She regularly updated the progress of her project on Facebook, and had put in over 30 hours of work when she received horrible news last Tuesday- her mural was vandalized with graffiti.

When Dalaena arrived on scene, she saw that 50% of her work was covered in spray paint. The word “Ceven” was painted over the Lakota woman and the tipi. The four buffalo clouds were also defaced.

A message directed at Delaena had two expletives in it. Delaena, a student at South Dakota School of Mines, said she was studying for an important exam when she received the news. She said at first, she did not want to see the graffiti but later changed her mind. With her family by her side, she made her way to the mural, where she was shocked and hurt by what she saw.

After processing the ugly message and assessing the damage, Dalaena said she made the decision to keep moving forward in all aspects of her life, including her academics.

“I just made myself study, and stayed focused on my exam. The good news from me was I passed my big test. That was a huge victory for me because it could’ve just not did the test,” said Delaena. 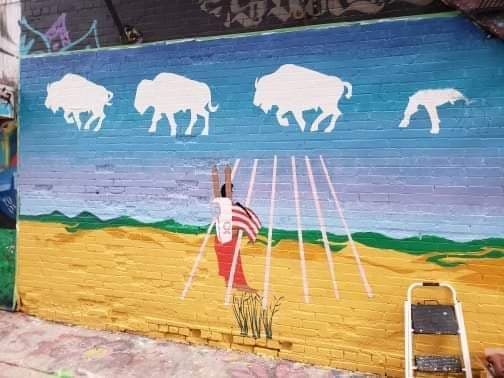 PHOTO SUBMITTED
Delaena Uses Knife’s mural was 50% complete before it was vandalized last week. Delaena has since completed restoring the mural and will unveil it at a ceremony this Friday, October 11. Uses Knife’s commemorates breast cancer survivors.

Delaena said although her artwork received some negative feedback from some people who expressed their disapproval that a drawing of Native American woman was chosen to represent all women, since the graffiti incident, she has gained support from many people of all backgrounds.

“Surrounding businesses like Alex Johnson and the ones that are nearby watch it [the mural] more now. There are some drunks who come by and they say bad stuff, but a lot of people come by and to mainly say, ‘Sorry that happened to you’. Or they ask, ‘Can I take a photo of your work, of you? I’m glad you’re still going’,” said Delaena.

Delaena added that her family and boyfriend have stayed by her side, assisting her with the logistics of the project, even helping her when her hands get too cold to paint.

The graffiti pushed back the unveiling date by one week, and is now scheduled for this Friday at 11 AM. Delaena’s mother, Margie, said she is proud of her daughter.

“She showed me the strength and resilience of Lakota people. We are still here. She said, ‘I forgive them’. Look at how many people are looking at this mural. Many people, native and non-native said they are thankful for her doing this. People are sharing stories of how their mother or their daughter died because of breast cancer. That’s what the tipi was- the people. We women are the backbone of the people. We put up that tipi despite everything,” said Margie.

Margie said she also believes that Delaena’s artwork and message is spiritually guided.

“I know something is wakan about this. We went by New Underwood road, and here there was buffalo right by the road. The sun was setting, and the entire sky was pink. Everything went pink. Things like that don’t just happen. We stopped and took pictures and I thought, ‘This is going to speak to someone’. That is why evil and bad things are trying to stop the good. This is wakan,” said Margie.

Delaena said she turned to her parents’ teachings of resiliency and strength to help her get through the entire ordeal.

“I think about my parents telling me, ‘You have to work twice as hard because you are who you are. You will have to live in two worlds. Don’t forget who you are because everyone will try to change you or remove you. When you stand in the work place or at university, you will be the only Native American there. I think about Jim Thorpe’s winning race. Right before the race started, someone took his shoe, so Jim used a different shoe and ran the race. He still won regardless. People told me not to quit, others told me to find another spot and to go somewhere else. I’m telling you that I’m not moving. I’m not giving up,” said Delaena.

Margie said that she plans to do a wopila, a giveaway, during Friday’s unveiling ceremony, which will take place at the location of the mural at 11 AM.