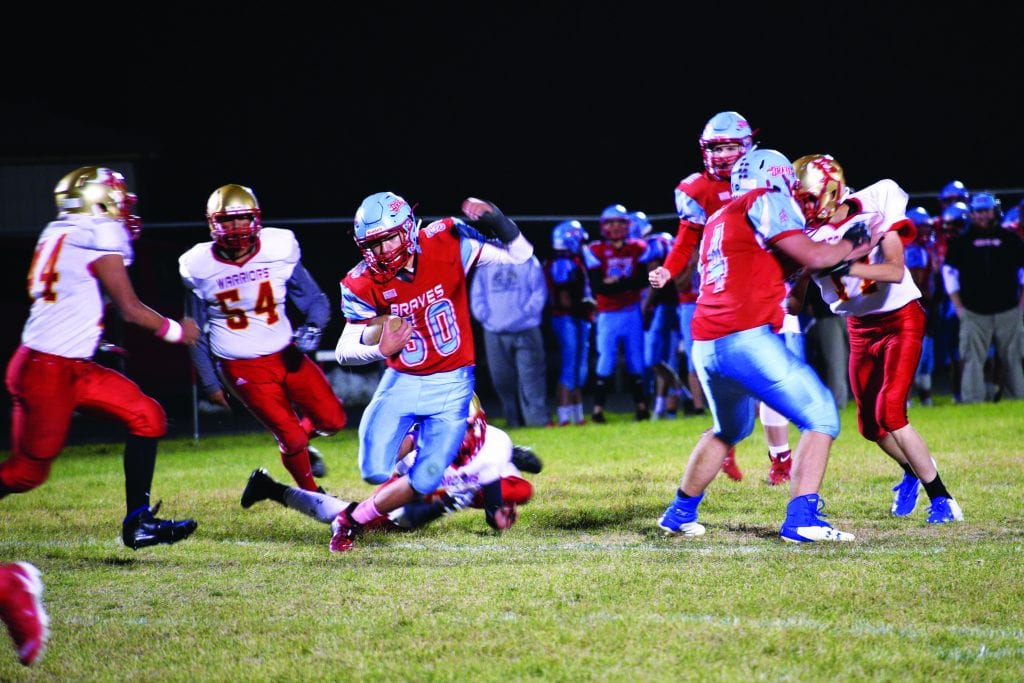 EAGLE PHOTO BY JODY RUST
Carrying the ball down the field in hopes of gaining another first down, Freshman Wiley Harrison pulls past the St. Francis defense. Harrison had six carries in the playoff game held at C-EB Thursday, Oct. 17 and 137 rushing yards.

Cheyenne-Eagle Butte (C-EB) Braves plowed over and past the St. Francis Warriors last Thursday, Oct. 17 in the first ever All-Nations Conference playoff game at C-EB with a decisive 52-12 win.

“As far as focusing on Lower Brule, speed kills in football, and they have one of the fastest guys in our league. So it is going to come down to containing/controlling our edges and rallying to the ball,” said C-EB Head Coach Michael Scott.

“They kind of have a lightning and thunder approach where if their speed guy isn’t the guy getting the ball, they have big guy they like sending up the middle that’s hard to take down,” Coach Scott said.

The defensive lines held the Warriors back, allowing the Warriors few opportunities for open runs to the goal line.

The Warrior’s Daniel Witt was a powerhouse for the Warriors, dragging many Braves on his back as he tried to gain yardage for his team.

When the Warriors did have some good runs, they often penalized themselves with an illegal block or false stop.

On the Braves’ end, penalties were down, as the Braves effectively communicated and for the most part avoided losing too many yards on careless mistakes.

“As far as penalties, we are able to have some more experienced guys out there but we have guys starting from seniors to even a couple freshmen. I think we have a good core of guys that are very coachable and by that I mean if they do something wrong in practice, we correct it and they make the adjustments. That makes all the difference, guys not taking things personally and not getting defensive when being coached up,” said Coach Scott.

While the Warriors inched the ball up the field and made a few break-away runs resulting in two touchdowns, the Braves’ defense held a tight line, making the Warriors work hard for every yard they gained.

The Warriors took possession with a Braves’ fumble and an interception, but the Braves capitalized on the errors of their opponents as well.

Brown Otter finished the game with two interceptions, and on one third quarter play, the Warrior’s snapped the ball too far onto the end zone, allowing the Braves to rush and land on the ball where it landed — across the goal line, giving the Braves a 40-6 lead over the Warriors.

Norris finished the game with four touchdowns and was equally important on defense with four solo tackles and four assists.

Adam Berndt had three solo tackles and four assists with a total of seven tackles against the Warriors, and Mousseau, who scored one touchdown and one two-point conversion, also made an impact on the defense line with four solo tackles, two assists and one quarterback sack.

In the game against Lower Brule, Coach Scott said the team needs to rally to the ball and tackle well.

“With any game, it’s assignment football. Just do your job and the guy next to you has to do his. Know your job and execute… So in either case, we need to rally to the ball, pursuit and tackle well. When we are on offense we have great weapons as well. Simply comes down to executing our game plan,” he said.

The Braves will also need to make sure they know their plays, and in preparation for today’s game, Coach Scott said the team spent time reviewing core plays and concepts to improve play execution.

He explained that one of the biggest hurdles for the Braves’ football program is the offseason preparation, which does not see the kind of involvement needed in a team sport.

The best teams on the field consist of the core four or five players who played in other sports and took advantage of the offseason, team weight room workouts.

“We have good morale and good effort. But that’s the season, last offseason we only had a handful of guys in our weight training program lifting with a coach at least three to four times a week. Football is a team sport that relies on trust. So we need to be lifting as a unit together to build trust in one another and in a program that actually focuses on proper warm up, footwork, speed, conditioning, as well as the strength and weight lifting. Not just going and lifting on their own, only doing the lifts that they like to do and going at a pace they like to go at,” Coach Scott said.

He also said the nine-man All-Nations Conference has been great, and the players have learned that just because C-EB is one of the larger schools in it, that does not mean their wins will come easily.

“I honestly think the biggest thing our players have learned going into next season is the conference is legit and has legit competition,” he said.

Players need to be both psychologically and physically strong, and staying with the team for the whole season is just a part of displaying that strength.

Training with the team in the offseason is another part of it. Staying involved in other sports is a third part, often helping student athletes keep their grades up so that they remain eligible for play.

“The last time we had a winning season at the state level was 2016, and we averaged fifteen to twenty guys a night in the weight room when other sports weren’t in session because a lot of them were out for other sports. Other than that one year, we probably averaged three to five guys every other year, and we would win three games a year,” he said.

Scott said that even in 2016, the last game of the season just so happened to be against Chamberlain, both undefeated in their conference, and so that last game worked out to be a conference championship game.

“We lost, but even had we won, the way the power point ranking system works, we would have had a great record, would have been conference champions, and still wouldn’t have made playoffs that year,” he explained.

As for C-EB football preparing athletes for college play, he said that we have to be realistic. Student athletes who have “embraced the grind” will have no problem at the college level, but the many who have not will meet with culture shock if they make it onto a college team.

“I think being at the state level has at times hurt college recruit chances, because we’ve had guys who are college caliber athletes that have worked very hard when the majority of the rest of the team hasn’t — and that does not bode well for getting recruited when the team has a bad record and you don’t look good on film because others around you aren’t doing their jobs. The goal of this All Nations is to be playing meaningful games like we are playing now and build the program, and we coaches feel that’s exactly what is happening,” he said.

Coach Scott works with Assistant Coaches Les Logg and Larry Elwess. The team matches up with Lower Brule Thursday afternoon at Lower Brule with an aim to move one step closer to a state championship. 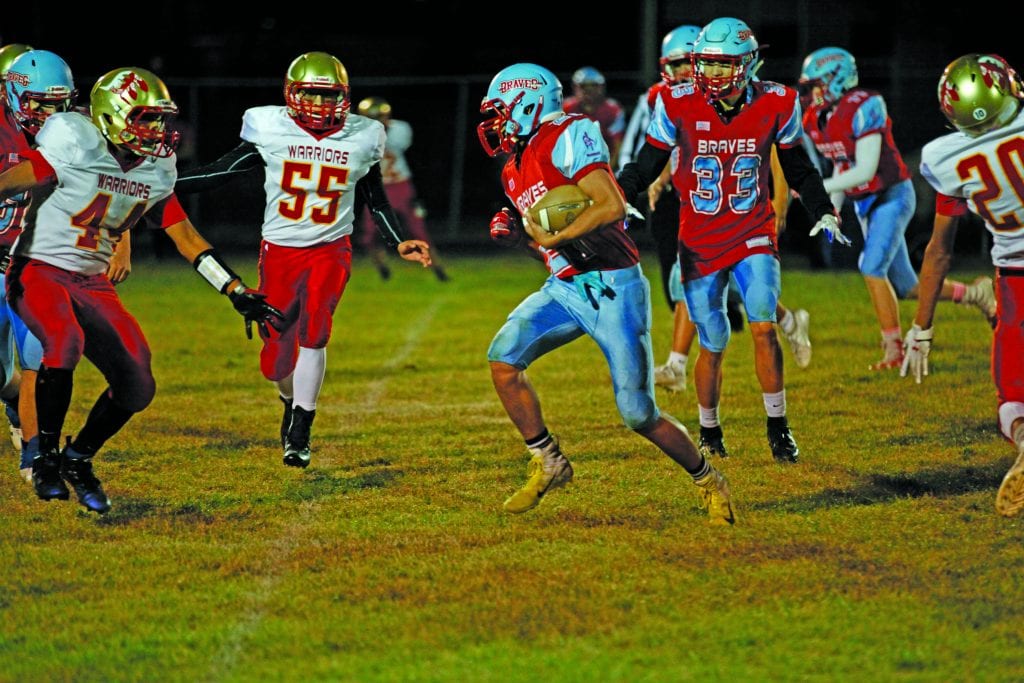 EAGLE PHOTO BY DARREL EAGLE STAFF
A C-EB Brave runner advances the ball toward the end zone during the game against the St. Francis Warriors on October 17.