Upper Elementary  News… Keeping up with the Newspaper Club

The orange peel candle hack is a life hack that helps you survive in the wilderness when your flashlight fails. First, cut the orange in half. Then carefully run your thumb around the edge of the peel, also known as the rind. Keep going, so that the peeling is a bowl. It is important to leave the middle white, pericarp or albedo, part attached to the bowl. This will be used as the wick. Next, pour vegetable oil into the orange bowl making sure to pour over top of the wick. Let the orange candle sit for a few minutes so that the wick can absorb the oil. Finally, light the wick and enjoy your candle. If you do not have oil, rubbing alcohol or lighter fluid would also work, but be careful as they are flammable. DO NOT do this life hack without an adult to help you. 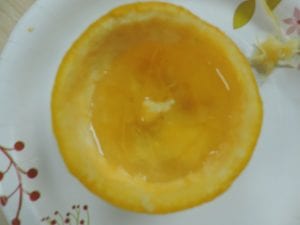 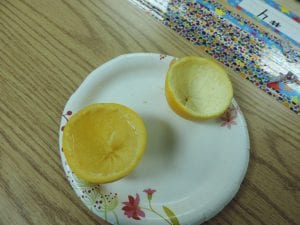 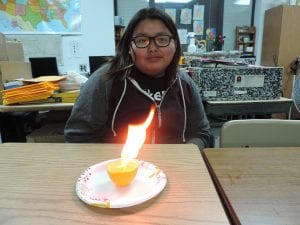 ​Eighth second and third grade students have been working on their dance moves and preparing for their presentation for the Christmas Concert this coming December 10, 2019. These students attend dance practice after school from 4:00-5:30 every Monday through Thursday. We hope everyone will come see them perform at the concert. Dance Club’s second grade students are Whitney La Plante, Ayanna Adams, Kazmira Runs After, and Meadow La Croix. The third grade students are Cicada Brown Thunder, Talisah La Croix, Rhondee Ganje, and Maylea Yellow Earring. 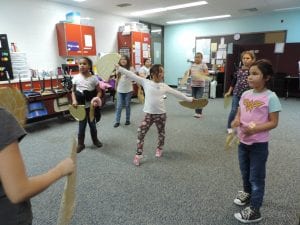 On Friday, November 15, 2019, students in Ms. Barcelona and Ms. Anderson’s class went on a bowling trip to Pierre, South Dakota as part of the students’ incentive for completing and exhibiting changes in their behavior. This was also a great opportunity for these students to participate in leisure tasks outside the school environment, develop their social skills and experience more intense sensory input to their muscles and joints.

The origin of the Christmas tree

​The first documented tree was dated back in 1510 in Riga, Latvia.  Back then they called it the “Paradise Tree” and decorated it with ribbons and apples.

​A German picture from 1521 shows a tree being paraded through the streets and a record from 1570 says a decorated tree was displayed in Bremen, Germany. In many countries people hung evergreen boughs over their doors and windows. In many countries evergreen trees were believed to keep ghosts, witches, illnesses, and evil spirits away. The Christmas tree is now decorated with many vibrant colors and to top it off, a beautiful star is placed on top of the tree.

​The second grade fundraiser “Spirit and Pride” Braves attire has been extended until November 22, 2019. When Miss Walters was interviewed she stated that she had only received a few orders and wanted to give the community a chance to get in on these great deals. If your student has not brought home a pamphlet and you are interested in ordering, please let her or your child’s teacher know.

​This year the Missoula Children’s Theatre will be putting on the play “Peter and Wendy” on Friday, November 22, 2019 at 7 p.m. in the High School Auditorium. The second showing will be Saturday, November 23, 2019 at 2 p.m. in the auditorium. The benefits of being in a play include building confidence, helping with concentration, development of language and communication skills, encouragement of children to cooperate, developsment  of emotional intelligence, and assisting physical development. Try-outs for the play will be Monday, November 18, 2019. Encourage your children to try out.

Every eight days or so we go through a new selection of students to work on wind storm kits. Students enjoy building the various styles and testing them out. 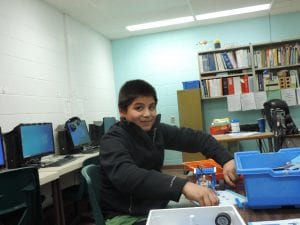 Dathan Little Wounded looks up while creating his masterpiece in Robotics. 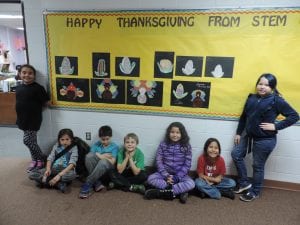 The history of basketball

The history of basketball began with its invention in 1891 in Springfield, Massachusetts. It was founded by a Canadian PE instructor named James Naismith. He was looking for a less injury-prone sport than football. Naismith was a 31-year old graduate student when he created the indoor sport to keep the athletes indoors during the winter.

James Naismith invented basketball because they needed an indoor sport to play in the winter because it was too cold to play baseball or football outside. It was first used in 1891 at the YMCA Training School in Springfield, Massachusetts. The first hoops were actually just peach baskets and the first backboards were made of wire.

Basketball teaches you about being a good team player and it can be a good social sport. Basketball puts a lot of stress on the body and injuries can happen, so it is important to warm up before. Some good warm ups are stretching your muscles and your joints, and cooling down is just as important. Make sure you have plenty of fluids on hand and rehydrate regularly.

The history of golden retrievers

​Golden Retrievers originated in the United Kingdom, England, and Scotland. They shed a lot, particularly at the change of seasons, and require fairly regular grooming. The breed comes in different colors such as golden, lightly golden, dark golden, and cream. Their coat is slightly wavy, long, and water repellant. The dog is also known for having genetic disorders and diseases.

Their name “retriever” came from their ability to retrieve shot game undamaged due to their soft mouth. Golden retrievers are also the 5th most popular dog breeds in the world. Most golden retrievers live to about 10-12 years old. Their temper is reliable, intelligent, kind, trustworthy, confident, and friendly.

The golden retriever is also a popular disability assistance dog. Such as a guide dog for the blind. Also a hearing dog for the deaf. They can also be trained to be a hunting dog, a detection dog, and a search and rescue dog. Since the dog is friendly and has a gentle temper, they are not suited to be a guard dog. Because they have a gentle temperament, they are also the third most popular family dog breed.

Golden retrievers are also rarely picky eaters. They require two hours of exercise or more. They may be fond of playing but they are also highly trainable. They also love water. Since the breed is calm and patient, when they go hunting they can sit quietly and wait for their call.