On the sidelines of basketball courts and football fields you will often see cheerleaders, dressed in their uniforms, holding their pompoms high in the air while they loudly cheer in cadence. Oftentimes, it is their voices that reverberate and fill the air with excitement, pumping up the crowd and players.

Other times, the morale of a team may be low or players may be tired, but a few high-spirited cheers of, “We Will, We Will Rock You!” is all that is needed to help reenergize your favorite players.

Cheerleaders are an important aspect of student athletic success.

But it doesn’t end there, the young women, and sometimes young men, are using their platform to bring awareness to issues that impact their communities.

Throughout basketball season on Cheyenne River, there were times when cheer squads from local schools such as Tiospaye Topa and Cheyenne-Eagle Butte painted the symbolic red hand print across their face, representing the Missing and Murder Indigenous Women epidemic that plagues tribal nations across the U.S.

At their last home game, the Tiospaye Topa Thunderhawks performed a song about MMIW while the young Baby T’s cheer squad danced in the center of the court. This was not the first time the Thunderhawks’ cheerleaders used their platform to speak out- they did an MMIW presentation to a packed house in Faith during the Little Moreau Conference.

One only has to take a look at just how important these young women are within sports. They uplift spirits, encourage athletes to perform their best, and are a positive reflection of their communities, and all the while, the young ladies perform their athletic cheer and dance routines.

Chip Bird Necklace, a longtime cheerleading coach for Cheyenne-Eagle Butte School explained that she started the C-EB Spirit Squad for kindergarten to sixth grade students in order to give the girls an opportunity to participate in the sport.

“I started the spirit squad because my niece, Tia Gunville, was in second grade and there was nothing for that age group. So, I got approval of the school to start the C-EB Spirit Squad K-6. I am very grateful for TECA, who purchased the uniforms,”said Bird Necklace.

Since then, the young C-EB cheerleaders have performed their energetic and lovable cheer routines during halftime, gaining respect and a fan following of their own.

Recently, during the home game of the junior high boys’ basketball game against Dupree, the young spirit squad and junior high cheerleaders celebrated Parent Night and honored their supporters.

As the girls performed their last dance routines, fans loudly cheered and showed their adoration for the young ladies.

Bird Necklace summed it up nicely– “I have seen cheerleading bring out the best of cheerleaders. We talk about goal setting, to be kind to others. We are a team- sportsmanship, respect for others and themselves, and to keep up with their school work. These are important lessons that the girls learn. Through the years of cheerleading, I have seen the girls I have coached become teachers, staff working in the school systems, Girl Scout leaders, nurses, mothers and civic-minded women. I have witnessed when they first start, some are shy, and then they blossom beautifully with self-confidence and worth. What is a cheerleader? She encourages and motivates the team and the fans. She’s a spirit yeller.” 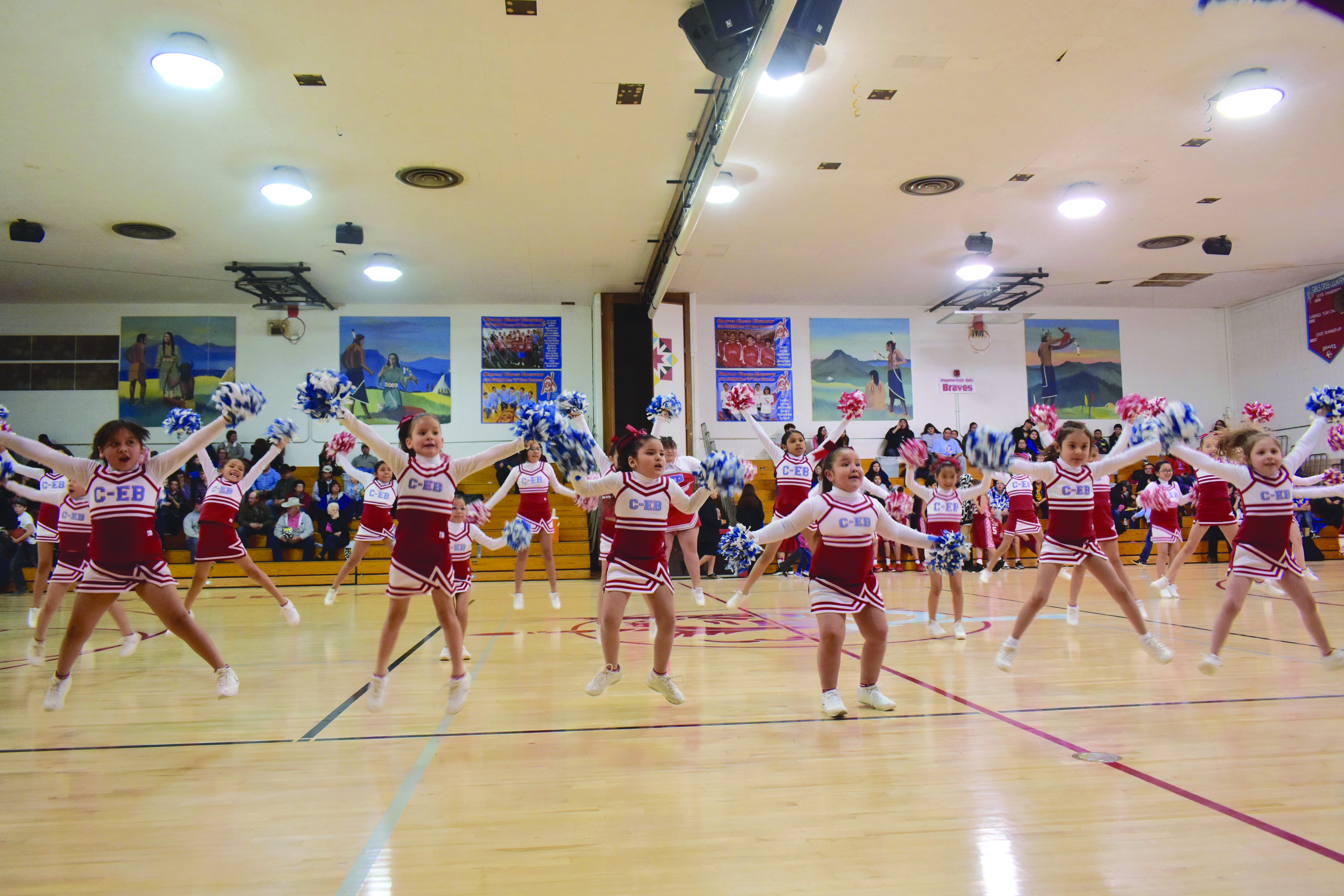 EAGLE PHOTO BY ALAINA BEAUTIFUL BALD EAGLE
The C-EB Spirit Squad dazzles the crowd with their jumps and movements during the junior high boys’ basketball game between Cheyenne-Eagle Butte and Dupree. The girls are coached by Chip Bird Necklace. 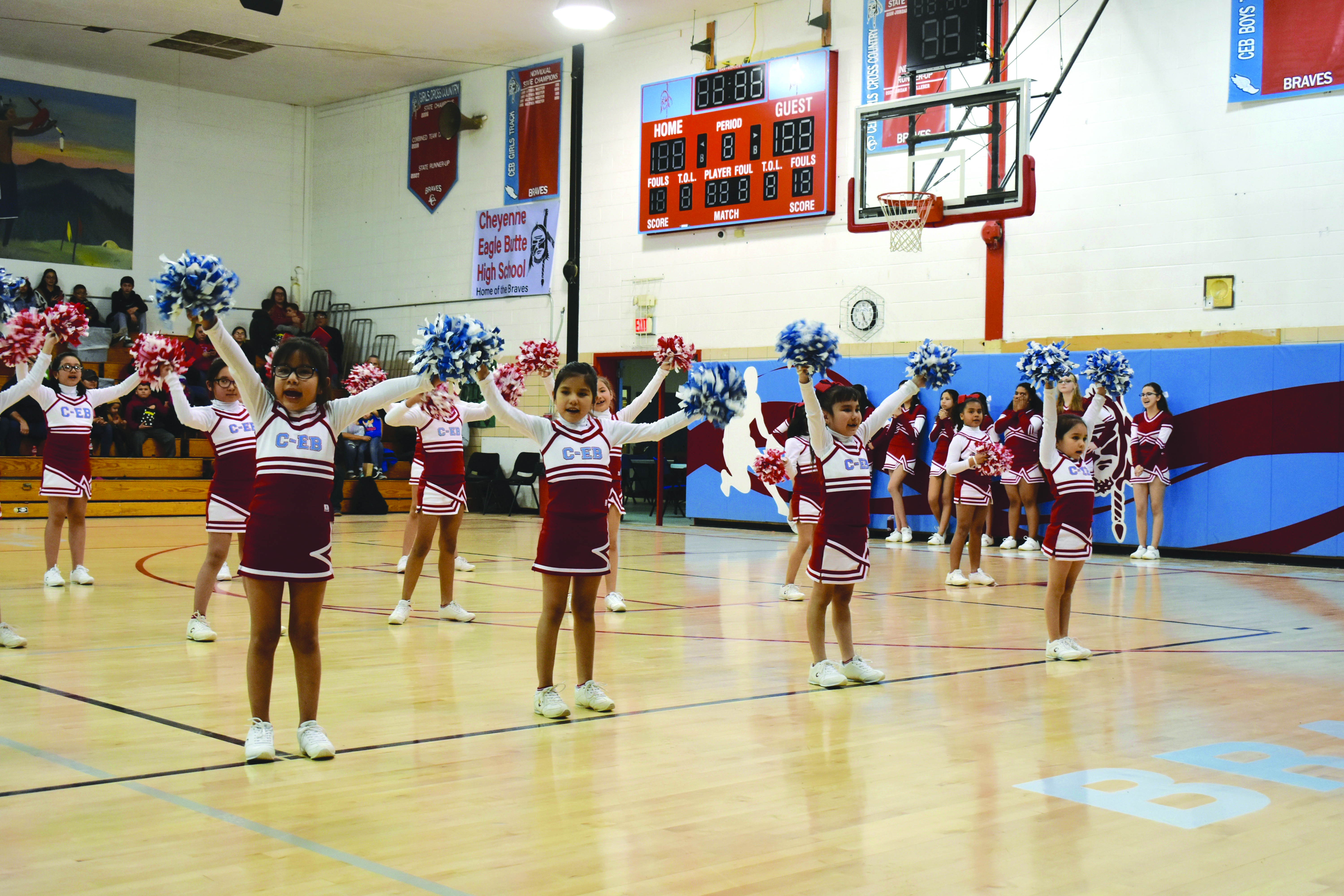 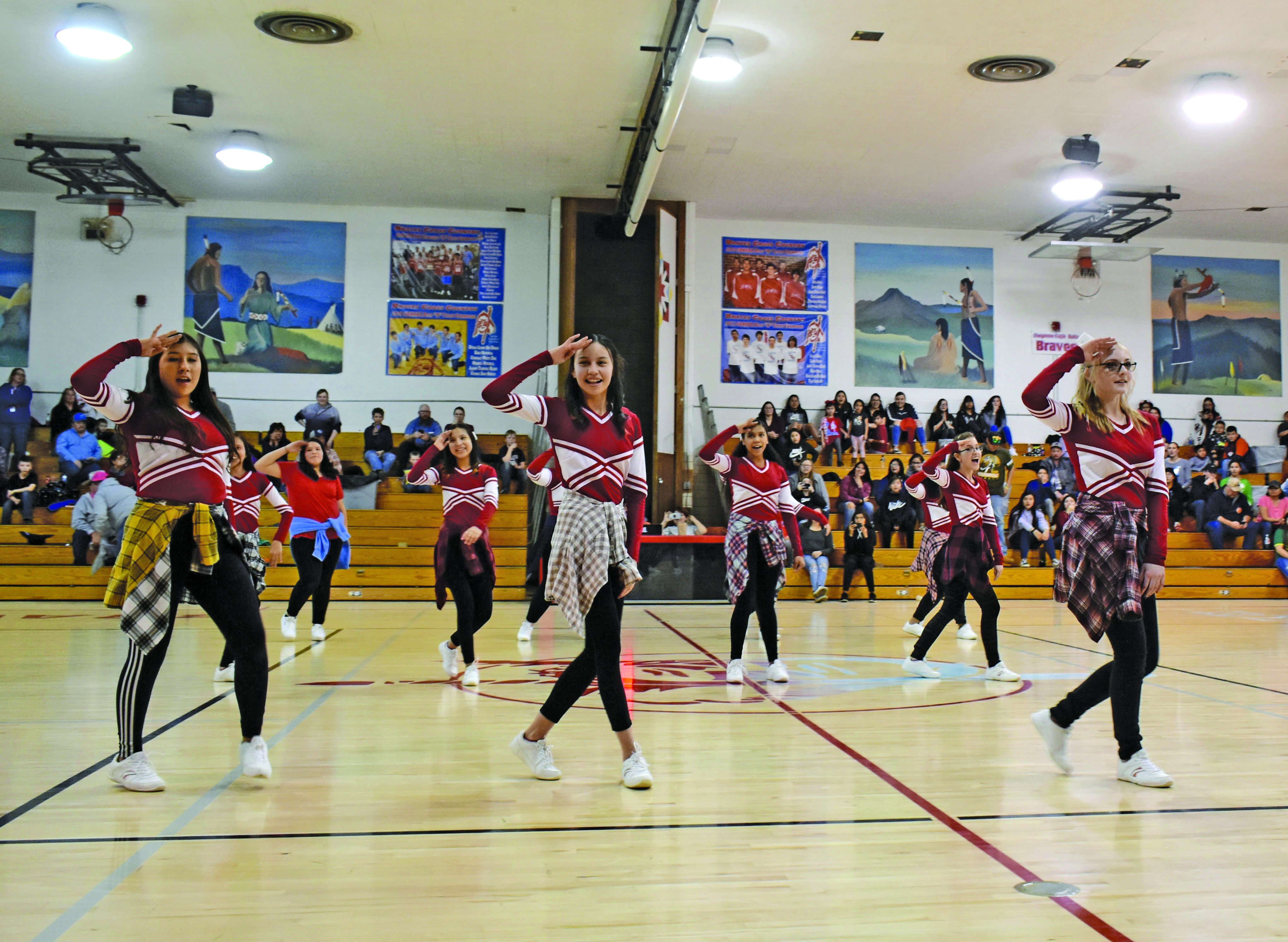