A total of 5159 tests have been conducted, with 5079 negative and 80 positives (one more since yesterday). There are 19 active cases of Covid-19 on Cheyenne River, with two individuals referred out for care. CRST Chairman Harold Frazier described the two individuals as “stable. There are 3625 test kits available at the Cheyenne River Health Center, reported the chairman.

Here is break down of cases: 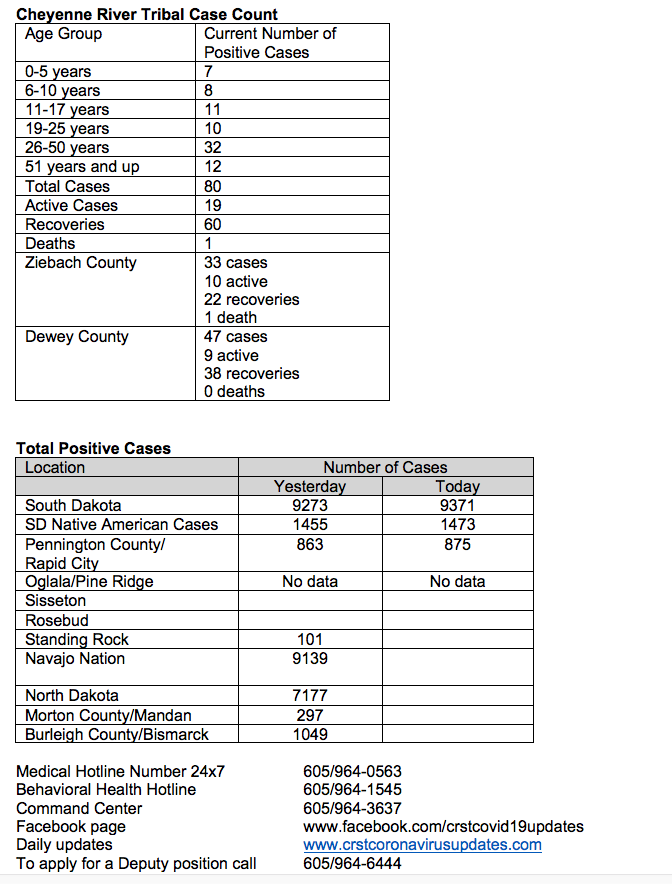 The Chairman reminded people of open testing which starting tomorrow.

A caller mentioned that the USPS has not been delivering mail to Bridger and Takini addresses. The caller wondered if they could get mail boxes by the Takini C-store. The Chairman said that he had just heard about this and thought it was a great idea, saying that he will get a hold of the USPS and ask about it.

Another caller recommended the idea that a week before school started if there could be a 2 to 3-day lock down to stop the spread and to identify any carriers. Chairman Frazier said he would take this to the Taskforce and see if it is doable or would have any effect.

Radio host Dr. Loescher said there was a protest going on in the parking lot of KIPI and wondered if the Chairman wanted to talk to any of them. The Chairman replied, “I know their demands.” He said that they want to have all the Cares Act money distributed. The Chairman clarified that this is not allowed according to auditors and if this was done the Tribe would have to pay that money back.

During the livestream of Council sessions, discussion was conducted about whether or the Tribe could give tribal members $500 a month for the next five months. Initially there were no guidelines on the money but as of July 8, the Treasury Department set out strict rules on how the money could be used. The Council is working to do this right.

There was a question about the latest Council action, and how it would affect bars and businesses. The Chairman reminded listeners that the answer is online in the response plan and that alcohol is only to be served from 11 a.m to 3 p.m.

A caller asked about seeing the Highway Patrol on the Reservation and was wondering why and if it was allowed. Chairman Frazier said that according to the Chief of Police, the Highway Patrol is here to reconstruct an accident and were brought in by the local police because they are not trained on this. The Chief is using this as a training opportunity.

There was a question about maintaining outdoor spaces, seeing if there was a cleanup day if people want to help with that. The Chairman mentioned that he reported on that yesterday, stating that on Monday, Aug. 10, the spring clean-up team would be at Bridger and Takini. After that they would be going to Cherry Creek before finishing Red Scaffold. Chairman Frazier said that a lot depended on the weather and equipment. He also said that according to reports he has gotten, local parks should still be maintained.

Someone asked that since the travel permits were gone, if people from Rapid City were now allowed to come onto the Reservation. The Chairman said that if people are coming from a hot spot they are recommended to quarantine. He asked listeners to continue to practice the CDC guidelines: avoid large groups, keep social distancing, wear masks, and to wash hands.

He clarified that with the lifting of travel permits, the Council is not saying everything is fine, stating “We still have to keep our guard up.”

A listener asked about the job description of the Foot Patrol. The Chairman said that first the person could not be in a vulnerable category for health concerns and could meet the physical demands in the heat. It is tough for Quarantine deputies, hard physically and that they are orientated on the CDC guidelines to keep themselves and their families safe. There are a lot of young veterans, some with prior Law Enforcement training doing the job.

Dr. Loescher thanked them, all the eeterans, and law enforcement personnel.

There was a question about if someone went to the bike rally in Sturgis if they are required to quarantine. Chairman Frazier reminded listeners to look at the policies on the website, that it is all there. He said that if people go to the rally, Faith, or somewhere else, to try and self-quarantine, to take on the responsibility and do the right thing. He asked that people make good choices.

A listener asked if there was a Covid case count by community yet. The Chairman admitted that “we’re not quite there yet.” He said he is going to reach out to the taskforce and medical team to get it hammered out, hopefully in the next few days.

There was a question regarding the showers out at the powwow grounds, if they were open. The Chairman said that a while back they were looking at repairing the showers but he has not heard anything. He knows they were hiring more employees, especially more women to monitor the female showers.

Dr. Loescher asked a follow-up question about if the Tribe was reaching out to their vulnerable communities. The Chairman said that they are doing plenty to help but admitted that they can try to do better, saying that he often prays for those in greater need. He said that the shelter staff is doing good work, ensuring that there is laundry, showers, and other things available, to educate people on the CDC guidelines. The crew is reaching out the best way they know how, he said, and that they still keep trying to do better.

A caller from Iron Lightning had a suggestion concerning elections. He wondered why not have voting booths set up outside. The Chairman stated that they did have an election board, and that he would mention this to them today, saying it was a good idea. He reminded listeners the CRST Primary election will take place on Tuesday, Aug. 11.

The Chairman thanked listeners, and wished them a beautiful day, hoped they stayed positive and patient so that it would be easier to get by, and was looking to visiting with people tomorrow.