A total of 5510 tests have been conducted, with 5421 negative and 89 positives, eight more since yesterday. There are 19 are active cases, said CRST Chairman Harold Frazier in his daily address today. There are three current hospital admissions and there are five open beds in the Eagle Butte IHS hospital. Two cases have been referred out and are stable. There are 3534 test kits available. 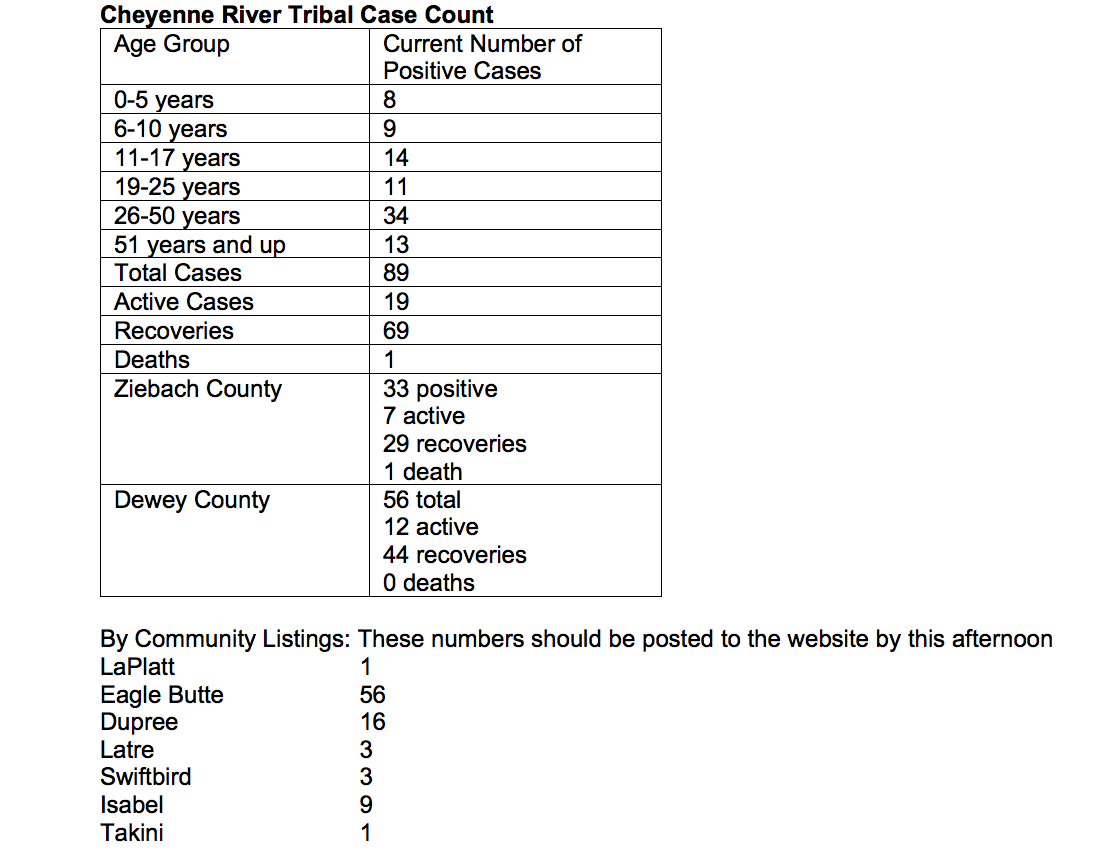 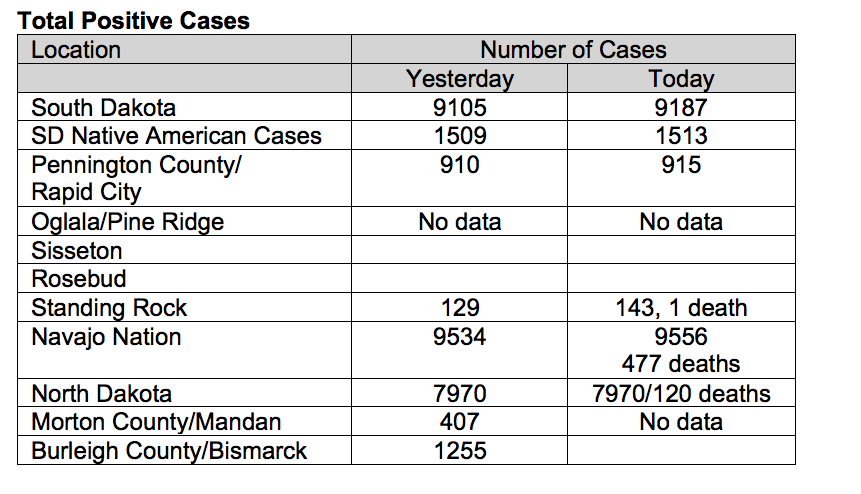 The Chairman said that of the 89 total cases, that 40 of them have been asymptomatic, mentioning that a person could be a carrier and spread this further. Nearly half of the cases have not had symptoms, which shows the importance of mass testing, so that people can know and not put family at risk.

There was a question about the fact that a bulk of the cases being travel related, and asking if they were coming from a specific area. The Chairman said that no, the bulk of cases have not been from travel.

Before July 31 there were six cases related to travel, three had permits and three did not.

Since August 1 there has been six cases. The chairman said that he did not have any data of any specific places these people had traveled from. It is important to keep track of these things and be supported by the numbers, the Chairman clarified.

Frazier then pivoted and mentioned that in the eight new cases since, four of them were school aged children and that if they had not been tested. it could have affected schools.

Chairman Frazier said that it is important to get tested and make sure you do or do not have it. He went on to add that of the 89 cases so far, 12 have been travel related, 1 unknown, but that the bulk of the cases, 76, have been with contact with people who have traveled.

Pointing out that some of the numbers have come from households getting sick, he mentioned that when there is high poverty that it is tough. When 8 to 12 people share a two-bedroom house and need to quarantine, isolating is not always possible.

Once someone in a family is positive, spread of infection occurs in a home.

The Chairman stated that he is very glad that there has only been one death from this. Dr. Loescher clarified that there are no travel permits and that the Chairman recommends no travel unless essential. Chairman Frazier said yes, and that if you do travel to follow the CDC guidelines to keep the numbers low, especially since the Tribe is borderline Level 4.

Dr. Loescher said that now is not the time to give up, that the challenge is still there to keep the numbers down, so people should strictly follow the CDC guidelines: wear a mask, be socially distant, avoid crowds, and to wash hands frequently.

A caller asked about the $500 dollar disbursement from the Cares Act money. The Chairman said that he hopes to have a number to call tomorrow, that they are getting forms developed so that people can apply for the money. It should be up on the website tomorrow or by Monday for sure. They are planning to take information over the phone so that people do not have to come out to the office. They work everyday to make sure people are taken care of.

A caller than made a shoutout to the Chairman and the Council for taking care of the people.

A caller asked if there were routine follow ups with those that have recovered, to make sure that they were doing well. Chairman Frazier admitted that while they did back in March, that he hasn’t really asked about that. He said that he would find out.

Dr. Loescher said that there was a rumor that the Chairman wanted to start school immediately in the classrooms.

The Chairman said “I don’t think so. I have a grandson in Rapid City, and back in March I told my daughter you know what’s best and she home schooled him.”

He clarified that he would never mandate this and does not support the idea. This is something the Council has talked about. The information is there in the Covid response plan on Facebook, especially for Level 3. The BIA said that they would follow the Tribe’s plan and that their schools and Grant schools are all planning to go virtual. Local school boards would make the decisions, and hopefully give students the option.

Another Cares Act question was asked, asking if Heads of Households need to produce receipts. The Chairman said that receipts have been stressed and that he thought the Tribe might just pay people’s utilities themselves but that he would know more tomorrow. He stated that receipts would be important for the audit.

A caller asked if Tribal Courts were considered essential, since there are people with cases pending, and was there any timeline for them to be opened? Chairman Frazier said that the courts are open and that they have been doing cases over the phone, moving things forward. He said that if you are concerned and haven’t heard anything to give them a call. While they are not open to the public the people are working.

A caller asked if the checkpoints could start checking IDs as they had heard that some people have been using other people’s names. The Chairman admitted that is happening, they are aware of it and are even aware of who is doing it, stating “That is the way some people roll.” He said that he would bring it up but that the safety of the checkpoint volunteers is important, including not handing things back and forth.

There was a question if there would be a speed limit reduction in LaPlant since there is a new C-Store opening up. The Chairman said that the new store would be opening up at 9 a.m. tomorrow and he “hoped to buy the first doughnut and cup of coffee.” He thanked people for their patience with the store and said there will be a new speed limit, stating that signs will be up and that the Chief of Police assured him that it will be enforced.

The Chairman thanked listeners, asked them to stay strong in their prayers. He acknowledged that times are tough and said that people need to make sacrifices so others can live healthy.