In a show of force, Cheyenne River Sioux Tribal Chairman Frazier led a charge of 30 riders on horseback before walking into the opening ceremony of the Honoring the Spirit: Commemorating the 150th Anniversary of the 1868 Treaty Signing.

Staff bearers and bonnet wearers of Cheyenne River followed Chairman Frazier into the event tent that was filled to capacity. Immediately, chairmen from other Great Sioux Nation tribes rose and stood next to him.

The master of ceremonies introduced Chairman Frazier and emphasized that each tribal leader was given three minutes to speak.

“We rode 350 miles to be here today and we’re going to talk as long as we want. What’s very upsetting is to come all this way on horse… where is Trump? Where is Zinke? Where are the decision makers of the federal government?” said Chairman Frazier.

A thunderous applause, lili’s and akeesha’s echoed throughout the tent.

Chairman Frazier continued his speech and spoke about life before the treaty, what it meant to live under natural and spiritual laws, and being guided by the canupa (the sacred pipe). Frazier said that man-made laws were detrimental to the Lakota people.

“Look at how we live. The poorest counties in the United States are in our treaty lands. They [federal government] should be ashamed of themselves,” said Chairman Frazier.

Other tribal leaders spoke and shared messages about the importance of solidarity with each other and honoring the treaties. They also paid homage to the original treaty signers and spoke about the struggles and burdens they must have gone through, and reminded people to honor that legacy.

After their speeches the chairmen and tribal leaders gathered outside the tent where numerous media outlets took photos, shook their hands, and asked questions.

On Sunday afternoon, WWII veteran and Cheyenne River tribal member, Marcella LeBeau spoke to the youth who were in attendance, including students from CRST. 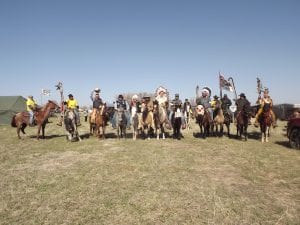 Thousands were camped in a large tribal encampment where events took place that were not part of the official NPS schedule. These included singing, dancing, inipi, sunrise, and pipe ceremonies, classroom instruction, and treaty meetings.

Many tipis and tents were set up by families, and several tribes set up kitchens and catering services.

A traditional council lodge was erected in the encampment and impromptu horse racing occurred when different tribes challenged one another.

People from across the nation came by horse, some walked, and some ran to the camp to raise awareness about native rights and issues.

As in the old days, the camps were largely self-sufficient, and medical services and food were provided and operated by the tribes themselves.

A unifying message was echoed throughout the camp over the weekend, “We are still here.”