Census Results: What it means for South Dakota 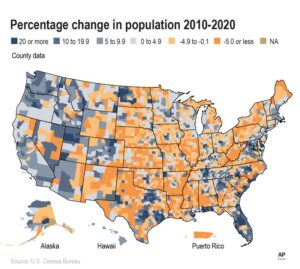 PHOTO COURTESY OF U.S. CENSUS BUREAU The map above shows the population increase after the 2020 Census.

The 2020 decennial census was the most difficult one in recent memory. Challenges from the COVID-19 pandemic, natural disasters, and decisions made by the Trump administration combined to delay operations and extend the count’s schedule. The difficulties had a particular impact on Hard to Count populations, including parts of South Dakota.

Rural, Hard to Count, and communities of color have been undercounted in the past. The Census Bureau will know by next year whether or not it did its job in counting every U.S. resident despite the insurmountable obstacles it faced.

However, leaders in South Dakota that already know that the census has an undercount among the Indigenous nations.

Although South Dakota did not gain or lose a congressional seat, the state’s population growth over the past ten years will lead to new legislative boundaries. Each legislative district must contain approximately the same number of people. Therefore, the legislative power will shift to the cities in South Dakota.

The Most Difficult Census in Recent Memory

“In South Dakota, we had an 8.4% increase from the 2010 census,” said Dew Bad Warrior, a community organizer who did census outreach and education. “But I attribute the increase to all of the outreach that we were able to do in the community by being able to go across the reservation and count our relatives, share how it impacts all the different programs, and explain how it relates back to our reservation. Although that may seem like a success, we didn’t get all of our relatives counted.”

Bad Warrior stated that some did want to participate in the census due to the historical distrust of the federal government. Many wanted to know why it was necessary to provide their information and what exactly was going to be done with it.

Also, some had the belief that enrollment information for the tribe is transferred automatically to the U.S. Census Bureau.

“A lot of people think that because they’re enrolled in the tribe that they are counted in the U.S Census,’’ said Bad Warrior. “But the tribe and the census don’t share that data with each other. It is two different counts.”

Who Lost, Who Gained

The new detailed population data from the 2020 census is the blueprint to redraw 429 U.S. House districts in 44 states and 7,383 state legislative districts across the U.S. The official goal is to ensure each district has roughly the same number of people.

While states are now on the clock to draw new legislative maps, the U.S. Census Bureau has released more detailed population data this month that goes beyond redistricting and shuffling congressional seating. The newly released data will be used to guide more than $1.5 trillion in federal spending every year for the next ten years.

During the census count among the Indigenous population in South Dakota, Bad Warrior and others explained to those on the reservations how the census data is used in determining federal funding for Indigenous nations. Now, redistricting in South Dakota will shape where funding is allocated.

California, Colorado, Michigan and Montana have independent commissions that will determine new legislative boundaries void of partisanship or through bi-partisan participation.

Lawmakers have expressed that cities and the reservations will be challenging as they are required by Federal law to ensure that marginalized racial groups receive equitable representation in state government. In Sioux Falls, its Black, Asian and Hispanic populations have nearly doubled in the last decade. Meade and Pennington Counties had a combined increase of 13,642 people.

Despite the delayed Census Bureau’s report, lawmakers are planning to have boundaries drafted by October and they will hold a series of public hearings across the state. By State law they have a December 1 deadline to approve the new districts.

The population growth in South Dakota’s cities with an increased diversity is in line with the national trend.

According to the population data released by the Census Bureau this month, the U.S. became more diverse with more migration to urban areas over the past 10 ten years. There has also been migration to the South and West while the population dropped in the Midwest and Northeast.

The white population decreased from 63.7% in 2010 to 57.8% in 2020 for the first time in history. Although falling birth rates among white women compared with Hispanic and Asian women is a contributing factor, the shift to multiracial identities has led some demographers to point out that the white population is not actually shrinking. The number of people who identified as belonging to two or more races was 9 million in 2010 but jumped to 33.8 million in 2020. Multiracial people now account for 10% of the U.S. population.

Among people younger than 18, non-Hispanic whites dropped from 53.5% to 47.3% during the past 10 years to the point where there is no majority racial or ethnic group in that age group.

The Power in Data

With the release of the census data, we are entering a season of gerrymandering in which lawmakers throughout the country will draw new voting district lines that will favor their party to win upcoming elections.

After the 2010 census, Republicans who controlled redistricting in far more states than Democrats drew maps that gave them a greater political advantage in more states than either party had in the past 50 years, according to a new Associated Press (AP) analysis.

Now, the GOP needs to gain five seats to take control of the U.S. House in the 2022 elections which can get accomplished through gerrymandering. Republicans will dominate the redistricting process in 20 states which accounts for 187 U.S. House seats, including the growing states of Texas, Florida, Georgia and North Carolina, where the legislature fully controls how the new electoral lines are going to be drawn.

However, such a feat may not be easy as it was in 2010. There are going to be lawsuits challenging redistricting maps in many states. Also, Republicans won’t hold as much power as they did in 2010 in some key states.

Courts ordered multiple changes to the pro-GOP maps drawn in North Carolina after the 2010 census. Lawmakers have recently voted not to use election or racial data in redistricting.

Democrats will control redistricting in eight states accounting for 75 seats, including New York and Illinois. The loss of a seat in each state gives them an opening to push out Republican incumbents.

In 16 other states accounting for 167 U.S. House seats, districts will be drawn either by independent commissions or bipartisan groups with legislative chambers led by one party and governors of another. Six states have just one U.S. House seat, so there are no district lines to be drawn.

While the Florida Constitution prohibits drawing districts to favor a political party, Republican leaders may try to take advantage of its new population growth since Florida has gained a U.S. House seat when redrawing the district lines.

After having full GOP control following the 2010 census, Republican-led legislatures will be paired with Democratic governors in Pennsylvania and Wisconsin. A voter-approved citizens commission in Michigan will oversee redistricting instead of lawmakers and the governor. In Ohio, voter-approved redistricting reforms will require majority Republicans to gain the support of minority Democrats for the new district maps.

While no one could predict that a global pandemic would coincide with the mobilization of the census, Dew Bad Warrior outlined lessons learned in 2020 that will need to be implemented at least two years prior to the next census among the Indigenous population in order to have an accurate count.

According to Bad Warrior, it all begins with messaging that community organizers distribute early on in the process by explaining how the census impacts that funding for transportation, housing, health care, and so much more. This important messaging needs the buy-in from tribal leaders in each Indigenous nation to assist in educating the people and the impact the census has on funding and to eliminate distrust about the process.

“It’s aggregated data which means that their privacy and data are protected,” said Bad Warrior. “It is important to stress that among our native people due to our natural distrust of the federal government especially during the last administration. That is a key reason that a lot of people did not participate in the census.”

Bad Warrior also discovered that another reason for the distrust was the misconception that participating in the census could impact housing. Many believed that if they offered data about the individuals residing in their household and the employment and income of those individuals then that would compromise their housing benefits. However, it goes back to the fact that the information collected through the census is aggregated and individual data is not shared with other entities and agencies. Bad Warrior sees that as misinformation that needs to be addressed early on during the next census.

The tribal leaders are instrumental in ensuring that each member has a census form placed in their hands. “If you had a P.O box number, you didn’t get a form sent to you,” said Bad Warrior. “They only hand-delivered them to the doors. During the pandemic, they just dropped the forms off at the door. Due to the South Dakota weather, many forms flew off the doors. So, every resident on reservations did not get a form.”

However, if you were an Indigenous person who did not live on the reservation and had a residence that was geo-coded by the post office then you received a form that was mailed to you and placed in your mailbox. Bad Warrior pointed out that there needs to be an effort to geo-code every home on each reservation so that each household receives a census ID number as well as a postal-delivered form. Until that happens, community organizations and tribal leaders need to ensure that a form is placed in the hands of each person on every reservation and not just dropped off at their door.

The mode of messaging that works well among Indigenous people, especially the elders, is radio. However, the most effective means to disburse census information is through the schools and programs, such as Meals on Wheels, WIC, and Headstart, because the workers in these programs are trusted voices in the Indigenous community, according to Bad Warrior. When the pandemic shut down access to programs, the newspaper became the means to educate the Indigenous community about the census; but that was limited since everyone did not have access to a newspaper. Bad Warrior emphasized that direct personal contact was the best way to effectively reach people and successfully encourage them to participate in the census.

For the homeless, Bad Warrior stated that the effort to count them has to go beyond doing a headcount for one day. More census workers are needed to gather their individual data and manually enter it.

To truly prepare for the next census and ensure that as many Indigenous people are counted, especially the elders and those who are homeless, the mobilization has to cover a significant amount of territory on and off reservations using trusted voices and leadership through personal and direct contact offering education to dispel misconceptions about the census.