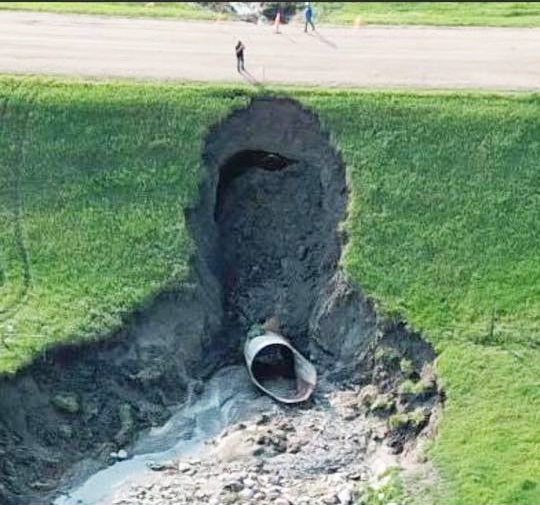 SUBMITTED PHOTO
Failing road infrastructure such Bureau of Indian Affairs Route 7 (pictured), is a common sight on Cheyenne River. The CRST Department of Transportation maintains 300 miles of roads on the reservation and Census impacts part of the Tribe’s transportation funding. Since the photo was taken last year, the route completely washed out and a detour was created by the Tribal DOT.

The Census count is very important to the funding of maintenance, repair and new construction of roads on the Cheyenne River Sioux Tribe Reservation. According to Dakota Longbrake, CRST Director of Transportation, Cheyenne River receives Federal funding for transportation through the Department of Housing and Urban Development, which uses Census data and data from the American Community Survey to calculate the funding formula.

The CRST DOT is responsible 300 miles of gravel BIA and Tribal roads. Road work on Cheyenne River includes maintenance such as blading, replacing failing culverts, mowing ditches to keep snow from piling up on the roads, sign work and bridge repairs.

Population data has a direct impact on funding for all roads on CRST.

These projects are on hold because 2020 funding has been allocated to storm damages from 2019 flooding.

Cheyenne River was undercounted in the 2010 and 2000 Censuses, said Dew Bad Warrior, South Dakota Tribal Partnership Specialist for the Census. According to Bad Warrior, a full Census count will “get better roads, more housing, justify a lot more grants” and said it’s important that “tribes aren’t undercounted for the next Census because it really impacts us. It impacts every single person.”

Longbrake is passionate about funding roads on CRST and in Indian Country as a whole. He and other tribal transportation leaders have been working for years to advocate for tribes and to articulate the different needs between urban tribes with higher membership and more rural tribes with fewer people but many more miles of roads.

According to Longbrake, that population number comes from Census data and the American Community Survey.

“One bad thing about the tribal community as a whole, across the nation, is there’s 576 tribes and we’re always lumped together. What’s good for one tribe, more than likely is probably bad for the other, especially when it comes to [transportation] formulas,” Longbrake said.

According to the American Community Survey (www.census.gov/tribal/) the population of Cheyenne River in 2018 was 8,556.

The American Community Survey is a program of the Census Bureau. The survey is sent to a set of random participants, about 3.5 million homes every month, every year.

Between the two decennial censuses, the ACS reaches out to one in nine households every year. The ACS asks about topics not covered in the decennial Census, such as education, transportation, internet access and employment.

“The biggest downfall to this survey is after four attempts, if they don’t get a hold of the household, it’s counted as a zero. The biggest downfall that we don’t like as a tribe or transportation official, is that zero count. It’s very important that they get a hold of somebody when they do this HUD count, as far as transportation goes,” said Longbrake.

Nationally, Longbrake and CRST Chairman Frazier have worked diligently to lobby for changes in the transportation funding formula.

“They’re in the process right now doing a new highway bill. So we’ve been advocating for tribes as part of this highway bill and Tribal Transportation Program. The Chairman made a big push the last couple of years so we’ve been all over the country trying to deal with large land-based tribes to help in DC to persuade and lobby to get more money into the TTP, the Tribal Transportation program. The Senate passed a version of it last year and the House is working on a version of it right now,” said Longbrake.

The Senate Bill (S2302), America’s Transportation Infrastructure Act of 2019, was approved by the Senate Environment and Public Works Committee in July 2019 and moved to the Senate. The House bill will almost double the $287 billion amount proposed in the Senate and raise the price tag to $494 billion. The “Investing in a New Vision for the Environment and Surface Transportation in America Act’’ or the  INVEST in America Act, was approved by the House Transportation and Infrastructure Committee on June 18 and moves to full House consideration.

Beginning June 15, Census workers began the process of dropping off Census packets to each household on the reservation. Workers wear PPE and have no-contact drop off.

The Four Bands Community Center is running a Census Challenge from now through July 10. Five prizes will be given away each week. To enter, go to 2020census.gov and click “Respond” to begin the questionnaire. After you’ve completed the nine census questions, take a screenshot of the confirmation message. Email the screenshot to cindy@fourbands.org.

Homes without a street address

If you receive your mail at a P.O. box or describe where you live as “first house past the bridge,” a Census worker will deliver a Census packet to you. In order to fill out the Census you need to know your physical address. If you need that information, please call Beau Maynard at 605-964-2005. 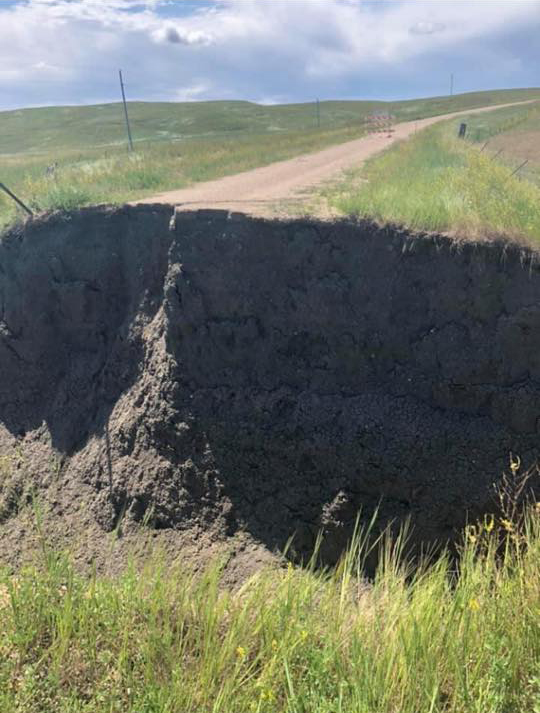 SUBMITTED PHOTO
BIA Route 9 in Armstrong County washed out last year due to flooding and is still closed.

Potential COVID-19 Exposure at Sitting Bull Stampede.BREAKING: Over 50% of positive individuals on CRST are under the age of 18Mount Rushmore Fourth of July underscore cultural fault lines
You have 2 more free access views left