Catfight between Dupree and McIntosh Tigers

It was a Tiger showdown as the Dupree Tigers faced off with the McIntosh Tigers on Thursday in girls varsity volleyball action. Dupree won in three straight sets with scores, 25-12, 25-20 and 25-13, to create a two-win streak while extending the win column to five wins and two losses so far this season.

The scoring was highlighted with Kennedy McLellan and Kadynse Buffalo each providing eight aces during their time placing the ball into play. McKenna Dupris led the kills with nine, followed by Buffalo with five kills, and McLellan and Chessa McDaniel with 3 kills, providing further offensive action.

Defensively Dupris, led with five blocks and Shada Selby following with one of her own. The Tigers rounded out leg digs with McDaniel’s 14, and McLellan and Buffalo’s nine successful digs.

Dupree played against Harding County last night, results from the game were not available as of press time.

DHS senior Chessa McDaniel gets low and makes a successful pass to the setter. EAGLE PHOTO BY KATHY OLSEN 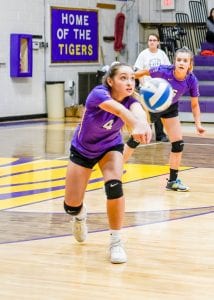 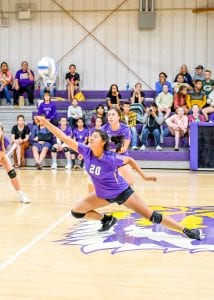 Senior McKenna Dupris reaches for a save to keep the ball in play during the game against McIntosh. EAGLE PHOTO BY KATHY OLSEN 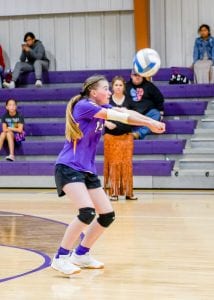