Canupa given to CRST Tribal Council

On the floor, in the middle of the packed room, Lafferty placed three items: a whip, a whistle, and a  canupa. As he picked up each item, he explained how each one played a unique and vital role in traditional leadership and governing in the days when the people were known as Pte Oyate — the Buffalo Nation.

The whip, he said, was used by a whipman to enforce traditional law and order, and to protect the people; the whistle was used to by the provider of the family to make a spiritual connection with the animals so that they would make themselves available throughout the year as a food resource; the canupa was important in spirituality and used to guide the oyate through turbulent times.

Lastly, Lafferty held up a bundle wrapped in red cloth, and explained that it was a gift that he brought to the tribal council, but before he presented it, he would talk about its meaning. He then requested Chairman Frazier to ask the Sergeant At Arms to collect every council representatives’ phone to ensure 100% attention from each official. While most council representatives voluntarily gave up their phone, some did not.

Lafferty then spoke about the canupa and said he understood some may not like or agree with what he was about to do.

Lafferty then explained that his goal was to share historical information about traditional Lakota leadership values, elders’ teachings on sacrificing for the good of the people, and leading the people with the canupa. Lafferty said some people say that they were not raised in the traditional way and do not know the teachings or the language. He said he was once in those shoes, but that he took it upon himself to learn, and that as adults, each council representative needs to as well, as they have chosen to fill Lakota leadership roles.

Lafferty then explained that he would share teachings with the representatives as though they were his age, because their behavior thus far did not show wisdom of older and wise leaders. This explanation Lafferty said, excluded elderly Councilman Ed Widow, who is the eldest official on council.

Last year, Lafferty ran for CRST Tribal Chairman and said he was told that there was no room for the canupa in politics. This is a lie, said Lafferty who pointed out that the Oglala, Rosebud, and Standing Rock tribal councils each have one. That the CRST Tribal Council has no canupa used in making decisions on behalf of the people is inconceivable, said Lafferty.

Cheyenne River is the center of Lakota spirituality as the sacred canupa from White Buffalo Calf Woman is located in Green Grass and protected by the Keeper of the Pipe Arvol Looking Horse; furthermore, the canupa is shown on the tribal flag, representing the people and governing IRA body, so why would any council representative who took it upon themselves to fill a traditional Lakota leadership role have any hesitation about the canupa, Lafferty asked.

“You iktomi’d the people in your district to vote for you to come and stand in representation of them. Now you represent in what we believe in, and before there was any denomination, Christianity or otherwise, there was just the Pte Oyate government, the canupa. We all stand under that pipe. If you are assimilated today, if you believe in Catholicism, Episcopalian, as an individual, that’s your right. But as a leader of a people that fly a flag that has canupa on there, if you’re a leader of our people, you’re going to stand in representation of this canupa,” said Lafferty.

He then explained that the canupa came with many responsibilities, including becoming good and respectful listeners. The day before, in an alleged incident, hot coffee was spilled on a council representative during a heated debate.

“The other day, we have two of our tribal chief representatives fighting with coffee here in a meeting that represents us people. Whether you’re fighting over your opinion or not, you should be just as serious a fighter over our Indian rights and our issues and all the threats that are coming at us,” said Lafferty.

Traditional form of leadership was two- part, and decisions were not hastily made; rather, were decided upon after consultation and discussion between men and women. Men would council amongst themselves and go home where information was shared with the women of the family, who in turn shared information amongst other women. It was here in this process that an important part of decision- making was discussed — the human side of each decision. For example, said Lafferty, it was the women who thought of the elderly, the expecting mother, and the young boys ready to become men.

“Everything we learned about caring for another human, we learned from our mothers and grandmas,” said Lafferty.

All details that were not thought of by the women and men were taken care of by the canupa.

“If you forget about one person, the prayer in the pipe remembers them. Somehow, what they need gets to them,” said Lafferty.

Expounding upon leadership teachings, Lafferty spoke about the need for leaders to sacrifice for the good of the people. This could be as simple as gathering timsila and preparing it for ceremony, such as the upcoming annual sundance at Arvol Looking Horse’s residence, said Lafferty, who then asked the council representatives to go the ceremony, to sit outside in the heat, visit with the people, and to perhaps even dance.

“That is proactive leadership!” said Lafferty.

Unsolved murders, mourning families, the lack of a tribal education code and traffic code, the need for improved law enforcement, water rights, the Keystone XL pipeline were other topics discussed by Lafferty.

Unwrapping the red bundle, Lafferty revealed the canupa he was gifting to the council — it was representative of the governing body, and because there is no tribal council building, there was no pipe bag. This, he said, would need to be remedied by the council themselves.

Lafferty said that it is possible to have the traditional government and IRA government work together and that it happened in the past when the two joined and helped pass the American Indian Religious Freedom Act of 1978.

“They worked together and the accomplished something great for all of us. So don’t ever think that there is no room in politics for a pipe,” said Lafferty.

Traditional leadership, especially under the canupa, entails certain values and a way of life that requires sacrifice, explained Lafferty.

“We all belong and believe under this pipe, and as a leader, if you prefer another denomination or spiritual belief, then you need to be a leader amongst that spiritual circle because as Lakotas, we believe in that pipe. And on that pipe, we don’t lie, we don’t cheat, we don’t steal, and we never take more than our share, and your family comes last, but they are the first ones to serve the people. As a leader, you are the first ones to have an empty pot in your lodge. You give up your allocation, you give up your personal business. If there is a grandma who is barely moving, go to her, see what her needs are, then advocate for her needs instead of advocating for non-tribal member white rancher needs,” said Lafferty.

Lafferty then explained that there is a movement among people who are unhappy with the way the tribal council has governed and conducted itself, and that a referendum vote could occur in November to make changes in representation.

“I’m giving you an opportunity today. I have a book, and I’m going to pass it on. In your chapter, are you guys going to be the saviors of our tribe and the next seven generations and utilize the canupa, get rid of the chaos and think like a strong forward mind? Or is your chapter going to be just this, what you’ve done today, your ongoing support of the genocide of your own people and the rubbing out of your own people?” asked Lafferty.

Before he began his canupa ceremony, Lafferty reflected upon himself and his frustration of the current state of affairs within the tribal council.

“I’m probably the worst person qualified to present this pipe, but I am really tired of all this. You guys got to grow up, you got to take responsibility. And if you’re going to iktomi the people to get in office, you better act as a Lakota leader and you better represent the people’s needs. This is serious business;, this is our life. As a leader, as a human being, as a person, if you want to represent us Lakotas, we believe in that canupa;, we make all our decisions based on that canupa,” said Lafferty.

He then filled the pipe with cisasa, everyone in the room stood up, and Representative Bob Walters sang a prayer song while Lafferty prayed with the pipe.

Afterward, he shared a “user plan” for the canupa — every representative will each keep the canupa for one month in between council sessions, and each morning in the early dawn when father sky and morning star talk to each other, the representative responsible will pray with the pipe asking for guidance and protection of the people.

At the end of the month, during the next tribal session, the canupa will pass to another representative who will do the same thing until all have carried the pipe.

Lafferty then performed the four directions song and the room erupted with voices of those who joined in the prayer song.

The time finally came when Lafferty approached each representative asking if they would represent the people equally, to serve the people in a respectful and honorable way, and to not fight against the people. Some questions he asked entirely in Lakota to certain representatives, while others he spoke in English.

Each time, Lafferty offered the canupa four times, and if a representative accepted the canupa and agreed to serve the people in these ways, their hands touched the canupa.

No one declined the canupa.

When he approached Council Representative Ed Widow, Lafferty did not ask him the questions, rather, he placed the pipe on his shoulder and thanked him for his leadership.

The first Council Representative to hold the canupa this upcoming month is RJ Lawrence. At the end of the month, Lafferty said he is going to ask what each representative did in their district for their constituents during that month.

“On our sacred pipe today, we see our leaders making a vow to represent all of us fairly, honestly, and truthfully. We witnessed this here today, and will follow this into the future and we’ll see. Because you can’t lie on this pipe, you can’t steal on this pipe, you can’t cheat, and you can’t deceive. Help us as a people to correct our behavior by correcting yours,” said Lafferty.

Joseph Lafferty hold up a traditional Lakota whip as he explains the important role of whipman. Lafferty presented the CRST Tribal Council with a canupa during Thursday’s session. Photo by Alaina Beautiful Bald Eagle 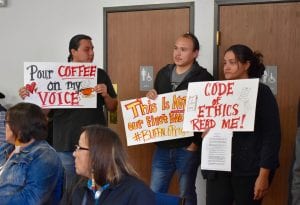 Making their voices heard, Alex Good Cane Milk, Joseph White Eyes, and Tasina Smith attend tribal council session with signs expressing disapproval of the CRST Buffalo Board and the behavior of some of the tribal council representatives. “We represent the youth. It doesn’t take being older or having a college degree to see corruption. The youth see it, they want change, they have spoken,” said Smith. Photo by Alaina Beautiful Bald Eagle