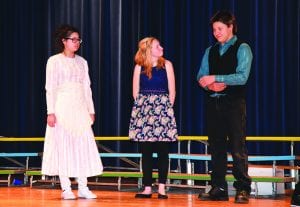 Life, played by Sakaiya Martin, the Girl, played by Hanna Updike, and Youth, played by Delvin Gripne, discuss what is so great about Life during a dress rehearsal. The students are members of the C-EB drama club and will compete in the South Dakota High School Activities Association region V one-act play competition on Wednesday, January 24.

In just under two weeks, the drama club at C-EB high school rehearsed for the presentation of Louise Bryant’s one-act morality play “The Game,” first performed in Provincetown, MA in 1916. Bryant was 21 when her play was written and presented.

C-EB’s actors will present the play in Pierre Wednesday, January 24 at the South Dakota High School Region V competition, rescheduled from its original January 22 time due to poor weather conditions in the southern regions of the state.

Starring in the play are Oliver Miner as Death, Sakaiya Martin as Life, Delvin Gripne as Youth, Hanna Updike as the Girl and Bobbi Mendoza is the stage manager.

Should the actors win in the competition, they will advance to the State competition in February.

This will be the second presentation of a one-act play for this group, who first presented a condensed version of Romeo and Juliet at the Lakota Nation Invitational competition in December.

Both new teachers to the school system, they have picked up where Cindy and Dale McCrae and then Scott Webster left off.

“Learning lines so they can focus on the acting,” is one of the most challenging aspects for the drama club, said Beckler after the troupe finished their dress rehearsal last Thursday.

Beckler said that C-EB will be competing against 6 schools in Pierre at the T.F. Riggs High School Theater.

“I’m excited to grow the drama program and see what we can do with it in years to come,” Beckler said of her and Elwess’s efforts and future endeavors.

The morality play the students will perform present Life and Death in a battle for the girl, who is contemplating suicide.  The battle includes wit and intellect, but is also dependent on chance as Life and Death role dice at different points of their battle.