Cheyenne-Eagle Butte Senior Oliver Miner is making waves in South Dakota’s  political circles and in Indian Country because he wants to increase Native American involvement in the democratic process at the tribal, state and national levels, he said in a recent interview.

Miner was selected to be member of the Gen Seven Tipi Raisers Native American Ambassadors and is currently studying how to fulfill the job or the duty of an ambassador. Being an ambassador means learning how to develop leadership and advocacy skills and inspire others to make a positive change in the whole country.

An ambassador is the highest ranked diplomat in the government and is mostly responsible for the embassy that represents the ambassador’s home country and is located in another country. Someone in that position has to believe in or think just like the people or the subject they are representing so they can articulate the desires and needs of the people.

The Gen Seven mission is to “convene, mobilize and empower Native and non-native young leaders; building relationships, bridging cultural gaps and providing the tools and resources necessary to bring awareness to pressing issues and make genuine changes in the world around us.” As a student Ambassador for youth in Indian Country, During his two-year term, Miner will attend two to three gatherings with other ambassadors to build bridges between cultures, develop leadership skills, plan and conduct community services, and participate in network and relationship building activities between native and non-native young leaders.

Miner also submitted a constitutional amendment to the SD state legislature to lower the age at which a person can run for State House Representative.

In order for Miner to accomplish passing the amendment, he has to get 45,000 signatures before November 5, 2019. Once Miner receives the proposed constitutional amendment from Attorney General Jason Ravnsborg, who has 60 days from the date it was submitted, which was April 17.

Ravnsborg reviews the proposal for proper wording and legal revision, said Miner. Once the amendment is returned to him, Miner said he can begin collecting the signatures to get the proposed amendment on the ballot in November 2020.

A simple majority vote from the voters would allow for the amendment to be adopted into the SD constitution. Miner wants to lower the age to at least eighteen so that more people such as himself would have a chance to change things for the better sooner.  The current age to run for office is 21 years old.

In addition to his appointment as an Ambassador and his efforts to add an amendment to the SD State Constitution, Miner has been awarded the Richard F. Kneip Outstanding Young Democrat Award, which was given to CRST member Ally Moran last year.

Miner was nominated by Karen Hall and the Pennington County Democrats. Hall’s nomination letter is below:

Nomination of Oliver Miner for the Kneip Award

I met the young person Pennington County is nominating for the Richard F. Kneip Award during the summer of 2016, when we were both attending a candidate training class given by the SDDP in Rapid City.  This person approached me at one of the breaks, struck up a conversation and, despite the fact that I am over 50 years older, this marvelous young person struck up a conversation with me, and we’ve been friends ever since.

This person is graduating this year from high school, went to prom and lives the life we all remember from our own high school years.  The difference, though, is that this young person is dedicated to progressive politics as well as to friends, school and the rest of home town life.  This young person has attended all the SDDP meetings I’ve been to and probably more, contributes to every meeting and isn’t afraid to stand up and make what may be unpopular points. At other events – powwows, Lakota Nation Invitational basketball tournament, Central States Fair, etc. – this person always seeks out the Democratic Party booth and helps as much as possible.  Last year, this person helped Alli Moran with her campaign for the legislature in District 28 and has attended the Young Elected Legislative Leaders (YELL) weekend in Pierre for the last two years.  This person will run for office someday and I’ve already committed to contributing to the campaign in any way I can, assuming I’m still around!  This person would love to work to change the state constitution to amend the age at which a citizen can run for the South Dakota House of Representatives from 21 to 18.

At SDDP’s March meeting in Oacoma, when we elected state party officers, Alli Moran nominated this person for state party vice chair.  It made me smile, because the party could do much, much worse than to have him serve in that capacity.  But when he rose to speak, instead of accepting Alli’s nomination he spent his time at the microphone urging us, as a political party, to engage young people in our politics, to welcome them into our ranks and to encourage them to become involved.  He looked around the room and delicately told us that we are an aging party that needs youthful ideas and youthful energy to keep us viable in South Dakota.  He’s right. Then he withdrew his name from consideration.

Would you have had the courage to do that at this person’s age?  He definitely has courage, he has commitment and he has presence. He’s articulate and committed.

As we move forward in Pennington County, we will enlist his help with strategies for attracting younger progressive people to our party, and we hope the state party itself will engage him in helping to recruit more young people.  He is truly an asset to all South Dakota Democrats, and one day, I wouldn’t be surprised to vote for him for Congress or even for the presidency of the United States.  He would do us proud.

Ladies and gentlemen of the South Dakota Democratic Party, I give you this year’s recipient of the Richard F. Kneip Award for Outstanding Young Democrat, Oliver Miner!

Miner represents the Seventh Generation of Lakota Youth who says that he is “working to make politics inclusive for Native people.” 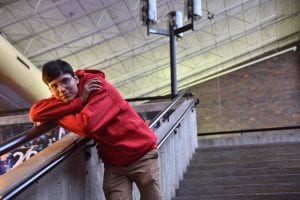 Senior Oliver Miner has a long track-record of being involved in politics. He is C-EB’s Student Council President, is actively involved in the SD democratic party, and is a recently appointed ambassador for the Gen Seven Ambassadors, which aim to unite young Native American leaders from different tribes with young non-native leaders from across the country. Miner hopes to motivate other Native American youth to be more involved in political affairs on the tribal, state and national levels. In this photo, Miner was one of several students who represented C-EB in the Business Plan Competition at the Lakota Nation Invitational. Photo by Jody Rust