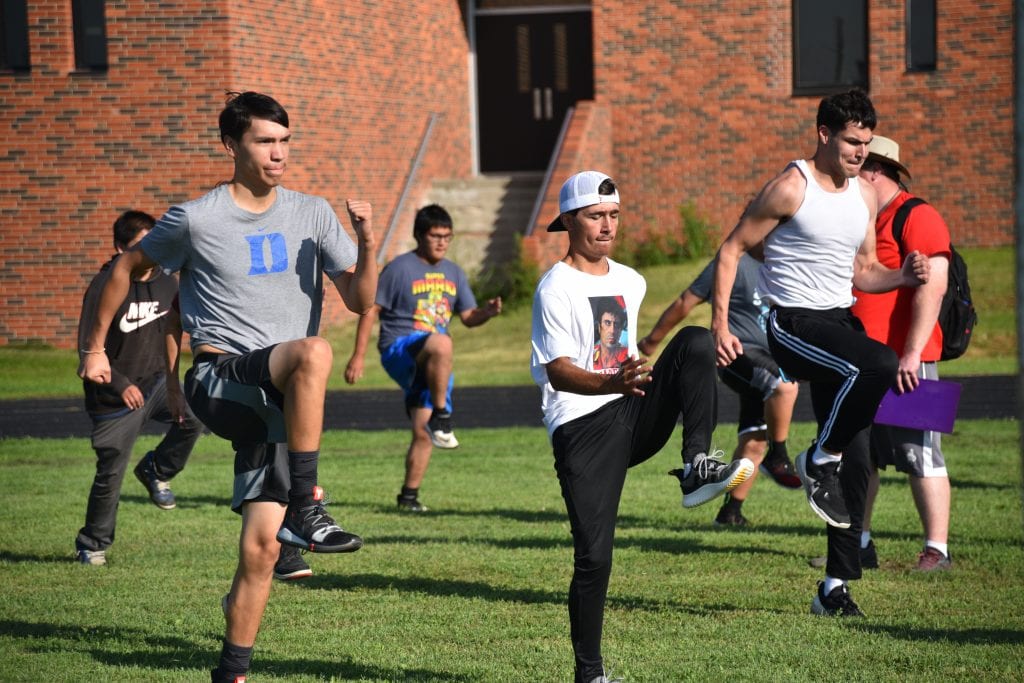 C-EB Seniors Max Lawrence, Payden Peterson and Lane Mousseaux do high knees during war-ups at their season’s first practice last Thursday. C-EB switched this year from playing in the SDHAA 11-man conference last year to the new All-Nations Conference and a 9-man game. 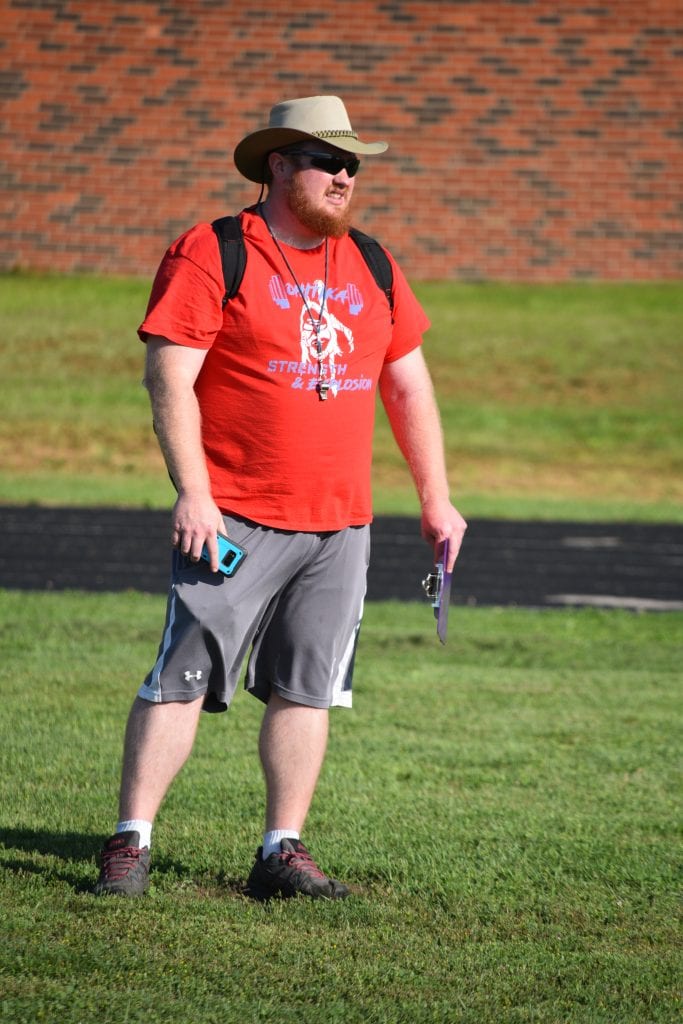 C-EB Head Coach Michael Scott oversees warm-up drills during the first practice before taking the team into the building to perform their preseason conditioning test.

Cheyenne-Eagle Butte’s football team gathered for their first practice, Thursday, August 15, preparing for a season that Senior Jordan Turning Heart said will be fun since he and his team will compete against their own people in the newly established All Nations Conference (ANC).

While most of the players exude a calm confident going into the new conference, Head Coach Michael Scott said the Braves will still face some traditionally tough teams, such as Red Cloud and Little Wound.

The Braves will play against Crazy Horse on September 6, Oelrich in week two for Homecoming, Red Cloud in week three, Tiopsa Zina in week four at Sioux Park in Rapid City during the Lakota Nation Invitational Fall weekend, Little Wound in week five and Takini in week six.

C-EB will vie for one of the two top seeds in the Western Conference to compete against the top two seeds from the Eastern Conference in the playoff for the championship to be held at the University of South Dakota’s Dakotadome in Vermillion.

Elwess said last year, he asked how many players would go out for football if they competed in an all-Native schedule, and more students raised their hands than those who voted to play in the South Dakota High School Athletic Association (SDHSAA) football conference schedule.

“It’ll be easier than last year, and we may have a chance to make the championship,” said Senior Rueben Tavai-Fiatoa at C-EB’s first official practice.

Senior Payden Peterson showed a “W” with his hands when asked how he thinks C-EB will perform in the ANC with a 9-man team.

This confidence was expressed by most of the players as they participated in their preseason conditioning test.

C-EB’s homecoming game will be on Thursday, September 12, at 6:00 p.m. against Oelrich. Coach Scott said the ANC was spearheaded by Lower Brule.

Del Bartels, on capjournal.com, reported Padro said in that meeting, “It is really about sparking interest.”

SDHSAA Board Chair Brian Maher asked Padro what the organization could do to help make the conference a reality, to which Padro replied, “Make a weekend for the All Nations end of season tournament,” and generate “revenue for wherever we host it.”

By spring 2019, the vision of the ANC conference was established and approved.

Participating schools signed up for what Coach Scott said would be a two-year commitment, and that the 9-man program at the high school makes junior high movement into high school football easier.

In previous years, the junior high football team would play a 9-man defense against other junior high teams that had only 9-man football, and an eleven-man offense so they would understand how an 11-man offense works.

Now, junior high can play 9-man offense and defense and be prepared for the high school team.

As the 2019 season revs up, C-EB players are counting on pounding their way to a long-sought championship on the football field.