C-EB charter bus catches fire, no students on board at time of incident

PHOTO FROM C-EB SCHOOL FACEBOOK PAGE
A photo of the bus before the fire. 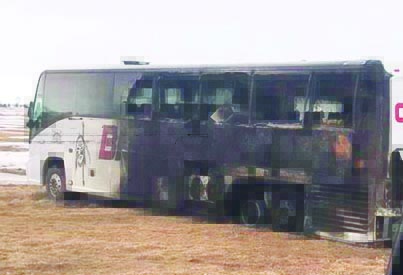 PHOTO FROM JESS KECKLER FACEBOOK PAGE
A photo of the bus after the fire.

According to the Faulk County Sheriff’s Office, a call came in after smoke was observed coming from the bus, and by the time the Faulkton Fire Department responded, the bus was engulfed in flames.

C-EB Athletic Director Allen Benoist stated that that four days prior, the bus was used to  transport the C-EB boys basketball team and cheerleaders to Millbank for a game on Friday, February 28, and on the way home, the vehicle broke down.

School Transportation Director Harley Morgan called the incident “a blessing in disguise” because the bus driver made a stop in Gettysburg when he noticed a smell coming from the vehicle.

Upon inspecting the exterior, the driver noticed that the tires and tire bearings were hot, said Morgan. The driver then made the decision to request another bus to safely transport the students and chaperones back to Eagle Butte.

“Who knows what could’ve happened if the bus driver didn’t notice the smell? He pulled over and did the right thing. It’s a bad deal that the school lost the bus, but this was really a blessing in a way,” said Morgan.

Calls to Foreman were not returned by press time.

The official from the Faulk County Sheriff’s Office would not speculate as to what may have sparked the fire, only saying he believe that the vehicle was a total loss by the time the flames were extinguished.

Morgan stated that he did not know if the bus had insurance but said that “the government is self-insured”. He also stated that there would be more information available once he meets with BIE officials and receives official reports of the incident within the next few weeks.

History behind the bus

The charter bus was used when it was purchased in 2014 for $300,000.00 with TECA funding that was awarded in 2013 under the Tribal Education annual allocation of funds, said TECA Director Kimberly Traversie-Colliflower.

The bus, a 2009 model, was eventually gifted to the Bureau of Indian Education from the Cheyenne River Sioux Tribe.