A Wreath Laying Ceremony took place at the Capitol Lake Monument, followed by a memorial service at the Madison Avenue Church of Christ.

Over sixty fallen officers were honored during roll call, including Officer Bruguier, a 14-year veteran of the CRST Police Department, who passed away on October 9, 2010.

Representing his father was Ethan Bruguier, who was escorted by City of Eagle Butte Chief of Police Norman Schuler and city Officer Amber Cooper.

“Merrill gave his life and my son was left without his father, who was just nine years old when he passed away. Norman Schuler has escorted every year and is committed to my son. Sometimes he is the only one who shows up,” said Memory Cook, Ethan’s mother.

Cook said she and Ethan are planning to participate in an annual memorial ride for fallen law enforcement officers from all around the state.

“We are trying to keep the memories of these fallen officers alive. Hopefully more people take a little more interest in it,” said Cook. 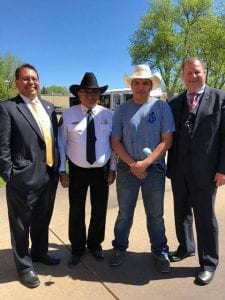