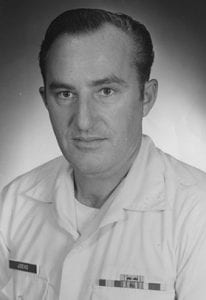 Private family services will be held Monday, October 14, 2019 at the Furness Funeral Home in Clark with burial following in the Lorinda Cemetery at Henry.

Boyd Ernest Joens was born at Dupree on November 23, 1939, the son of Glen and Alvena (Blattner) Joens. Boyd was raised on a ranch 7 miles north of Eagle Butte. He attended Eagle Butte School and worked for area farmers around Eagle Butte.

Boyd enlisted into the United States Air Force in September of 1961.  He served his country honorably for nearly the next 30 years, living in Maryland, Texas, Hawaii, and in Germany.

On December 26, 1966 he was united in marriage to Coral Schad at Eagle Butte.  After his retirement from the Air Force he taught electronics at the Multi District and the Lake Area Vo-Tech in Watertown.  They retired to a farm near Henry.

In his free moments he thoroughly enjoyed reading, fishing, watching football & NASCAR.  Leading and driving in the Antiques Tractor Parade at Potato Day was a highlight for him as he also enjoyed being outdoors, looking at wildlife, being a weather spotter, gardening, attending rodeos,  and spending time with his favorite cat, Blue.  Boyd was a member of a Ham Radio Club as well as working on radio and TV repairs.  Second to none though was his enjoyment of spending time with his family, especially the grandchildren. He was a member of St. Henry’s Catholic Church.

Preceding him in death were his parents, a sister, Laverne Gage, a brother, Les Joens, a grandson, Pete Swedeen, his father and mother-in-law, brothers-in-law, Leo Gage, Lenny Galyen, and Sidney and Neale Schad.

Arrangements are with by the Furness Funeral Home at Clark where there is an on-line registry at www.furnessfuneralhome.com