Another Bureau of Indian Affairs road has closed due to a culvert washout. According to the CRST Department of Transportation, BIA Route 9, which connects the Armstrong area to Highway 63 has been closed after heavy rains caused a culvert to washout.

“About a month ago, storm water swirled above the pipe on the in-slope of the road. It washed a bunch of dirt away and the pipe caved in. Water started finding its way through. The downstream in-slope sluffed too. It’s pretty amazing that it washed around it enough to push the entire pipe out without washing out the entire road,” wrote CRST DOT Director Longbrake on the CRST Road Conditions Facebook Page.

On March 5, 2019, CRST Chairman Harold Frazier declared a state of emergency after the reservation received more than 30 inches of snow, resulting in ice jams, historic flood levels of the Cheyenne and Moreau Rivers, and consequently, inundated roads with icy flood water that caused wash outs, slide offs, and deterioration of infrastructure.

After heavy spring storms, the tribe again declared a state of emergency on May 29, 2019. Four BIA routes were closed due to damage, and another was placed under a travel advisory. At the time of the declaration, the Tribe issued a news release reminding the public that the roads were built and maintained by the Bureau of Indian Affairs.

In the latest incident involving BIA Route 9, Chairman Frazier issued a statement on July 22, emphasizing that the state of emergency still exists on CRST and “declared all BIA roads with culverts to be in critical condition.”

For weeks, BIA Route 7 was closed near mile marker 12, resulting in a detour that caused a longer commute. Numerous posts inquiring about the closure and hardship it created were shared on social media.

“The closing of multiple federal roads has isolated hundreds of square miles of reservation…” said the chairman.

In the latest statement, Chairman Frazier called the BIA roads “compromised and unsafe” and cited the two fatalities that occurred on July 9 on BIA Road 3, known as Kenel Road, after it washed out on neighboring Standing Rock Sioux Reservation.

Chairman Frazier stated, “No one grasps the magnitude of the damage to the roads here on the reservation. Everybody looks at the numbers and only accept the numbers that minimize the impact to avoid taking serious actions. The Bureau of Indian Affairs are responsible for these roads and the lack improvements, or even repairs, show a complete lack of leadership. The BIA is leaderless and it shows in our deteriorating roads that are a danger to my people.”

Calls to the Cheyenne River BIA Agency office were referred to the BIA Great Plains Regional Office. An official from that office refused to comment and referred this reporter to the media office in Washington DC. Messages left by phone and email were not answered as of press time. 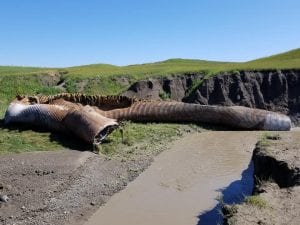 A culvert lays destroyed after it is washed out from BIA Route 9. Heavy and consistent rain has caused major deterioration of road conditions on CRST. Photo by Kevin Keckler posted on Facebook page 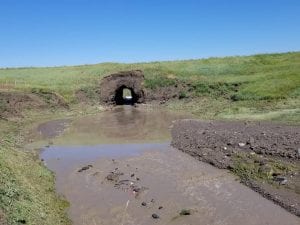 A large hole is left after a culvert washout on BIA Route 9 . Photo by Kevin Keckler posted on Facebook page