Beyond the checkpoints: How a S.D. Native American tribe is protecting its people from COVID-19

The Cheyenne River Sioux Tribe in north-central South Dakota has received extensive state and national press coverage in recent days after Gov. Kristi Noem threatened legal action if the tribe did not dismantle highway checkpoints it is using to manage traffic flow amid the COVID-19 pandemic.

The stalemate between the governor and the Cheyenne River and Oglala Lakota Sioux tribes remains, with checkpoints on state and federal highways still in place and Noem seeking but not yet finding a resolution to the conflict.

The controversy over the checkpoints has obscured the extensive and thus far highly successful effort of the Cheyenne River Sioux Tribe to prevent the deadly virus from infecting its roughly 12,000 residents, many who are poor or at high risk of complications or death from COVID-19.

As of May 19, the virus had infected nearly 4,100 people in South Dakota, including, according to tribal leaders, about 260 Native Americans.

But the sprawling Cheyenne River Indian Reservation has seen only one COVID-19 case in a woman who has since recovered. The tribe’s efforts to prevent the spread come as other American Indian tribes have suffered high numbers of cases, including the Navajo Nation in the southwestern U.S., where the rate of infection per 1,000 residents is now higher than in New York.

The Cheyenne River tribe did not wait to take action once the potential for health issues from the pandemic became clear, said Lynn Provost, CEO of Tribal Health Services on the reservation. Provost said the tribe enacted its own safety measures several days before President Trump declared a national emergency in mid-March.

“Our tribal administrators got on this problem right away; they really jumped on it,” Provost said. “Our infectious-control nurses have done an awesome job since then.” 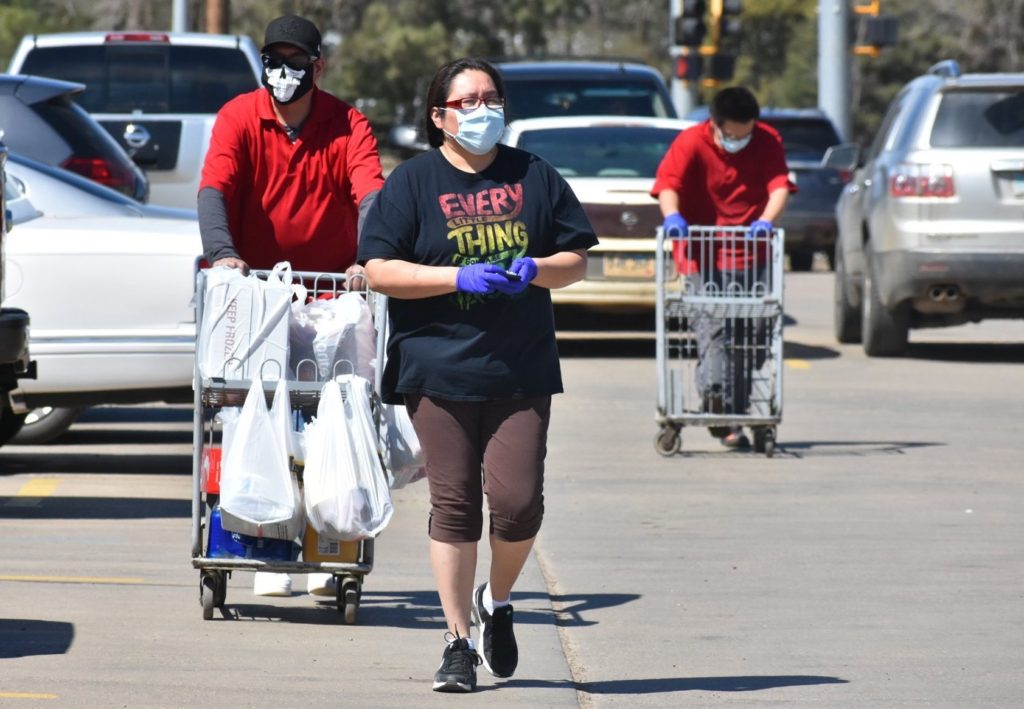 Strict rules are in place at Lakota Thrifty Mart grocery stores operated by the Cheyenne River Sioux Tribe, including mandatory use of masks and gloves by all patrons and employees and limits on how many people can shop at any one time. Photo: Courtesy of Alaina Beautiful Bald Eagle, West River Eagle newspaper

Compliance with mandatory and voluntary public-health efforts has been strong on the reservation, as many residents realize the great risk the virus poses to the population, and understand the limited ability of the tribal health-care system to react to a major outbreak.

“That makes it more dangerous for us, and there’s a mutual sense of safety as a result,” said Lt. Joseph Brings Plenty of the tribal police department. “If they’re willing to think about their neighbors, and their neighbors’ children, that this could potentially affect all of us, they tend to think about it differently.”

The tribe’s efforts to prevent the spread of the virus, prepare for a possible outbreak and protect the safety of residents of the reservation — both tribal and non-tribal members — began early in the pandemic and are continuing with vigor in a response that could serve as a model not only for other American Indian tribes but also for non-tribal communities across the country.

“If the rest of the world had been taking some of these actions, we wouldn’t have to,” said Remi Bald Eagle, the intergovernmental affairs coordinator for the tribe. “They are common-sense, proactive measures in regard to what’s happening on the reservation. All of these actions are being taken because of inaction around us.”